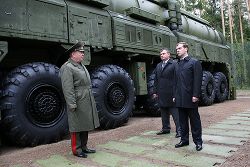 The 197th Rocket Engineer Brigade was formed on 20 June 1960 on the base of the 27th Separate Guards Artillery Brigade.[1] It was initially under the 46th Artillery Range Administration, but from 10.3.61 under the 3rd Independent Guards Missile Corps. It comprised the 594th, 602nd, 604th, and 621st Rocket Regiments. In May 1961 the Brigade was reorganized into the 54th Guards Order of Kutuzov Missile Division with Headquarters in the small town of Teykovo.

Since 1961, the 54th Division has performed 36 training launches.

On 27 November 1999 one of the regiments within the 54th Division received an honorable title Ivanovo.