The 56th (London) Infantry Division was an infantry division of the British Army. It was raised in 1908 upon the creation of the Territorial Force. The division served in the trenches of the Western Front during the Great War. Now part of the Territorial Army, the division saw active service in World War II in Tunisia and Italy. The division's insignia in the First World War was the sword of Saint George from the coat of arms of the City of London; in the Second World War the insignia was changed to a black cat.

The 1st London Division was created on the formation of the Territorial Force of the British Army in 1908. Its pre-war formation was:

On the outbreak of the conflict, the Division's pre-war establishment units were mobilised individually, rather than in their divisional formation and were initially used for garrison duty overseas in Malta or as reinforcements for other divisions on the Western Front. In January 1916, the Division was re-constituted as a fighting formation in the Abbeville district in France, and numbered the 56th (1/1st London) Division, so numbered as it was the last 1st Line TF division to serve overseas. For the remainder of the war, the Division saw action on the Western Front, taking part in all of the major campaigns and seeing severe fighting. It was demobilised in May 1919.

The Territorial Force was disbanded after the war but started to reform in early 1920 and was later renamed the Territorial Army and the division was reformed, as the 56th (1st London) Infantry Division, with much the same composition as before the First World War.[2]

However, between the wars, the division saw many changes as many of its units were transferred and converted into other roles, eventually leading to the division being reorganised as a motorised infantry division and renamed as The London Division, after the 47th (2nd London) Infantry Division was disbanded and converted into 1st Anti-Aircraft Division.[3] After the 47th Division, the London Division absorbed many of the units from the former 47th Division. 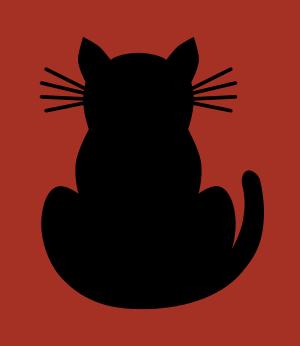 At the outbreak of war in September 1939, the division was mobilised as motorized infantry under the title of the 1st London Division. It was reorganised as an infantry division in June 1940 and renamed the 56th (London) Infantry Division on 18 November 1940. The divisional insignia during the Second World War was changed to an outline of a black cat in a red background. The cat stood for Dick Whittington's cat, a symbol of London.

The division remained in the United Kingdom during the Battle of France, moving to the Middle East in November 1942, where it served in Iraq and Palestine, until moving to Egypt in March 1943 and thence forward to Libya and the front, in April. This involved the division travelling some 2,300 miles (3,700 km) by road, a notable achievement and testament to the organization of the division and the ability of its mechanics and technicians. The division sat out the Allied invasion of Sicily (except for the 168th Brigade, which was attached to the understrength 50th Infantry Division) and moved to Italy in September 1943, where they fought in the landings at Salerno under the command of the US Fifth Army. During this time the 201st Guards Brigade joined the division, to replace the 168th Brigade. In January 1944, the 56th Division saw service in the Battle of Monte Cassino, serving there until March 1944 and participated in the Anzio Campaign. After being withdrawn to Egypt at the end of March, the division returned to Italy in July 1944, where it took part in the Battles along the Gothic Line and remained there until after Victory in Europe Day. During the fighting of 1944 and 1945, some of the infantry battalions that suffered heavy casualties were disbanded, to make up for an acute manpower shortage. The division also took part in Operation Grapeshot, the Allied offensive which ended the war in Italy.[4] 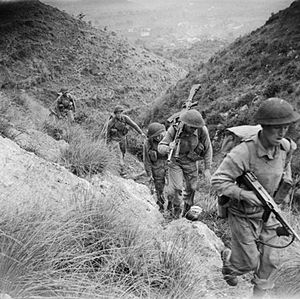 Members of the 10th Battalion, Royal Berkshire Regiment, climbing the heights of Calvi Risorta shortly after the invasion of Italy, October 1943

After crossing the Volturno in October 1943, the division entered the town of Calvi Vecchia. Their attempts to radio the US Fifth Army to cancel a planned bombing on the town failed. As a last resort, the 56th released an American homing pigeon named G.I. Joe, which carried a message that reached the allies just as the planes were being warmed up. The attack was called off and the town was saved from the planned air assault.[5][6]

The 56th Infantry Division was constituted as follows during the war:[7]

In 1946, the 56th Division was demobilised then re-constituted as the 56th (London) Armoured Division, T.A. The new formation included the 22nd Armoured Brigade and the 168th (Lorried) Infantry Brigade, with the Inns of Court and City Yeomanry acting as the divisional reconnaissance unit. The divisional artillery comprised:[13][14]

On 20 December 1955, the Secretary of State for War informed the House of Commons that the armoured divisions and the 'mixed' division were to be converted to infantry.[15] The 56th Division was one of the eight divisions placed on a lower establishment for home defence only.[16] The territorial units of the Royal Armoured Corps were reduced to nine armoured regiments and eleven reconnaissance regiments by amalgamating pairs of regiments and the conversion of four RAC units to infantry.

On 20 July 1960, a further reduction of the T.A. was announced in the House of Commons. The Territorials were to be reduced from 266 fighting units to 195. The reductions were carried out in 1961, mainly by the amalgamation of units. On 1 May 1961, the T.A. divisional headquarters were merged with regular army districts and matched with Civil Defence Regions, to aid the mobilisation for war.[17] The division ceased to exist as an independent entity and was linked to London District.

The 4th Battalion, Queen's Royal Surrey Regiment was formed in 1961, by the amalgamation of the 6th Battalion, East Surrey Regiment and the 23rd London Regiment, with a Battalion HQ and HQ Company at Kingston upon Thames.[18] It formed part of 47th (London) Infantry Brigade (56th London Division/District). An echo of the 56th Division emerged again from 1987–1993, when the public duties battalions in the London District were grouped as the 56th Infantry Brigade.