The ZiS-2 (Russian: ЗиС-2) was a Soviet 57-mm anti-tank gun used during World War II. The ZiS-4 was a version of the gun meant to be installed in tanks. ZiS stands for Zavod imeni Stalina (Russian Завод имени Сталина, "Factory named after Stalin"), the official title of Artillery Factory No. 92, which produced the gun first.

In the beginning of 1940 the design office of V. G. Grabin received from the Artillery Department the task to develop a powerful anti-tank gun. The head of this department Marshal Kulik and its subordinates estimated that the use of heavily armored tanks by the USSR in the Winter War didn't go unnoticed in Nazi Germany and would lead to development of similar fighting machines there. There is also a chance that the department was influenced by the German propaganda about the experimental multiturreted "supertank" NbFz. To this vehicle heavier armor was attributed than it actually had. Therefore, Grabin and its office were guided by the characteristics of the domestic heavy tank KV-1 with 40–75 mm armor. In the opinion of developers, the optimal calibre in this case was 57 mm. The velocity and mass of the armor-piercing 57 mm projectile allowed it to attain sufficient kinetic energy to penetrate up to 90 mm of RHA while keeping the gun sufficiently light, mobile and easy to conceal. However the decision also had a downside: this caliber was new to the Red Army, so the manufacturing of the projectiles had to be started from scratch.

Development started in May 1940 and in the beginning of 1941 the gun was adopted as 57-mm anti-tank gun model 1941 (ZiS-2) (Russian: 57-мм противотанковая пушка образца 1941 года (ЗиС-2)). Production began on June 1, 1941 but on December 1st, 1941 it was stopped by marshals N. N. Voronov and G. L. Govorov, their explanation being that ZiS-2 shells go right through weakly armored German tanks without doing much harm inside. Other possible reasons for the decision were high cost of the gun and problems with shell production. By then, 371 pieces were built.

The production lines were switched to manufacturing of the ZiS-3 76.2 mm divisional gun, while Soviet anti-tank artillery received cheaper 45 mm guns. Some anti-tank regiments also received the ZiS-3, which was able to defeat any German vehicle until late 1942.

Appearance of the heavy Tiger I and then the Panther changed the balance in favor of the Germans. 45 mm guns model 1942 could only pierce the side armor of the Panther, while the ZiS-3 managed to penetrate the sides from a longer distance. Against the Tiger, the ZiS-3 was effective only from the side at close range (up to 300 m), and 45 mm pieces were nearly helpless. A more powerful gun was needed and on June 15, 1943 the ZiS-2 once again entered service as 57-mm anti-tank gun model 1943. Until 1945 9,645 units were produced.

It is a semi-automatic gun with vertical block breech. When firing the block opens and closes automatically, the loader only has to put a round into the receiver. Due to this feature the rate of fire can reach 25 rounds per minute. The split-trail carriage with gunshield was shared with the ZiS-3 divisional gun. The carriage has coil spring suspension, which allows towing with a speed of up to 50 km/h (31 mph) on highways, 30 km/h (19 mph) on unpaved roads and 10 km/h (6.2 mph) off-road. The gun can also be attached to a limber and towed by a team of six horses. ZiS-2s are equipped with PP1–2 panoramic sight. 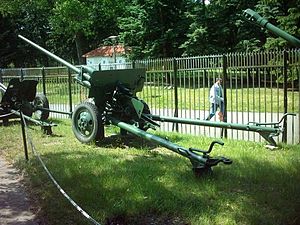 The ZiS-2 was also mounted on a few vehicles. In 1941 about a hundred ZiS-2 guns were mounted on Komsomolets armored tractor chassis to create the ZiS-30 tank destroyer.

The ZiS-2 gun was also mounted in at least three different prototypes based on the SU-76 assault gun (SU-74, SU-76D, and SU-57B). None were accepted for production.

There was also a tank gun version of ZiS-2, called ZiS-4. In 1941, trying to improve the anti-tank performance of the T-34 tank, members of the Morozov Design Bureau experimentally equipped it with the ZiS-4. Only a small number of these T-34-57 tanks were built and used as tank hunters. The idea resurfaced in 1943, after the Battle of Kursk, because Germany fielded heavily armoured Tiger and Panther tanks. Again only a limited number was produced, equipped with a slightly modified version of the gun, the ZiS-4M, that had a new breech which simplified production. Although the high-velocity gun had superior armour penetration to the F-34, the small weight of its shell meant that it could not fire an adequate high-explosive round for general use. The ultimate solution for the tank was to design a new turret allowing the use of an 85 mm gun; the new model was called the T-34-85.

A modernized version of the ZiS-2 was used in the ASU-57, a post-war self-propelled airborne antitank gun. 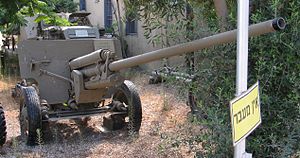 Due to fast improvement of tank armour protection ZiS-2 quickly lost its anti-tank value. In Soviet anti-tank artillery by mid-1950s ZiS-2 was replaced by more powerful 100 mm guns. However, its small size and weight kept it in active service with Soviet airborne troops for much longer. It was the fast improvement of rocket-based anti-tank weapons that eventually phased ZiS-2 out of use. All surviving ZiS-2s are believed to be memorial pieces or museum exhibits.

A North Korean ship smuggling weapons from Cuba on July 15, 2013 was discovered to be carrying ZiS-2 ammunition among other Soviet era weaponry and indicative that some examples remain active inside the North Korean Arsenal.[1] Until this incident Namibia was believed to be the last operator of the ZiS-2; the Namibian Defence Force continued to maintain six examples well into the 1990s.[2]