Railways with a railway track gauge of 5 ft/​1,524 mm were first constructed in the United Kingdom and the United States. Later this gauge was chosen as the common track gauge for the Russian Empire and its neighbouring countries, hence the name Russian gauge.[1] Later on it was redefined by Russian Railways to be 1520 mm (4 ft 11 27⁄32 in).[2]

See also: Track gauge in the United States and Confederate railroads in the American Civil War 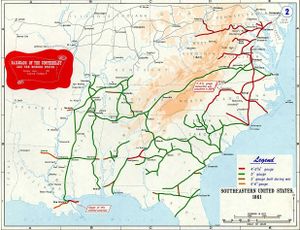 In 1827, Horatio Allen, the chief engineer of the South Carolina Canal and Rail Road Company, prescribed the usage of 5 ft (1,524 mm) gauge and many other railroads in Southern United States adopted this gauge. The presence of several distinct gauges was a major disadvantage to the Confederate States of America during the American Civil War. In 1886, when around 11,500 miles (18,500 km) of 5 ft gauge track existed in the United States, almost all of the railroads using that gauge were converted to 4 ft 9 in (1,448 mm).[5]

The first railway built in Russia was built in 1837 to 6 ft (1,829 mm) gauge for a 17 km long "experimental" line connecting the Imperial Palaces at Tsarskoye Selo and Pavlovsk; the choice of gauge was influence by Brunel's Great Western Railway which used 7 ft (2,134 mm). While of almost no practical importance the railway did demonstrate that this gauge was viable. The second railway in the Russian Empire was the Warsaw–Vienna railway (Congress Poland was then a part of the Empire) which was built to 1,435 mm (4 ft 8 1⁄2 in) and commenced construction in 1840.

For the building of Russia's first major railway, the Moscow – Saint Petersburg Railway, engineer Pavel Melnikov hired as consultant George Washington Whistler, a prominent American railway engineer. Whistler recommended 5 ft (1,524 mm) on the basis that it was cheaper to construct than 6 ft (1,829 mm) while still offering the same advantages over 1,435 mm (4 ft 8 1⁄2 in) and that there was no need to worry about a break-of-gauge since it would never be connected to the Western European railways. Colonel P.P. Melnikov, of the Construction Commission overseeing the railway, recommended 6 ft (1,829 mm) following the example of the first railway and his study of US Railways. Following a report sent by Whistler the head of the Main Administration of Transport and Buildings recommended 5 ft (1,524 mm) and it was approved for the railway by Tsar Nicholas I on February 14, 1843. The next lines built were also approved with this gauge but it was not until March 1860 that a Government decree stated all major railways in Russia would be 5 ft (1,524 mm) gauge.

Not selected for military purposes

It is widely and incorrectly believed that Imperial Russia chose a gauge broader than standard gauge for military reasons, namely to prevent potential invaders from using the rail system. In 1841 a Russian army engineer wrote a paper stating that such a danger did not exist since railways could be made dysfunctional by retreating forces.[citation needed] Also the construction of the Warsaw–Vienna railway in 1,435 mm (4 ft 8 1⁄2 in) was precisely so it could be connected to the Western European network, in that case to reduce Poland's dependence on Prussia for transport. Finally for the Moscow - Saint Petersburg Railway, which became the benchmark, the choice of track gauge was between 5 ft (1,524 mm) and the wider 6 ft (1,829 mm), not standard gauge 1,435 mm (4 ft 8 1⁄2 in).[6] Despite this the difference in gauge did play a role in hindering invading armies, especially in World War II, (see Operation Barbarossa#Faults of logistical planning), it was just not selected with that in mind.

The 5-foot gauge became the standard in the whole Russian Empire, and its successor Soviet Union (now the CIS states). That includes the Baltic states, Ukraine, Belarus, the Caucasian and Central Asian republics, Finland, and in the once Soviet-influenced Mongolia.

Russian engineers used it also on the Chinese Eastern Railway, built in the closing years of the 19th century across the Northeastern China entry to provide a shortcut for the Transsiberian Railway to Vladivostok. The railway's southern branch, from Harbin via Changchun to Lüshun, used the Russian gauge, but as a result of the Russo-Japanese War of 1904-1905 its southernmost section (from Changchun to Lüshun) was lost to the Japanese, who promptly regauged it to standard gauge (after using the narrow 3 ft 6 in (1,067 mm) for a short time during the war).[7] This formed a break of gauge between Changchun and Kuancheng (the station just to the north of Changchun, still in Russian hands),[8] until the rest of the former Chinese Eastern Railway was converted to standard gauge, too (probably in the 1930s).

Unlike in South Manchuria, the Soviet Union's reconquest of southern Sakhalin from Japan did not result in regauging of the railway system. Southern Sakhalin has continued with the original Japanese 1,067 mm (3 ft 6 in) gauge simultaneously with the Russian gauge railway, constructed in the northern part of the island in 1930-1932 (Moskalvo-Okha). The railway has no fixed connection with the mainland, and rail cars coming from the mainland port of Vanino on the train ferry (operating since 1973) have their bogies changed in the Sakhalin port of Kholmsk.[9] In 2004 and 2008 plans were put forward to convert it to Russian gauge. The estimated completion date now is 2030.[10]

There were proposals in 2013 for north-south and east-west lines in Afghanistan, with construction to commence in 2013.[11]

The Panama Railway, first constructed in ca. 1850, was built in 5 ft (1,524 mm) gauge. During canal construction (1904–1914), this same gauge was chosen for both construction traffic, canal operating services along the quays, and the newly routed commercial cross-isthmus railway. In 2000 the gauge for the commercial parallel railway was changed to 1,435 mm (4 ft 8 1⁄2 in) to use standard gauge equipment. The original gauge was chosen under the influence of the pre-conversion southern United States railway companies. Nowadays, the manoeuvering locomotives along the locks (mules) still use the 5 ft gauge that was laid during canal construction.

The first rail line in Finland was opened on January 31, 1862. As Finland was then the Grand Duchy of Finland; a region of Imperial Russia, railways were built to the then Russian track gauge of 5 ft (1,524 mm), although the railway systems were not connected until the Russian revolution in 1918. Russian trains could not have run in the Finnish tracks, because the Finnish loading gauge was narrower until the connection.

In the late 1960s the gauge was redefined to 1,520 mm (4 ft 11 27⁄32 in) in the Soviet Union.[3] At the same time the tolerances were tightened. As the running gear (wheelsets) of the rolling stock remained unaltered, the result was an increased speed and stability.[12] The conversion took place between 1970 and the beginning of the '90s.[12]

In Finland Finnish State Railways kept the original definition of 1,524 mm (5 ft), even though they also have lessened the tolerances in a similar way.

Estonia after independence redefined its track gauge to 1,524 mm to match Finland's.[13] The redefinitions did not mean that a lot of railways were changed. It was more a rule change regarding new and renovated tracks. See: Track gauge in Estonia.

If the gauge of the rolling stock is kept with certain limits, through running between 1,520 mm (4 ft 11 27⁄32 in) railways and Finnish 1,524 mm (5 ft) railways is allowed. Since both 1520 and 1524 are well within tolerances, the difference can be said to be mostly a paper difference. However, certain Finnish rolling stock do have a tendency to get stuck in Russian railyards due to too narrow gauge.

The new international Sm6 high-speed train between Helsinki and St. Petersburg is specified as 1522 mm gauge.[15] High-speed trains have less tolerance against gauge error, but this way through running works well.

Short sections of Russian gauge extend into Poland, eastern Slovakia, Sweden (at the Finnish border at Haparanda), and northern Afghanistan.[16]

There is an approximately 150 km long section in Hungary in the Záhony logistics area close to the Ukrainian border.[17] During the recent renovation a 32 km section of dual Standard/Russian gauge was installed between Tumangang and Rajin stations in the DPRK.[18]

The most western 1,520 mm gauge railway is the Polish LHS (Linia Hutnicza Szerokotorowa) from the Ukrainian border to the eastern end of the Silesian conurbation.

Use in rapid transit and light rail systems