From Infogalactic: the planetary knowledge core
(Redirected from 613 mitzvot)
Jump to: navigation, search

The tradition that 613 commandments (Hebrew: תרי"ג מצוות‎: taryag mitzvot, "613 mitzvot") is the number of mitzvot in the Torah, began in the 3rd century CE, when Rabbi Simlai mentioned it in a sermon that is recorded in Talmud Makkot 23b.[1]

These principles of Biblical law are sometimes called connections or commandments (mitzvot) and referred to collectively as the "Law of Moses" (Torat Moshe, תורת משה), "Mosaic Law", "Sinaitic Law", or simply "the Law". The word mitzvot is plural; singular is mitzvah.

The 613 mitzvot have been divided also into three general categories: mishpatim; edot; and chukim. Mishpatim ("laws") include commandments that are deemed to be self-evident, such as not to murder and not to steal. Edot ("testimonies") commemorate important events in Jewish history. For example, the Shabbat is said to testify to the story that Hashem created the world in six days and rested on the seventh day and declared it holy. Chukim ("decrees") are commandments with no known rationale, and are perceived as pure manifestations of the Divine will.[4]

Many of the mitzvot cannot be observed now, following the destruction of the Second Temple, although they still retain religious significance. According to one standard reckoning,[5] there are 77 positive and 194 negative commandments that can be observed today, of which there are 26 commands that apply only within the Land of Israel.[6] Furthermore, there are some time-related commandments from which women are exempt (examples include shofar, sukkah, lulav, tzitzit and tefillin).[7] Some depend on the special status of a person in Judaism (such as kohanim), while others apply only to men or only to women. 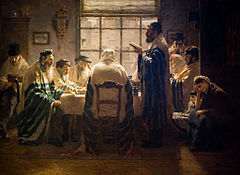 According to the Talmud (tractate Makkoth 23b), Deut. 33:04 is to be interpreted to mean that Moses transmitted the "Torah" from God to the Israelites: "Moses commanded us the Torah as an inheritance for the community of Jacob".

The Talmud notes that the Hebrew numerical value (gematria) of the word "Torah" is 611, and combining Moses's 611 commandments with the first two of the Ten Commandments which were the only ones heard directly from God, adds up to 613.[8] The Talmud attributes the number 613 to Rabbi Simlai, but other classical sages who hold this view include Rabbi Simeon ben Azzai (Sifre, Deuteronomy 76) and Rabbi Eleazar ben Yose the Galilean (Midrash Aggadah to Genesis 15:1). It is quoted in Midrash Shemot Rabbah 33:7, Bamidbar Rabbah 13:15–16; 18:21 and Talmud Yevamot 47b.

Many Jewish philosophical and mystical works (e.g. by Baal ha-Turim, the Maharal of Prague and leaders of Hasidic Judaism) find allusions and inspirational calculations relating to the number of commandments.

The tzitzit ("knotted fringes") of the tallit ("[prayer] shawl") are connected to the 613 commandments by interpretation: principal Torah commentator Rashi bases the number of knots on a gematria: the word tzitzit (Hebrew: ציצת (Biblical), ציצית, in its Mishnaic spelling) has the value 600. Each tassel has eight threads (when doubled over) and five sets of knots, totalling 13. The sum of all numbers is 613. This reflects the concept that donning a garment with tzitzit reminds its wearer of all Torah commandments.[9]

Rabbinic support for the number of commandments being 613 is not without dissent and, even as the number gained acceptance, difficulties arose in elucidating the list. Some rabbis declared that this count was not an authentic tradition, or that it was not logically possible to come up with a systematic count. No early work of Jewish law or Biblical commentary depended on the 613 system, and no early systems of Jewish principles of faith made acceptance of this Aggadah (non-legal Talmudic statement) normative. The classical Biblical commentator and grammarian Rabbi Abraham ibn Ezra denied that this was an authentic rabbinic tradition. Ibn Ezra writes "Some sages enumerate 613 mitzvot in many diverse ways [...] but in truth there is no end to the number of mitzvot [...] and if we were to count only the root principles [...] the number of mitzvot would not reach 613" (Yesod Mora, Chapter 2).

Nahmanides held that this particular counting was a matter of rabbinic controversy, and that rabbinic opinion on this is not unanimous. Nonetheless, he concedes that "this total has proliferated throughout the aggadic literature... we ought to say that it was a tradition from Moses at Mount Sinai" (Nahmanides, Commentary to Maimonides' Sefer Hamitzvot'', Root Principle 1).

Rabbi Simeon ben Zemah Duran likewise rejected the dogma of the 613 as being the sum of the Law, saying that "perhaps the agreement that the number of mitzvot is 613... is just Rabbi Simlai's opinion, following his own explication of the mitzvot. And we need not rely on his explication when we come to determine [and affect] the Law, but rather on the Talmudic discussions" (Zohar Harakia, Lviv, 1858, p. 99).

Even when rabbis attempted to compile a list of the 613 commandments, they were faced with a number of difficulties:

Ultimately, though, the concept of 613 commandments has become accepted as normative amongst practicing Jews and today it is still common practice to refer to the total system of commandments within the Torah as the "613 commandments", even among those who do not literally accept this count as accurate.

However, the 613 mitzvot do not constitute a formal code of present-day halakha. (See Halakha: Codes of Jewish law.) The most widely recognized code is the Shulkhan Arukh, written by Rabbi Yosef Karo (Safed, Israel, 1550). For Sephardic Jewry, this is generally the accepted code. Ashkenazim, however, customarily follow the glosses appended to the Shulchan Arukh by Rabbi Moses Isserles. The Kitzur Shulkhan Arukh of Rabbi Shlomo Ganzfried (Hungary 1804 -1886) is also popular among Ashkenazic Jews. Although it is often criticized, it contains an overview of the rules of Ashkenazi Jewish life according to the minhagim followed by Hungarian Jewry. This is why it is not accepted by all Ashkenazic rabbinic authorities. However, Maimonides did write his Mishneh Torah while keeping in mind all of the 613 mitzvot.

There is no single definitive list that explicates the 613 commandments. Lists differ, for example, in how they interpret passages in the Torah that may be read as dealing with several cases under a single law or several separate laws. Other "commandments" in the Torah are restricted as one-time acts, and would not be considered as "mitzvot" binding on other persons. In rabbinic literature, Rishonim and later scholars composed to articulate and justify their enumeration of the commandments:

The following are the 613 commandments and the source of their derivation from the Hebrew Bible as enumerated by Maimonides: