The 62nd Order of Lenin Army (Russian: 62-я армия) was a field army established by the Soviet Union's Red Army during the Second World War. Formed as the 7th Reserve Army as part of the Reserve of the Supreme High Command in May 1942, the formation was designated as the 62nd Army the following month. After an epic combat performance in the Battle of Stalingrad, the 62nd Army was granted Guards status and renamed the 8th Guards Army in April 1943. 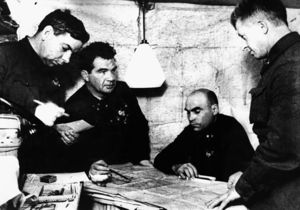 The 7th Reserve Army was formed 28 May 1942 as part of the Stavka Reserve (RVGK). Within one month, this force had been redesignated the 62nd Army. From mid August 1942 until late January 1943, the 62nd Army, under the command of General Vasily Chuikov, fought in the Battle of Stalingrad. 62nd Army conducted an epic defense of the city against repeated and desperate attacks by the German 6th Army. The Army, along with the 64th Army, was operating under the Soviet Stalingrad Front. After the German assault at Stalingrad had come to utter disaster, the 62nd Army was uniquely awarded the Order of Lenin, and granted Guards status as the 8th Guards Army.