The shoulder sleeve insignia of the division was designed by its then commander Maj. Gen. Charles L. Bolte with the red, white and blue being the colours of the United States forming a "6" and a "9".[1] 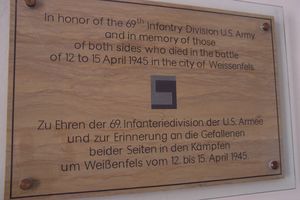 The 69th Infantry Division arrived in England, 12 December 1944, where it continued its training.

It landed in Le Havre, France, 24 January 1945, and moved to Belgium to relieve the 99th Division, 12 February, and hold defensive positions in the Siegfried Line. The division went over to the attack, 27 February, capturing the high ridge east of Prether to facilitate use of the Hellenthal-Hollerath Highway.

In a rapid advance to the east, the 69th took Schmidtheim and Dahlem, 7 March. The period from 9 to 21 March was spent in mopping up activities and training. The division resumed its forward movement to the west bank of the Rhine, crossing the river and capturing the fortress of Ehrenbreitstein, 27 March.

It relieved the 80th Division in Kassel, 7 April, seized Hannoversch Münden on the 8th and Weissenfels on the 14th against sharp opposition, and captured Leipzig, 18 April, following a fierce struggle within the city. Eilenburg fell, 23 April, and the east bank of the Mulde River was secured.

Two days later, division patrols in the area between the Elbe and the Mulde Rivers contacted elements of the Soviet 5th Guards Army in the vicinity of Riesa and again at Torgau on Elbe Day. Until VE-day, the 69th patrolled and policed its area. Occupation duties were given to the division until it left for home and inactivation 7 September.

In 1954 the 69th Division was recreated as a training division at Fort Dix, New Jersey replacing the 9th Infantry Division that was sent to Europe. the 69th was deactivated in March 1956.[2] The shoulder patch of the 69th was worn by the actors playing soldiers on The Phil Silvers Show.