The 6th Infantry Division was a unit of the United States Army in World War I, World War II, and the last years of the Cold War. Known as "Red Star", and formerly called the "Sight Seein' Sixth".[1]

The division moved to Hawaii in July and August 1943 to assume defensive positions on Oahu, training meanwhile in jungle warfare. It moved to Milne Bay, New Guinea, 31 January 1944, and trained until early June 1944. The division first saw combat in the Toem-Wakde area of Dutch New Guinea, engaging in active patrolling 14–18 June, after taking up positions 6–14 June. Moving west of Toem, it fought the bloody Battle of Lone Tree Hill, 21–30 June, and secured the Maffin Bay area by 12 July.

After a brief rest, the division made an assault landing at Sansapor, 30 July, on the Vogelkop Peninsula. The 6th secured the coast from Cape Waimak to the Mega River and garrisoned the area until December 1944.

The division landed at Lingayen Gulf, Luzon, in the Philippines on D-day, 9 January 1945, and pursued the Japanese into the Cabanatuan hills, 17–21 January, capturing Muñoz on 7 February. On 27 January, Special Operations units also attached to the Sixth United States Army took part in the Raid at Cabanatuan. The division then drove northeast to Dingalan Bay and Baler Bay, 13 February, isolating enemy forces in southern Luzon. The U.S. 1st Infantry Regiment operated on Bataan together with the Philippine Commonwealth forces, 14–21 February, cutting the peninsula from Abucay to Bagac.

The division then took part in the Battle of Manila, shifting to the Shimbu Line northeast of Manila, 24 February, took Mount Mataba, 17 April, Mount Pacawagan, 29 April, Bolog, 29 June, Lane's Ridge of Mount Santo Domingo, 10 July, and Kiangan, 12 July. The 6th remained with the Philippine Military forces in the Cagayan Valley and the Cordilleras Mountains until VJ-day.

Afterwards it moved to occupy Korea. The division occupied the southern half of the United States zone of occupation until inactivated.

Medal of Honor recipients for the 6th Infantry Division during World War II:

The 6th Division was reactivated 4 October 1950 at Fort Ord, California. There the division remained throughout the Korean War, training troops and providing personnel for combat, but was never deployed overseas as an entity itself and was again inactivated on 3 April 1956.

In the American build-up during the Vietnam War the division was activated in 1967 at Fort Campbell, Kentucky, and later a forward brigade was located in Hawaii.[3] There was sentiment against sending the division to Vietnam because its shoulder sleeve insignia invited a derisive nickname ("Commie Jew Division") that General Westmoreland, cognizant of troop morale problems, considered too offensive, and the decision was made instead to form the Americal Division (23rd Infantry Division), with less offensive insignia, in Vietnam itself. During June 1968 the US Joint Chiefs of Staff also declared the 6th Infantry Division unsuitable for combatant deployment because it flunked its readiness report, and shortly thereafter the division was terminated on 25 July 1968.[4]

The last incarnation of the division came on 16 October 1986 at Fort Richardson, Alaska when the assets of the 172nd Infantry Brigade were used to reactivate the 6th Infantry Division (Light). Over the next seven years the 6th was the U.S. Army’s primary Arctic warfare division. Notable operational deployments included an eight-month deployment to the Sinai Peninsula in Egypt by 1st Battalion, 17th Infantry Regiment, a subordinate element of 1st Brigade, 6th Infantry Division (Light), in 1990 as part of the Multinational Force and Observers. The deployment began as a six-month rotation but was extended in August 1990 due to the Iraqi invasion of Kuwait which precipitated Operation Desert Shield and delayed the arrival of their relieving unit. The division headquarters was moved from Fort Richardson to Fort Wainwright (near Fairbanks) in 1990.[5] Commanders during the Arctic activation included Maj. Gen. David A. Bramlett, Maj. Gen. Samuel E. Ebbessen [3] (a former deputy of General Schwarzkopf during the Persian Gulf War who went on to direct hurricane relief in Florida in 1992, ultimately being relieved from that position), and Maj. Gen. Johnnie H. Corns.[6] The division had two active maneuver brigades and the Army Reserve's 205th Infantry Brigade (Light) was assigned as the division's roundout force. 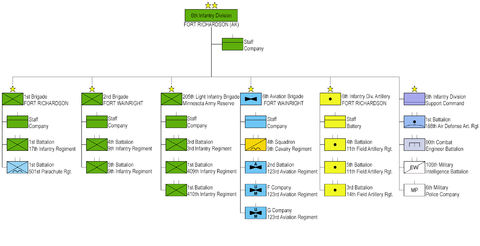 The division was inactivated most recently on 6 July 1994, and reduced to a single brigade, the 1st Brigade, 6th Infantry Division. In reality, the 6th no longer existed as a division and command of the brigade fell under the 10th Mountain Division (Light Infantry) at Fort Drum, NY. The division's number was kept on the rolls because the U.S. Army Chief of Staff stated he would not preside over the inactivation of another division during his term.[citation needed] Later the brigade was reflagged back to the separate 172nd Infantry Brigade from which the division had been reestablished in 1986. The 172nd Brigade was then reflagged as the 1st Brigade Combat Team (Stryker), 25th Infantry Division on 16 December 2006.[8]

On 16 October 2008 the division's HHC 6th Engineer Battalion [4] was reactivated as a non-divisional unit in Alaska.[5] In this new role it is configured as an Airborne unit with two subordinate engineer companies: the 23d Engineer Company [6] and the 84th Engineer Company.[7]