The design works of ZiS-3 started in the end of 1940 on the Artillery Factory No. 92 under supervision of V. G. Grabin, the chief designer of medium caliber Soviet guns. There was no order for this work; moreover, at this time the attitude toward such development programs on the part of artillery commanders, such as Marshal Kulik, the head officer of Soviet artillery, was extremely negative. So the project was run purely on the initiative of Grabin, his design bureau and the Artillery Factory No. 92 head and his deputies. None of them informed state authorities (i.e. Marshal Kulik) about the ZiS-3 project.

The ZiS-3 was a combination of the light carriage from the 57 mm ZiS-2 anti-tank gun and a powerful 76.2 mm barrel from the previous divisional field gun F-22USV. In order to decrease the gun's recoil a muzzle brake was installed. This allowed the barrel to be mounted on a relatively light carriage without the risk of mechanical damage when firing. In comparison with the F-22USV gun, the ZiS-3 utilized better production technology. Many parts of the gun were cast, stamped or welded in order to reduce the amount of machine work. As a result, the amount of work required to construct a single ZiS-3 gun was one third that of the F-22USV gun. Furthermore, the cost to produce a ZiS-3 gun was only two thirds that of an F-22USV.

After having been built, the first ZiS-3 gun was hidden from the watchful eyes of state authorities, who continued to ignore the Red Army's need for light and medium field guns. The authorities' main argument was the information that German heavy tanks carried exceptionally strong armour. In reality Germany did not have such tanks in early 1941 and this misinformation was the result of successful Nazi propaganda about the Neubaufahrzeug multi-turreted prototype tank. Marshal Kulik had believed the propaganda and sent orders to stop the production of light 45 mm anti-tank guns and 76.2 mm divisional field guns.

The beginning of the Great Patriotic War showed that German tanks had weaker armour than was anticipated. Some were even vulnerable to large caliber DShK machine guns. Pre-war models of 76 mm divisional guns penetrated German vehicles with ease, but almost all these guns were lost in battles or captured by Germans in holding facilities. Some of them were later used against Soviet forces as different kinds of Panzerjäger self-propelled guns. Marshal Kulik ordered that mass production of 76.2 mm divisional field F-22USV guns be relaunched. Grabin and the head staff of Artillery Factory No. 92 decided to organize the mass production of ZiS-3 guns instead of F-22USVs. They succeeded, but ZiS-3 was not officially tested and adopted for Red Army service.

Red Army soldiers were in urgent need of these guns, the guns themselves were fine and numerous due to improved production technology, but all of them were in stock at Artillery Factory No. 92, since the military representatives refused to receive non-official guns. After some internal struggle between Grabin's team and military representatives, ZiS-3 guns were finally transferred to the Red Army under personal responsibility of Grabin and Artillery Factory No. 92 head staff.

Combat experience showed the superiority of ZiS-3 over all other types of divisional level field guns. This allowed the ZiS-3 to be presented to a group of state authorities headed by Joseph Stalin and thus obtain all needed approval. After the demonstration was over Stalin said: "This gun is a masterpiece of artillery systems design." There was a five-day official state test run in February 1942. The result of this test was quite clear - ZiS-3 was adopted by the Red Army as divisional field gun model 1942 (full official name).

Grabin and his team soon begun to improve on the technology used in the ZiS-3 mass production. Artillery Factory No. 92 was equipped by conveyor assembly lines, which allowed the factory to produce ZiS-3 in even greater numbers with a low qualification workforce but without significant quality loss. Experienced laborers and engineers worked on complicated equipment and served as brigade leaders. Some of the young men who worked on Artillery Factory No. 92 were exempt from conscription. They learned the production process well and became high quality workers and engineers. This was yet another boost for the ZiS-3 production volume. As a result, at the end of World War II, ZiS-3 was the most numerous Soviet Army field gun. The total number of ZiS-3s produced exceeded 103,000 pieces.

An attempt was made to mount the ZiS-3 on a light assault car. The resulting KSP-76 vehicle never made it beyond the prototype stage.

After the war ZiS-3 mass production ceased. It was replaced by the next model of divisional field gun, D-44, which had a larger caliber (85 mm) and better anti-armour capabilities. But it weighed much more and its mobility was thus inferior to that of the ZiS-3.

The Romanian TACAM R-2 self-propelled anti-tank gun featured the ZiS-3 on the chassis of the R-2 tank, in a three-sided fighting compartment. 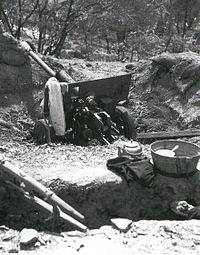 An abandoned Soviet-made North Korean ZiS-3 on a hill overlooking Incheon harbor after its capture by United Nations forces during the amphibious landings at Incheon in mid-September 1950.

Soviet soldiers liked ZiS-3 guns for their extreme reliability, durability, and accuracy. It was easy to maintain these guns and train novice crews with them. A light carriage allowed the ZiS-3 to be towed by trucks and heavy jeeps (such as the American lend-leased Dodge 3/4) or even hauled by the crew.

ZiS-3 had good anti-armour capabilities, and could knock out any German light and medium tank with its armour-piercing round. The appearance of the Tiger I and later the Panther, however, made the lives of ZiS-3 crews much harder, for their frontal armour was immune except for some small ballistic windows.

A battery of ZiS-3 consisted of four guns, with three batteries combined into a division, or battalion. Independent anti-tank regiments consisted of six batteries with no divisions. In addition to the gun batteries there was a staff battery which included a fire control section.

In the Cold War many ZiS-3s were transferred to different Soviet allies. From there ZiS-3s were often resold to Third World countries. Armies of several African and Asian countries have ZiS-3s in active service today. Moreover, these guns are still used in combat during numerous local conflicts and border skirmishes.

Soviet ZiS-3s were officially withdrawn from active service. Some of them were scrapped, some were transferred to holding facilities and others were converted to Great Patriotic War memorial signs. These memorial cannons are quite common in modern Russia and Belarus. In Russian Army some ZiS-3s are used as decorations of buildings and gardens in artillery units quarters; another part of survived ZiS-3s is still operable. Sometimes ZiS-3s are used as small salute guns or in history-dedicated military shows.