The 77th Sustainment Brigade is a unit of the United States Army that inherited the lineage of the 77th Infantry Division ("Statue of Liberty"[1]), which served in World War I and World War II. Its headquarters is now at Fort Dix, New Jersey after its predecessor command, the 77th Regional Readiness Command, was disestablished in 2008 from Fort Totten, in Bayside (Queens), New York. Soldiers from the 77th have served in most every major conflict and contingency operation since World War II. Five soldiers from the 77th lost their lives in the September 11 attacks, while serving in their civilian duties.[2]

The division was nicknamed the "Statue of Liberty Division"; the shoulder patch bears the Statue of Liberty in gold on a blue truncated triangle. US Marines on Guam nicknamed them the "77th Marine Division". The Clearview Expressway in Queens, New York is named the "77th Infantry Division Expressway", honoring the division's personnel who hailed from Queens and Long Island.

The 77th Infantry Division was organized from draftees, drawn mostly from New York City, and trained at Camp Upton in Yaphank, NY in the central part of Suffolk Country, Long Island; the camp is now Brookhaven National Laboratory. The division consisted of the 153rd and 154th Infantry Brigades.

The 77th Infantry Division was the first American division composed of draftees to arrive in France in World War I, landing in April 1918; overall it was the seventh of 42 divisions to reach France. The division fought in the Battle of Château-Thierry on 18 July 1918.

The 154th Infantry Brigade was composed of the 307th and 308th Infantry Regiments and the 306th Machine Gun Battalion.[3] While the division had been recruited as a National Army unit from the New York City area, attrition and replacements had complicated the complexion of the unit. For example, Company K, 307th Infantry, had been redesignated from the former Company L, 160th Infantry, California Army National Guard. The company had belonged to the 40th Division, which had been converted into a depot division in August 1918. 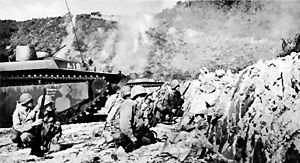 The 77th Infantry Division landed in Hawaii, 31 March 1944, and continued training in amphibious landings and jungle warfare. Elements began to leave Hawaii, 1 July 1944, for the amphibious assault on Guam. Attached to III Amphibious Force, the 77th made an assault landing on Guam, 21 July 1944. After taking over defense of the beachhead, the division drove north to seize Mount Tenjo and effected junction with the 3d Marine Division, linking the northern and southern bridgeheads, 23–29 July. It continued to drive north, and dislodged the enemy from positions at Barrigada town and mountain, 4 August, resistance ending on 8 August. With Guam recaptured, the 77th sailed for New Caledonia, but plans were changed en route and it was directed to proceed to Leyte. The division landed on the east coast of Leyte, 23 November 1944, and was attached to XXIV Corps, Sixth Army. After a short period of training and combat patrolling in the Corps' rear, 23 November-6 December, it landed at Ipil and fought up the east coast of Ormoc Bay to seize Ormoc, 10 December. Attacking north, astride Highway No. 2, the division secured Valencia and the Libungao-Palompon road junction. Mopping up operations continued through January 1945 to 5 February 1945.

The next combat assignment was Okinawa. In late March (26–29), the division made 15 landings, securing Kerama Retto and Keise Shima for the assault on Okinawa. Riding at sea, 1–15 April 1945, it suffered casualties from enemy suicide attacks, – and prepared for the assault landing on Ie Shima. On 16 April 1945, the 77th landed on Ie Shima, captured the airfield, and engaged in a bitter fight for "Government House Hill" and "Bloody Ridge." It was in this operation that Ernie Pyle was killed. On 25 April, it left Ie Shima for Okinawa, relieving the 96th Division, 28 April 1945. Fighting its way slowly against extremely heavy Japanese resistance, the division drove to Shuri in conjunction with the 1st Marine Division, occupying it 29–31 May. In June the division covered the right flank of XXIV Corps and "sealed" Japanese cave positions. In July the division moved to Cebu, Philippine Islands, and prepared for the proposed invasion of Japan. The division landed in Japan in October 1945 for occupation duty, and was inactivated a few months later, 15 March 1946. 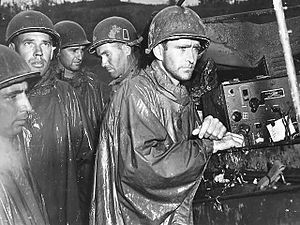 Men of the 77th Infantry division listen to radio reports of Germany's surrender on 8 May 1945.

The lineage of the 77th Infantry Division is perpetuated today by the 77th Sustainment Brigade, a unit of the Army Reserve, with its headquarters at Fort Dix, N.J. In 2011, the brigade deployed to Iraq in support of Operation New Dawn. The brigade headquarters was stationed in Balad, Iraq and held logistical responsibility for the re-posturing of forces in northern Iraq. The unit's motto is "Liberty Warriors."