A portion of Pine Swamp Road in Mineral County, West Virginia was named "WWII 78th Lightning Division Road" in honor of the division by the West Virginia Legislature.[2][3] A portion of Interstate 78 in Pennsylvania is also named after the 78th division.

File:78th Division Private.jpg
Private James W. Brown of the United States Army's 78th Infantry Division. He was part of the 308 Supply Company Field Artillery during World War I. The photo was taken somewhere in France during his tour in the war

The division was originally allocated to New York and northern Pennsylvania in the National Army plan. Whilst the HQ of the 78th Division was activated in August, with the first draftees arriving in September, it was not fully active until early 1918. It was transported to France in May and June 1918.

In France, during the summer and fall of 1918, it was the "point of the wedge" of the final offensive which knocked out Germany. The 78th was in three major campaigns during World War I – Meuse-Argonne, St. Mihiel, and Lorraine. Demobilization at the end of the war took place in June 1919.

HQ, 78th Division was returned to the Organized Reserve List, and reallocated to the Second US Corps in Spring of 1921, with its area of allocation changed to New Jersey and Delaware. 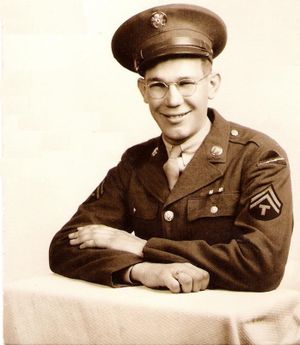 Evert VanderRoest, before being sent to Europe as a part of the United States Army's 78th Infantry Division during World War II.

In World War II, the 78th Division was reactivated at Camp Butner, North Carolina on 15 August 1942. It was designated as a replacement pool division on 1 October 1942, and remained in this assignment until 1 March 1943, when the 78th Division was restored to field duty, and to its training regimen. 78th Division moved to the Carolina Maneuver Area on 15 November 1943 to test its training, and then returned to Camp Butner on 7 December 1943. The personnel then went on Christmas leave, and deployed to the Tennessee Maneuver Area on 25 January 1944, where they participated in the 5th Second Army Tennessee Maneuvers. They then moved to Camp Pickett, Virginia, where they filled their TO&E,(table of organization and equipment), then deployed to the staging area at Camp Kilmer, NJ on 4 October 1944.

After two years as a training division, the 78th embarked for the European Theatre from the New York POE on 14 October 1944, whereupon they sailed for England. They arrived on 26 October 1944, and after further training crossed to France on 22 November 1944.

After landing in France, the division moved to Tongeren, Belgium on 27 November 1944, and to Rotgen, Germany on 7 December 1944, to prepare for combat. The 311th Infantry Regiment was attached to the 8th Armored Division in the Hurtgen Forest, 10 December. The 309th and 310th Infantry Regiments relieved elements of the 1st Division in the line in the vicinity of Entenpfuhl, 1–12 December. On the 13th these regiments smashed into Simmerath, Witzerath, and Bickerath and were fighting for Kesternich when Gerd von Rundstedt launched his counteroffensive in the Monschau area, on 18 December.

The 78th held the area it had taken from the Siegfried Line against the violent German attacks throughout the winter. The Division attacked, 30 January 1945, and took Kesternich, 2 February, the town of Schmidt on the 8th, and captured intact the vital Schwammanauel Dam the next day. In the advance, the Roer River was crossed, 28 February, and the division joined the offensive of the First and Ninth Armies toward the Rhine. That river was crossed over the Ludendorff Bridge at Remagen, 8 March, by the 310th Regiment, the first troops to cross in the wake of the 9th Armored Division. That unit, attached to the 9th Armored and acting as a motorized unit had driven across Germany capturing Euskirchen, Rheinbach, and Bad Neuenahr. The 78th expanded the bridgehead, taking Honnef and cutting part of the Autobahn, 16 March. From 2 April to 8 May, the division was active in the reduction of the Ruhr Pocket and at VE-day was stationed near Marburg. The division remained on occupation duty in Germany until it was deactivated on 22 May 1946.

In November 1946, the 78th Infantry Division was reactivated at Newark, New Jersey and in May 1959 it was reorganized as a Training Division.

The 78th Division was deployed to Southwest Asia 1990 and 1991 when the 920th Transportation Company (Medium, Petroleum) to support operations in Desert Storm. The 1018th Reception Battalion, the 2nd Brigade OSUT Headquarters, and the 1st and 3rd Battalion of the 310th Regiment as well as the 1st Brigade's 3rd Battalion, 309th Regiment with a composite detachment from the 78th Training Support Brigade, provided assistance in necessary training base expansion at Fort Dix. The 348th MP Detachment conducted protective service missions for key national leaders throughout the world during the mobilization period. In addition, many individuals from the 78th served as "fillers" in other deployed units..

In 1992, the division transformed into an exercise division under the Army's "Bold Shift" initiative. The new mission is to conduct small unit collective training (LANES) and computerized battle simulation exercises for client units in the First Army East area (a 14 state region). Like the other exercise divisions, the 1st Brigade was designated as the simulations exercise unit, conducting Battle Command and Staff Training for USAR and Army National Guard units at the battalion, brigade, command, and division levels. This training uses the simulations models used by the Regular Army in conducting WARFIGHTER exercises. The other brigades within the division (2d through 5th depending on the division) conducted field training for units at the squad, platoon, and company levels. In all units, then made up of US Army Reserve soldiers, there were detachments of Regular Army soldiers assigned to manage the day-to-day requirements and planning of exercises as part of the Congressionally mandated Ground Forces Readiness Enhancement (GFRE – popularly known as "Jeffries") program. This program was partially instituted to ensure that reserve component units would have continual training support in order to preclude some of the training and readiness problems that were discovered in the ramp-up, and eventual deployments, in support of Desert Storm.

One of five exercise divisions in the United States Army, the 78th Division Headquarters, and its 1st Brigade, were for many years headquartered at the Kilmer Reserve Center (the former Camp Kilmer) in Edison, New Jersey with subordinate units located in New Jersey, Rhode Island, Massachusetts, Virginia, Maryland, Pennsylvania and New York.

As a result of the 2005 BRAC, the division's headquarters and its 1st Brigade were relocated to Fort Dix, New Jersey, joining the already located Division's 2d Brigade (LANES) and some 1st Brigade (BCST) subordinate elements.

In late 1999, the division was redesignated from 78th Division (Exercise) to 78th Division (Training Support) to reflect the growing change in the type of training provided by the division's units. There was also an associated change in the manning of the unit, adding National Guard personnel to the regulars and Army Reservists already assigned. This was one of the first instances of the growing multi-component organization of US Army units that deal with Reserve Component training and operations.

The 4th Brigade is a tenant unit on Fort Bragg with Headquarters at the 78th Division (Training Support), Edison, New Jersey. The brigade's responsibility is to train, coach, teach and mentor the Reserve and Army National Guard units of North Carolina.