The 79th Infantry Division ("Cross of Lorraine"[1]) was a unit of the United States Army in World War I and World War II.

The division was first activated at Camp Meade, MD in August 1917, composed primarily of draftees from Maryland and Pennsylvania. After a year of training the division sailed overseas in July 1918. The 79th Division saw extensive combat in the Meuse-Argonne area where it earned the name of "Cross of Lorraine" for their defense of France. The division was inactivated June 1919 and returned to the United States. Throughout its entire World War I campaign, the division suffered 6,874 casualties with 1,151 killed and 5,723 wounded.

The division was activated at Camp Pickett, Virginia on June 15, 1942. It participated in the Tennessee Maneuver Area, after which it moved to Camp Laguna near Yuma, Arizona, where it trained in the desert. It was then ordered to Camp Phillips, Kansas for training in winter conditions. At the beginning of April 1944, the division reported to the Port of Embarkation at Camp Myles Standish, Massachusetts. 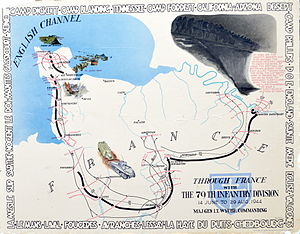 The division arrived in Liverpool on April 17 and began training in amphibious operations. After training in the United Kingdom from 17 April 1944, the 79th Infantry Division landed on Utah Beach, Normandy, 12–14 June and entered combat 19 June 1944, with an attack on the high ground west and northwest of Valognes and high ground south of Cherbourg. The division took Fort du Roule after a heavy engagement and entered Cherbourg, 25 June. It held a defensive line at the Ollonde River until 2 July 1944 and then returned to the offensive, taking La Haye du Puits in house-to-house fighting, 8 July. On 26 July, the 79th attacked across the Ay River, took Lessay, crossed the Sarthe River and entered Le Mans, 8 August, meeting only light resistance. The advance continued across the Seine, 19 August. Heavy German counterattacks were repelled, 22–27 August, and the division reached the Therain River, 31 August. Moving swiftly to the Franco-Belgian frontier near St. Amand (east of Lille), the division was then moved to XV Corps in eastern France, where it encountered heavy resistance in taking Charmes in street fighting, 12 September. The 79th cut across the Moselle and Meurthe Rivers, 13–23 September, cleared the Forêt de Parroy in a severe engagement, 28 September–9 October, and attacked to gain high ground east of Emberménil, 14–23 October, when it was relieved, 24 October.

After rest and training at Lunéville, the division returned to combat with an attack from the MignevineMontiguy area, 13 November 1944, which carried it across the Vezouse and Moder Rivers, 18 November–10 December, through Haguenau in spite of determined enemy resistance, and into the Siegfried Line, 17–20 December. The division held a defensive line along the Lauter River, at Wissembourg from 20 December 1944 until 2 January 1945, when it withdrew to Maginot Line defenses. The German attempt to establish a bridgehead west of the Rhine at Gambsheim resulted in furious fighting. The 79th beat off German attacks at Hatten and Rittershoffen in an 11-day battle before withdrawing to new defensive positions south of Haguenau on the Moder River, 19 January 1945. The division remained on the defensive along the Moder until 6 February 1945. During February and March 1945, the division mopped up German resistance, returned to offensive combat, 24 March 1945, crossed the Rhine, drove across the Rhine-Herne Canal, 7 April, secured the north bank of the Ruhr and took part in clearing the Ruhr Pocket until 13 April. The division then went on occupation duty, in the Dortmund, Sudetenland, and Bavarian areas successively, until its return to the United States and inactivation.

Throughout its 248 days of the World War II campaign, the division suffered 15,203 total casualties,[2] with 10,971 wounded and 14,875 non-battle injuries. Three soldiers from this division were awarded the Medal of Honor. The division took 35,466 prisoners of war.

The 79th Infantry Division is now the 79th Sustainment Support Command (SSC) headquartered at Joint Forces Training Base (JFTB) Los Alamitos, California. The 79th SSC was officially activated on December 1, 2009 with the mission of providing trained, ready, cohesive, well-led sustainment units for world-wide deployment to meet the U.S. Army’s rotational and contingency mission requirements in support of the National Military Strategy. The 79th SSC is the higher headquarters of over 20,000 U.S. Army Reserve sustainment soldiers organized into over 200 units dispersed throughout the western half of the United States. Major subordinate commands of the 79th SSC include the 4th Sustainment Command (Expeditionary) (ESC) in San Antonio, Texas, the 311th ESC in Los Angeles, California, the 364th ESC in Marysville, Washington, and the 451st ESC in Wichita, Kansas. As the operational command posts of a theater sustainment command – the ESCs plan, coordinate synchronize, monitor, and control operational- level sustainment operations for Army service component commands, joint task forces and joint forces commands throughout the world.

Four diagrammatic posters, printed by and marked "Fritz Busche Druckereiges M.B.H., Dortmund (Germany)" were made available to soldiers at the end of the war. No copyright information is given or implied. They depict the detailed movements, by date, with military battlefield symbols on stylized maps, of the 79th Infantry Division during its four campaigns during WWII. Each poster summarizes one battle campaign. The posters each measure 33.75 inch (85.7 cm) wide by 26.25 inch (66.7 cm) tall. They are signed in the lower-right corner by Henry D. White and Steve Kalihan(? unclear writing) or Steve Kaliber(? unclear writing), presumably the artists/authors of the posters.