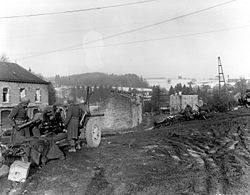 The 7th Armored Division ("Lucky Seventh"[1]) was an armored division of the United States Army that saw distinguished service on the Western Front, from August 1944 until May 1945, during World War II.

The division landed on Omaha and Utah Beaches, 13–14 August 1944, and was assigned to U.S. Third Army, commanded by General George S. Patton. The division drove through Nogent-le-Rotrou in an attack on Chartres. The city fell on 18 August. From Chartres, the Division advanced to liberate Dreux and then Melun, where they crossed the Seine River, 24 August. The division then pushed on to bypass Reims and liberate Château-Thierry and then Verdun, 31 August.

The 7th halted briefly for refueling and then on 6 September drove on toward the Moselle and made a crossing near Dornot. This crossing had to be withdrawn in the face of the heavy fortifications around Metz. The 7th then made attempts to cross the Moselle northwest of Metz but the deep river valley was not suitable terrain for an armored attack. Elements of the division assisted the 5th Infantry Division in expanding a bridgehead east of Arnaville, south of Metz, and on 15 September, the main part of the division crossed the Moselle there. The division was repulsed in its attacks across the Seille River at and near Sillegny, part of an attack in conjunction with the 5th Infantry division that was also repulsed further north.

On 25 September 1944, the 7th was transferred to U.S. Ninth Army and began the march to the Netherlands where they were needed to protect the right (east) flank of the corridor opened by Operation Market Garden. They were to operate in the southeast Netherlands, so that British and Canadian forces and the 104th Infantry Division could clear the Germans from the Scheldt Estuary in the southwest Netherlands and open the shipping lanes to the critical port of Antwerp, to allow Allied ships to bring supplies from Britain.

On 30 September, the 7th launched an attack from the north on the town of Overloon, against significant German defenses. The attacks progressed slowly and finally settled into a series of counter-attacks reminiscent of trench warfare of World War I. On 8 October, the division was relieved from the attack on Overloon by the British 11th Armoured Division and moved south of Overloon to the Deurne – Weert area. Here they were attached to the British Second Army, under Lieutenant-General Sir Miles C. Dempsey, and ordered to make demonstration attacks to the east, in order to divert enemy forces from the Overloon and Venlo areas, where British troops pressed the attack. This plan succeeded, and the British were finally able to liberate Overloon.

On 27 October 1944, the main part of the 7th was in essentially defensive positions along the line Nederweert (and south) to Meijel to Liesel, with the demonstration force still in the attack across the Deurne canal to the east. The Germans launched a two-division offensive centered on Meijel, catching the thinly stretched 87th Cavalry Reconnaissance Squadron of the 7th Armored Division by surprise. However, the response by the 7th Armored Division and by the British 8th Corps to which the division was attached stopped the German attack on the third day and then from 31 October to 8 November gradually drove the enemy out of the terrain that they had taken. During this operation, at midnight on the night of 31 October – 1 November Gen. Lindsay Silvester was relieved[2] as commanding general of the division and replaced by Gen. Robert Hasbrouck.

On 8 November 1944, the 7th was again transferred to the Ninth Army and moved south to rest areas at and east of Maastricht. Following an inflow of many replacements, they began extensive training and reorganization, since so many original men had been lost in France and the Netherlands that a significant part of the division was now men who had never trained together. At the end of November, the division straddled the Dutch-German border with one combat command in Germany (in the area of Ubach, north of Aachen) and two in the Netherlands.

Elements of the division were attached to the 84th Infantry Division for operations in early December in the area of Linnich, Germany, on the banks of the Rur(Roer). The 7th was preparing to drive into Germany when the Ardennes offensive began on 16 December 1944.

The division was transferred to U.S. First Army and ordered to St. Vith, Belgium, a critical road and rail center needed by the Germans to supply their offensive. Over the course of almost a week, the 7th (along with elements of the 106th, the 28th Infantry Division and 9th Armored Division) absorbed much of the weight of the German drive, throwing the German time table into great disarray, before being forced to withdraw west of the Salm River on 23 December. The division moved to the area of Manhay, Belgium, and by the end of December had cleared the town of the enemy. They were then relieved by the 75th Infantry Division. After a brief rest in January 1945, the division returned to positions near St. Vith, attacked, and re-captured the town on 23 January 1945.

In February 1945, now attached to the U.S. First Army's V Corps, the division returned to Germany. In the first week of the month, Combat Command R was attached to 78th Infantry Division for attacks on Strauch, Simmerath, Steckenborn, and other towns in the area of the Huertgen Forest. The Division remained in the area of Steckenborn, Germany throughout the month, waiting for the flood waters to recede after the Germans destroyed major dams in the Allies' path. However, large contingents of men were sent back into Belgium and attached to Engineer Combat Battalions (e.g. most of the men of 38 AIB were attached to 1110 Engrs at Stavelot) from 12 to 27 February, for use as laborers in using logs to build a solid base for the torn-up roads through the Ardennes Forest.

In March 1945, the 7th took part in two major breakthroughs with a two-week period during which they established and maintained an important defensive position. The first breakthrough came early in March when the division, as part of the III Corps, pushed east from the Rur river to establish a defensive position along the west bank of the Rhine, south of Bonn to Unkelbach. The second major breakthrough began 26 March when the division, still under III Corps control, took part in an armored offensive intended to break the thin crust ringing the Remagen bridgehead and overrun the rich German farmland to the east and north and surround the Ruhr Pocket in a double envelopment.

In April, the division completed their part of the encirclement of the Ruhr Pocket and captured the critical Edersee Dam. They then attacked into the Ruhr Pocket, in order to reduce it. On 16 April the LIII Panzer Corps surrendered to the division and the eastern sector of the pocket collapsed. The division, after a brief rest, were then transferred once again to the British Second Army and moved north to the Baltic Sea. From this area, Lieutenant William A. Knowlton led a force eastward to make contact with the Russians. The division remained in this area until the war in Europe ended.

The division was then moved into the future Soviet zone of occupation, at Dessau, Germany. President Truman wanted one of his armored divisions parading in front of him on the 4 July in Berlin, and 2nd and 7th Armored were both prepared for the honor. When the 2nd Armored was chosen for the parade, 7th Armored immediately moved southwest to the future American zone of occupation.

The division then began to be gradually filled with more and more new faces, as the veterans were transferred elsewhere. The first large contingent of veterans left in mid July: these were low-point men who were headed back to the United States to begin training for the invasion of Japan. Other large groups of high-point men were transferred to other units that were going back home before the 7th Armored was inactivated.

The division returned to New York and was inactivated on 11 October 1945.

During its service during World War II, the division captured and destroyed a disproportionate number of enemy vehicles and took more than 100,000 prisoners.[3]

The division was reactivated in the early 1950s, but not sent to Korea. It was stationed at Camp Roberts, California for the duration of the conflict.[4]