The 7th Guards Airborne-Assault (Mountain) Division is an elite guards division of the Russian Airborne Troops. Its soldiers fought in Eastern Europe in World War II, after which they were based in Kaunas, Lithuania. During the Cold War period, the division served in the suppression of the Hungarian and Czech revolutions. Recently, it has also taken part in various counter-insurgency operations in the Caucasus region.

It has been based in Novorossisk, Russia, since 1993.

There were two separately formed 7th Guards Airborne Divisions in the Red Army and Soviet Ground Forces/Soviet Airborne Troops. The first division was formed during the Second World War at Ramenskoye in December 1942.[1] It fought at Demyansk, Voronezh, Korsun, on the Dnieper River, and at Targul Frumos and Budapest. It ended the war with 4th Guards Army of the 3rd Ukrainian Front in May 1945. As part of a postwar military reorganization, this division was retitled the 115th Guards Rifle Division in June 1945. The second formation of the 7th Guards Airborne Division was accomplished in October 1948.

The first formation of the division was formed during the Second World War at Ramenskoye in December 1942. It fought at Demyansk, Voronezh, Korsun, on the Dnieper River, and at Targul Frumos and Budapest.

On May 8, 1945, the divisional commander, Major General Dmitrii Aristarkhovich Drichkin,[2] set up his headquarters in the village of Erlauf, Austria, some 60 miles west of Vienna and 50 miles east of Linz. Anxious to meet the Allies, he sent out scouts. At midnight, he met Major General Stanley Eric Reinhart, commander of the U.S. 65th Infantry Division.[3] For the duration of their presence on the Danube river, both commanders continued to cooperate in an unusually effective manner.[4]

Twenty years later, public affairs officer Captain John J. Pullen described their first cordial encounter for the National Observer. For the 50th anniversary, Erlauf erected a Soviet-sponsored memorial. It features a local girl, linking arms with a GI on her right, and a Soviet soldier on her left. To this day, an enlarged photo and a small exhibit mark the spot where this historic encounter took place: A life-size Major General Reinhart, smiling at General Drichkin, as they compare their watches one minute past midnight, on 9 May 1945, the moment the unconditional surrender of Germany became effective.

The baptism of fire of the second formation division's predecessor regiment took place in 1945, fighting around Lake Balaton (Hungary) under the 37th Guards Rifle Corps, 9th Guards Army, 3rd Ukrainian Front. On 26 April 1945, the 322nd Guards Rifle Regiment of the 103rd Guards Rifle Division was awarded the Order of Kutuzov, second class, for exemplary performance. In commemoration, the division's official day is 26 April, by an order of the Defense Minister of the USSR.

At the end of the war, the 322nd Guards Rifle Regiment was in the city of Trebon, Czechoslovakia.[7] During the war, the regiment was thanked on six occasions by the Stalin, the Supreme Commander. In all 2,065 of its soldiers, sergeants and officers were decorated for valor and heroism by the Soviet Union.

The 7th Guards Airborne Division (second formation) was established on 15 October 1948 on the basis of the 322nd Regiment,[8] 103rd Guards Airborne Division at Polotsk in the Belorussian Military District, being relocated to the cities of Kaunas and Marijampole, Lithuanian SSR. Personnel from these bases took part in actions against anti-Soviet Lithuanian nationalists.

Units in this premier division of airborne troops have mastered the landing of Antonov An-8, An-12, An-22, and Il-76 aircraft, tested a number of new parachute systems (D-5 and D-6), all generations of BMD, and 2S9 Nona artillery systems.

In 1956, the division was involved in "Operation Whirlwind", the suppression of the Hungarian revolution. On 3 November 1956, the 108th Parachute Regiment of airborne troops landed at the Tököl airbase in Il-12 and Li-2planes, capturing and disabling six antiaircraft batteries, then taking up the defense of the facility. On 4 November 1956 the regimental staff, together with fighters from the 119th Parachute Regiment, entered the city of Budapest and took part in street fighting until the city was secured on 7 November.

In 1968, the division participated in Operation Danube to suppress the Prague Spring uprising. The 108th Regiment distinguished itself in the most dangerous and difficult missions, for which about two hundred of its personnel received high government awards.[citation needed] 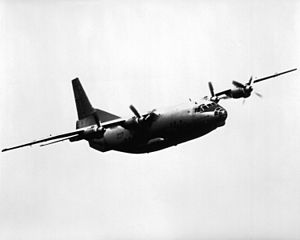 The An-12 Soviet military-transport plane

On 23 June 1968, troops of the 108th Airborne Regiment were tasked to fly from Kaunas to Ryazan, where they were to demonstrate their vehicle assault landing skills to the Minister of Defence of the USSR, Andrei Grechko. The group of three An-12 aircraft took off early in the morning, reaching a cruising altitude of 4,000 metres (13,000 ft). Approaching the city of Kaluga, a plane carrying the staff of a company and battalion command (91 officers and men) collided with an Ilyushin Il-14 passenger plane that was at 4000 meters without clearance, with the loss of all aboard.

The division was involved in many major exercises and maneuvers, such as "Shield-76", "Neman", "West-81" (Exercise Zapad-81), "West-84" and "Watch-86", in the latter three exercises dropping airborne combat vehicles with crews, and receiving the Minister of Defence of the USSR Pennant "for courage and military prowess" during West-81.

In 1988–1989, elements of the division took part in the Black January events in Baku. In 1993–1996, personnel from the 108th Regiment served on peace-making missions in Abkhazia.

At some point after 1990 the division was given the 'Mountain' designation.

Between January 1995 and April 2004, the 108th Regiment fought in the North Caucasian region, notably in the August 1999 battle for the "Donkey's Ear" heights in Dagestan.

On 6 October 2015 it was reported that the 7th Guards Airborne Division was deployed to Syria in support of Spetsnaz units in the Russian military intervention in the Syrian Civil War.[9] 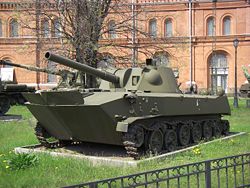 The regiment's equipment includes the BMD-1, BMD-2 and BTR-D vehicles, with the anti-aircraft BTR-ZD and anti-tank BTR-RD "Robot" variants of the BTR-D. The BTR-RD was equipped with the 9М111 "Bassoon" anti-tank rocket systems (capable of firing twelve 9М111 "Bassoon" or 9М113 "Competition" anti-tank guided missiles at a time). Artillery vehicles include the 2S9 "Nona" 120 mm self-propelled artillery vehicle and the 1В119 reconnaissance and fire-control vehicle.