The 7th Ukrainian Verkhovna Rada (Ukrainian: Верховна Рада України VII скликання) is the previous session of the legislative branch of the Verkhovna Rada, Ukraine's parliament. Its composition was based on the results of the 2012 parliamentary election. Half of the seats in the parliament were apportioned between the five winning parties based on the popular vote, while the other half was apportioned between 4 parties and 44 independents between 225 constituencies throughout the country. It first met in the capital Kiev on December 12, 2012 and ended its session on November 27, 2014 after the 8th Verkhovna Rada began its first session.

Parliamentary work was virtually paralyzed the first months of 2013 because the "opposition" (UDAR, Fatherland, Freedom, others) blocked the podium and presidium seats on various days.[1] According to a study conducted by Opora, parliamentary deputies did not work for 53 days during the first hundred days in the 7th convocation.[2] 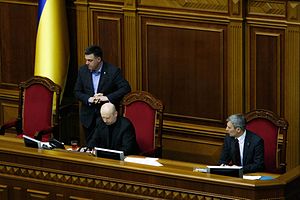 The parliament's chairman, first deputy, and deputy are all unaffiliated people's deputies according to parliamentary procedure.

On 18 March 2013, the Central Election Commission of Ukraine registered Roman Stadniychuk of Batkivschyna and Oleksandr Kozub of Party of Regions as people's deputies in place of Andrey Verevskiy and Serhiy Vlasenko.[40]

In June 2013 people's deputies of Batkivschyna claimed they had been offered bribes of $2 million to $6 million for leaving the parties parliamentary faction, becoming member of the Party of Regions faction or for voting for legislation proposed by it.[41] 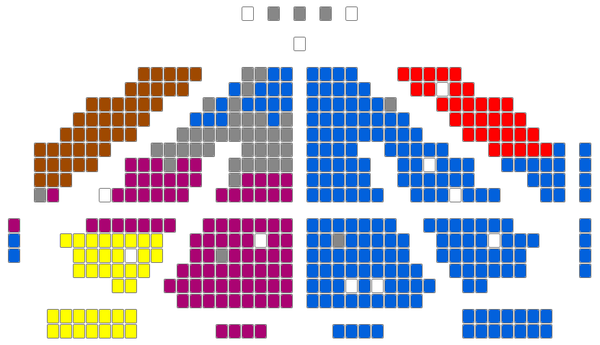 Location of parliamentary factions in the 7th Verkhovna Rada on July 1, 2014: