The 80th Training Command (Total Army School System) is a formation of the United States Army Reserve. During World War I and World War II, the unit was designated the 80th Infantry Division. Nicknamed the "Blue Ridge Division", it was initially composed of draftees from the mid-atlantic states of Virginia, West Virginia, Pennsylvania and Maryland.

From 1946 to 1952, the 80th Division was redesignated the 80th Airborne Division. In May 1952, it was designated reserve infantry division and a reserve training division in March 1959. In 1994, the division was granted the designation, 80th Division (Institutional Training). On 1 October 2008 the Division underwent a major transformation and is now the 80th Training Command.

Because of significant common heritage in the past (Indian War, Revolutionary War and Civil War), residents of Pennsylvania, Virginia and West Virginia became the structure of the 80th Division. The 80th Division was organized in August 1917 at Camp Lee, Virginia. The units were made up mostly of men from the above three states.

Serving with the division were the 314th Machine Gun Battalion, men from the Tidewater area, as well as the 305th Engineers, men from an area east and north of Pittsburgh; the 305th Trains (Ammunition, Motor Supply and Sanitary) were men from Western PA, West Virginia and VA. The engineers were more often than not sent out ahead. During the rest period from 14 October through the Armistice, they finally were outfitted with U.S. Springfield and Browning automatic rifles. They had two weeks to train before the third and final push began in the Meuse Argonne. It was also during this period that an attack formation was reorganized to allow for more maneuverability.

The 155th Field Artillery Regiment was in combat from the start of the Meuse Argonne, continuously with the 80th Division, but served also with the 90th Division into Germany, until after the Armistice. Altogether, the 155th served with five different divisions.

During the Meuse Argonne campaign, the 80th Division was the only one that saw action during each phase of the offensive (three times). And they first earned their motto, "The 80th Division Moves only Forward!". The artillery of the division boasted more days of continuous combat firing than the batteries of any other American division. The 80th captured two Germans and one machine gun for every man wounded and one piece of artillery with gun crew for every 10 men wounded. Men of the 80th Division received 619 awards and decorations.[3][citation needed]

"Previously announced, the distinctive symbols of the various units of the Division were declared official on April 30th 1918. For the four Infantry Regiments, in their order beginning with the 317th Infantry, they were a diamond, square, circle, and semi circle. The symbol of each unit's Headquarters Company was colored red, white and blue; that of the Supply Company red and white; that of the Machine Gun Company red and blue. The battalion symbols were colored in red (Coys, A, B, C, D), white (Coys, E, F, G, H), blue (Coys, I, K, L, M) in numerical order. The three Machine Gun battalions were identified with a shield - blue and white (313th), red and white (314th), red and blue (315th), in order, beginning with the 313th M.G.Bn. Other Units of the Command were assigned equally distinctive symbols, thereby enabling property and individuals immediately identified by the markings required on the packing cases, wagons, helmets and other property articles".

All artillery units wear the "Gun Sight" on their helmets. It referenced the 313th F.A. and 314th F.A. with two blocks at approximately 45 degrees and 270 degrees. The 315th F.A. was 155mm and their "Gun Sight" emblem was a variation of this emblem. It contained the infantry colors (blue) in the four quadrants. In the center, there was a star and the battery letter was in the center of the star. The engineer units were identified by spades on their helmets. White and red for the headquarters company, red for the 1st Battalion (Companies A,B,C), white for the 2nd Battalion (Companies D, E, F).[4]

On 5 August 1944, the 80th landed at Utah Beach. The division was destined to become the "work horse" of General Patton's 3rd Army and to play a key role in the famed 3rd Army breakthrough at Avranches. The Division then attacked Argentan, taking it, 20 August, and creating the Falaise Pocket. After mopping up in the area, the 80th took part in the Third Army dash across France, cutting through Saint-Mihiel, Châlons, and Commercy in pursuit of the retreating Germans until stopped by the lack of gasoline and other supplies at the river Seille.

From 25 September to 7 November, the division maintained an aggressive defense of positions west of the Seille, and prepared for the Third Army sweep into the industrially vital Saar Basin. The attack jumped off on 8 November, the 80th advancing through Delme Ridge, Faulquemont, and St. Avold to within 5 miles (8.0 km) of Saarbrücken, when it was relieved by the 6th Armored Division, 7 December 1944.

After 10 days rest, the division returned to combat, moving southeast to take part in an attack on the Siegfried Line at Zweibrücken when the Germans launched their winter offensive in the Ardennes.[5] The 80th was moved northward to Luxembourg and was hurled against the German salient, fighting at Luxembourg and Bastogne. By Christmas Day, men of the 80th were side-by-side with the tanks of the 4th Armored Division, battering forward through murderous opposition to help the 101st Airborne Division, besieged in Bastogne. Over frozen, snow-covered terrain, the attack gained nine bitter miles despite constant machine gun and mortar fire. The next day, the gap between the rescuers and the besieged was narrowed to 4000 yards. On 28 December, the 80th broke through, bringing relief to the 101st before driving the enemy across the Sure to Dahl and Goesdorf, 7 January 1945, and across the Clerf and Wiltz Rivers by 23 January. On 7 February 1945, the division stormed across the Our and Sauer Rivers at Wallendorf, broke through the Siegfried Line, pursued the fleeing enemy to Kaiserslautern, 20 March, and crossed the Rhine, 27–28 March, near Mainz.

Pursuit continued in April, the division defeating the German defenders at Kassel, driving rapidly to Erfurt on the 12th, and Weimar, Jena, and Gera on the 14th. Relieved, 21 April, it moved to Nürnberg for occupation duty and on 28 April, to Regensburg, then to the Enns River, battling to the very end. It has been alleged that the last shot fired on the western front was in Czechoslovakia by the 80th, the last of General Patton's divisions still in action. General Patton issued his cease-fire order at 0800 on 8 May 1945. By V-E day, the 80th Division had amassed 289 days of combat and had captured more than 200,000 enemy soldiers. 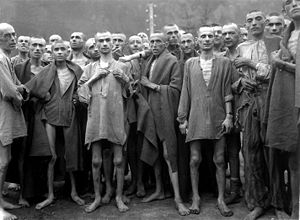 Prisoners of Ebensee, one of the sub-camps of Mauthausen-Gusen, upon liberation by 80th Division

Assignments in European Theatre of Operations

The division was inactivated in January 1946, but reactivated in December of that year as the 80th Airborne Division. Since then, the division has been reorganized several times. As an airborne division, it became one of 24 organized Reserve Corps divisions. In 1952, it was reorganized as the 80th Infantry Division and remained as such for seven years. In March 1959, it was reorganized as the 80th Division (Training), with a primary focus of providing initial entry training to trainees at Fort Bragg, North Carolina, and Fort Jackson, South Carolina, a mission and structure that lasted for many years. In 1988 and 1990, the division carried out ten-week exercises for wartime mobilization missions named, "Old Dominion Forward" at Fort Bragg, setting up training for nearly 700 new Soldiers.[6]

Units from the 80th Division were activated in support of Operations Desert Shield and Desert Storm. Two 80th Division units were called to active duty in support of Operation Desert Shield/Storm. The 424th Transportation Company of Galax, Virginia, was activated 17 November 1990. After training and equipping at Fort Eustis, Virginia, it deployed to Saudi Arabia 5 January 1991. For its service in the war the company was awarded a Meritorious Unit Commendation. Citation reading: "... under adverse conditions in a combat zone, logging over 850,000 accident- free road miles, in the countries of Saudi Arabia, Kuwait and Iraq." By the end of the war, elements of the 424th had advanced as far as the Euphrates River in support of coalition assault units. The 424th returned to the United States on 29–30 June 1991, and to home station 3 July. Soldiers of the 3rd Battalion, 318th Regiment, 4th Brigade, at Fort Story, Virginia, were activated 23 January 1991, and reported to Fort Eustis to train recalled reservists. Because of the short duration of the ground war in Iraq and Kuwait, additional Individual Ready Reserve troops were not called up and the 3rd Battalion was released from active duty and returned to home station 17 March.

In 1992, the division began a training base expansion mission at Fort Benning, Georgia. The mission changed to professional roundout training at Fort Jackson, South Carolina, the following year when Reservists worked with active duty Army drill sergeants in training new soldiers. October 1994 marked the fourth major reorganization since World War II, when it became Headquarters, 80th Division (Training). Maintaining the Initial Entry mission, it expanded to provide "The Army School System" or TASS mission. The 80th took command and control of 10 Army Reserve Forces schools, and along with legacy divisions from World War II (84th, 95th, 98th, 100th, 104th, and the 108th) became one of seven institutional training (IT) divisions, located in seven regions throughout the U.S. The 80th Division (IT) provided instructions for units in Region B which included Virginia, West Virginia, Pennsylvania, Maryland, the District of Columbia, and Delaware. Seven brigades of the 80th Division (IT) carried out specific training missions in the above states and proceeded to Fort Leonard Wood, Missouri, to support expansion of the U.S. Army Training Center and to conduct Basic Combat Training (BCT), One Station Unit Training (OSUT) and other specialized training, as directed by Training and Doctrine Command (TRADOC).

So far 80th Division soldiers have earned more than 1,144 medals and citations including 31 Purple Hearts, 2 Bronze Stars with Combat V, 467 Bronze Stars, 84 Combat Infantryman Badges (CIB) and 187 Combat Action Badges (CAB). The unit continues to support the Global War on Terrorism with individual and group deployments to the theater of operations as required.

On 1 October 2008, the 80th Division (IT) transformed to become the 80th Training Command (TASS). It expanded from the five states to reach across the entire country. Of the seven IT divisions, only three remain, with the 80th taking command of the entire TASS mission for the Army Reserve. The 80th expanded from eight brigades and 12 battalions to three divisions (94th, 100th, 102nd), 13 brigades, 63 battalions, and 14 training centers. The 80th is the third-largest command organization in the U.S. Army Reserve. Made up of over 7,300 Army Reserve Soldiers assigned to 15 brigade units aligned under three major subordinate one-star commands with units located nationwide—from Pennsylvania to Puerto Rico and from the Carolinas and Georgia to California. It has an operational control training relationship with a unit in Hawaii and a support relationship with a unit in Germany.