The 87th Infantry Division ("Golden Acorn"[1]) was a unit of the United States Army in World War I and World War II. 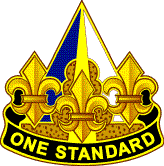 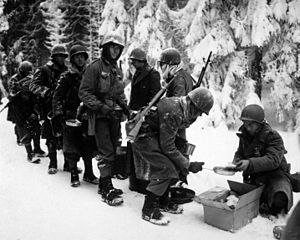 Chow is served to American infantrymen of the 347th Infantry Regiment on their way to La Roche, Belgium, 13 January 1945. 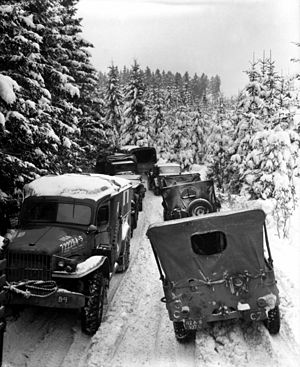 Vehicles of the U.S. 87th Infantry Division in the woods near Wallerode/St. Vith, Belgium, on 30 January 1945.

The 87th Infantry Division arrived in Scotland, 22 October 1944, and trained in England, 23 October-30 November. It landed in France, 1–3 December, and moved to Metz, where, on 8 December, it went into action against and took Fort Driant. The division then shifted to the vicinity of Gross Rederching near the Saar-German border on 10 December and captured Rimling, Obergailbach, and Guiderkirch.

The 87th was moving into Germany when, on 16 December 1944, German Field Marshal Von Rundstedt launched his offensive in the Ardennes forest (The Battle of the Bulge). The Division was placed in SHAEF reserve, 24–28 December, then thrown into the Bulge battle in Belgium, 29 December. In a fluctuating battle, it captured Moircy on 30 December and Remagne on 31 December. On 2 January 1945, it took Gérimont, on 10 January Tillet, and reached the Ourthe by the 13 January. On 15 January 1945, the division moved to Luxembourg to relieve the 4th Division along the Sauer and seized Wasserbillig on 23 January. The 87th moved to the vicinity of St. Vith, 28 January, and attacked and captured Schlierbach, Selz, and Hogden by the end of the month. After the fall of Neuendorf, 9 February, the division went on the defensive until the 26 February, when Ormont and Hallschlag were taken in night attacks. The 87th crossed the Kyll River, 6 March, took Dollendorf on 8 March, and after a brief rest, returned to combat, 13 March 1945, crossing the Moselle on 16th and clearing Koblenz, 18–19 March. The division crossed the Rhine, 25–26 March, despite strong opposition, consolidated its bridgehead, and secured Grossenlinden and Langgöns. On 7 April, it jumped off in an attack which carried it through Thuringia into Saxony. Plauen fell, 17 April, and the division took up defensive positions, 20 April, about 4 miles from the Czech border. On 6 May 1945, it took Falkenstein and maintained its positions until VE-day.

The 87th Division returned to the States in July 1945 expecting to be called upon to play a role in the defeat of the Japanese, but the sudden termination of the war in the Pacific while the division was reassembling at Fort Benning changed the future of the 87th. The division was inactivated 21 September 1945.

The last active soldier from the division retired in June 1981. Colonel Vedder B. Driscoll, who had enlisted in 1943 into Company "I", 345th Infantry, retired after 30 years of commissioned service.

The 87th Infantry Division was reformed in the Organized Reserve Corps after the war, in the Third Army area. It comprised units in Alabama, Tennessee, Mississippi, and Florida. It was inactivated in 1954 then in 1957, reactivated as the 87th Maneuver Area Command (MAC) located in Birmingham, Alabama. In the fall of 1993, the 87th MAC was designated the 87th Division (Exercise) in the fall of 1999, reorganized and designated 87th Division (Training Support). The 87th still serves today as the 87th Army Reserve Support Command with 16 subordinated battalions under it. [2]