The 88th Infantry Division was an infantry division of the United States Army that saw service in both World War I and World War II. It was the first Army of the United States division to be created "from scratch" after the implementation of the draft in 1940. Previous divisions were either Regular Army, Reserve or National Guard. Much of the experience in creating it was used in the subsequent expansion of the U.S. Army.

By the end of World War II the 88th Infantry fought its way to the northernmost extreme of Italy. In early May 1945 troops of its 349th Infantry Regiment joined the 103d Infantry Division of the VI Corps of the U.S. Seventh Army, part of the 6th Army Group, which had raced south through Bavaria into Innsbruck, Austria, in Vipiteno in the Italian Alps.[1]

The 88th Infantry Division was one of the first all draftee divisions to enter the war. Formed at Camp Gruber, Oklahoma, the division arrived at Casablanca, French Morocco, 15 December 1943, and moved to Magenta, Algeria, on the 28th for intensive training. Destined to spend the war fighting on the Italian Front, the 88th Division arrived at Naples, Italy, 6 February 1944, and concentrated around Piedimonte d'Alife for combat training. An advance element went into the line before Cassino, 27 February, and the entire unit relieved British elements along the Garigliano River in the Minturno area, 5 March. A period of defensive patrols and training followed.

On 11 May, the 88th drove north to take Spigno, Mount Civita, Itri, Fondi, and Roccagorga, reached Anzio, 29 May, and pursued the enemy into Rome, being the first unit of the U.S. Fifth Army, of which the 88th formed a part, into the city on 4 June, after a stiff engagement on the outskirts of the city. An element of the 88th is credited with being first to enter the Eternal City. After continuing across the Tiber to Bassanelio the 88th retired for rest and training, 11 June. The Division went into defensive positions near Pomerance, 5 July, and launched an attack toward Volterra on the 8th, taking the town the next day. Laiatico fell on the 11th, Villamagna on the 13th, and the Arno River was crossed on the 20th although the enemy resisted bitterly.

After a period of rest and training, the Division opened its assault on the Gothic Line, 21 September 1944, and advanced rapidly along the Firenzuola-Imola road, taking Mount Battaglia (Casola Valsenio, RA) on the 28th. The enemy counterattacked savagely and heavy fighting continued on the line toward the Po Valley. The strategic positions of Mount Grande and Farnetto were taken, 20 and 22 October. From 26 October 1944 to 12 January 1945, the 88th entered a period of defensive patrolling in the Mount Grande-Mount Cerrere sector and the Mount Fano area. From 24 January to 2 March 1945, the Division defended the Loiano-Livergnano area and after a brief rest returned to the front. The drive to the Po Valley began on 15 April. Monterumici fell on the 17th after an intense barrage and the Po River was crossed, 24 April, as the 88th pursued the enemy toward the Alps. The cities of Verona and Vicenza were captured on the 25th and 28th and the Brenta River was crossed, 30 April. The 88th was driving through the Dolomite Alps toward Innsbruck, Austria where it linked up with the 103rd Infantry Division, when the hostilities ended on 2 May 1945.ref name=Alps/>

The unit was in combat for 344 days and sustained 15,173 casualties (killed, wounded or missing). 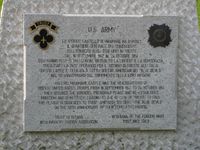 Units associated, assigned or attached to the division during World War II included:

After the war, the 88th Infantry Division absorbed some personnel and units from the 34th Infantry Division and served on occupation duty in Italy guarding the Morgan Line from positions in Italy and Trieste until 15 September 1947 when the Italian peace treaty came into force. The 351st Infantry was relieved from assignment to the division on 1 May 1947 and served as temporary military Government of the Free Territory of Trieste, securing the new independent State[2] between Italy and Yugoslavia on behalf of the United Nations Security Council.[3] Designated TRUST (Trieste United States Troops), the command served as the front line in the Cold War from 1947 to 1954, including confrontations with Yugoslavian forces.
In October 1954 the mission ended upon the signing of the Memorandum of Understanding of London [4] establishing a temporary civil administration in the Anglo-American Zone of the Free Territory of Trieste, entrusted to the responsibility of the Italian Government.[5]
TRUST units, which included a number of 88th divisional support units, all bore a unit patch which was the coat of arms of the Free Territory of Trieste superimposed over the divisional quatrefoil, over which was a blue scroll containing the designation "TRUST" in white. 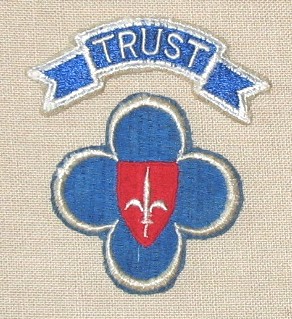 The division shoulder patch is worn by the United States Army Reserve 88th Regional Readiness Command; however, the division lineage is not perpetuated by the 88th RRC.[citation needed] According to the United States Army Center of Military History, RRCs such as the 88th have the same number as inactivated divisions and are allowed to wear the shoulder patch, but division lineage and honors are not inherited by an RRC, which is not considered as a successor to a division.