The 89th Infantry Division, known as the "Rolling W," was an infantry unit of the United States Army that was activated for service in World War I and World War II. 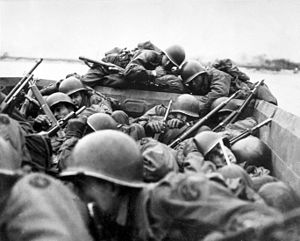 Soldiers from the Division cross the Rhine River in assault boats, 1945.

The 89th Infantry Division landed in France at Le Havre, 21 January 1945, and engaged in several weeks of precombat training before moving up to the Sauer River into jump-off positions east of Echternach, 11 March 1945. The next day, the offensive began, and the 89th plunged across the Sauer in a rapid advance to and across the Moselle, 17 March. The offensive rolled on, and the division assaulted across the Rhine River on 26 March 1945 under intense fire in the Wellmich-Oberwesel region. A pontoon bridge was built across the Rhine from St. Goar to St. Goarshausen. In April, the 89th attacked toward Eisenach, taking that town on 6 April. The next objective, Friedrichroda, was secured by 8 April. On 4 April 1945, the 89th overran Ohrdruf, a subcamp of the Buchenwald concentration camp.

The division continued to move eastward toward the Mulde River, capturing Zwickau by 17 April. The advance was halted, 23 April, and from then until VE-day, the division saw only limited action, engaging in patrolling and general security. Three towns, Lossnitz, Aue, and Stollberg, were kept under constant pressure, but no attacks were launched. The 89th Infantry's casualties consisted of 292 men killed in action, 692 men wounded in action, and 33 men died of wounds.

The 89th was reactivated as a Reserve unit in 1947 with headquarters in Wichita, Kansas and redesignated as the 89th Division (Training) in 1959. In 1973 the division colors were cased and the shoulder patch (but not the lineage and honors) was continued in use as the 89th Army Reserve Command (ARCOM). (ARCOMs were not tactical commands, but were instead regional conglomerations of unrelated units. Upon mobilization, units within the ARCOMs would be assigned to active duty units with which they were aligned.) The 89th ARCOM was later redesignated as the 89th Regional Support Command, and in 2003 it became the 89th Regional Readiness Command. In its 2005 BRAC recommendations, United States Department of Defense recommended realigning the Wichita US Army Reserve Center by disestablishing the 89th Regional Readiness Command. This recommendation was part of a larger recommendation to re-engineer and streamline the command and control structure of the Army Reserves that would create the Northwest Regional Readiness Command at Fort McCoy, Wisconsin.[1] The 89th currently exists as the 89th Sustainment Brigade in the US Army Reserve.