The 8th SS Cavalry Division Florian Geyer was a Waffen-SS cavalry Division during World War II. It was formed in 1942 from a cadre of the SS Cavalry Brigade which was involved in anti partisan operations behind the front line and was responsible for the extermination of tens of thousands of the civilian population.[1] It continued with the so-called pacification operations in the occupied Soviet Union, leading to further atrocities.

About 40% of the division were Danube Swabian from Siebenbürgen (Transylvania) and Banat (Serbia). The Training and Replacement Battalion of the 8th SS Cavalry Division was involved in suppressing the 1943 Warsaw Ghetto Uprising.

In March 1944, it was named after Florian Geyer (1490–1525), the Franconian nobleman who led the Black Company during the German Peasants' War. Veterans from the division formed the core of the 22nd SS Volunteer Cavalry Division Maria Theresia, following the latter's creation on 29 April 1944.

The Division was destroyed during the fighting in the Siege of Budapest in early 1945. 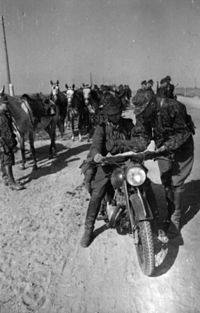 The newly created division was soon sent back to the Eastern Front and was stationed in the Rzhev and Orel sectors in central Russia until the spring of 1943. As the Ninth Army planned the evacuation from the Rzhev salient in Operation Buffalo (Büffel) in March 1943, the division took part in large-scale pacification sweeps in the weeks before the operation, alongside elements of four Wehrmacht divisions and other SS and police units. An estimated 3,000 Russians were killed, the great majority of whom were unarmed: only 277 rifles, 41 pistols, 61 machine guns and 17 mortars were recovered. As part of the withdrawal, Ninth Army's commander Walter Model personally ordered the deportation of all male civilians, wells poisoned, and at least two dozen villages razed in a scorched earth policy to hinder the Red Army's follow up in the area.[2]

The division was then sent to Hungary in October 1943, where the Panzerjager and Sturmgeschütz Battalions were combined and the Reconnaissance Battalion became a Panzer Reconnaissance Battalion. Following this reorganization the division was posted to Croatia but many new recruits were Shwoveh[clarification needed] Danube Swabians drawn form Hungary in March 1944. In April 1944, they returned to Hungary and took part in the fighting in Transylvania after the Romanian front collapsed.[3]

The Division was trapped in the Siege of Budapest with the IX SS Mountain Corps when the Soviet and Romanian forces surrounded the city in December 1944. The Division was destroyed in the fighting for Budapest and by the end of the siege of the 30,000 men of the SS Corps only about 800 survived to reach the German lines.[3] 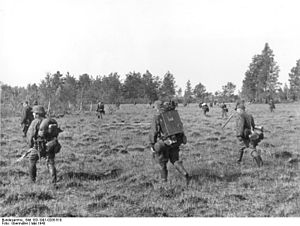 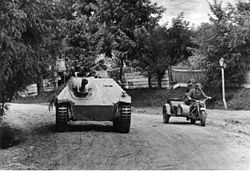