The 92nd Infantry Division was a unit of the United States Army in World War I and World War II. Organized in October 1917 at Camp Funston, Kansas, the unit was formed with African American soldiers from all states. Before leaving for France in 1918, the buffalo was selected as the divisional insignia due to the "Buffalo Soldiers" nickname, given to African American cavalrymen by Native Americans in the 19th century. The "Buffalo Soldiers Division" divisional nickname was inherited from the 367th Infantry, one of the first units of the division organized. This segregated unit was the only African American infantry division to see combat in Europe during World War II, as part of the 5th Army.[1] It served in the Italian Campaign from 1944 to the war's end.

For an account of the fighting of the Buffalo Division in the Woevre Plain offensive see the article on William M Cain at Kaiserscross.com.

As would be the case with the 93rd Infantry Division, parts of the 92nd would serve under and alongside the French Army after both the main American Expeditionary Force (AEF) and the British Army refused to have African-American soldiers serve in combat under them.

The 92nd was a National Army unit formed from black draftees, with a cadre of 154 NCOs transferred from the four Regular Army regiments, mostly led by inexperienced black junior officers fresh out of training and commanded by indifferent white officers. They were a green and untried unit that was not allowed to maneuver as a division before they were committed to the line. After arrival in France, the 92nd like all AEF units, trained for deployment in the trenches. They began to be fed into the French sector front lines by company in mid-August 1918. The 92nd Artillery Brigade only came online in October 1918.

Unlike the 93rd, the 92nd would ultimately fight as a whole under American command. The division saw combat in the Meuse-Argonne Offensive during November 1918. Their indifferent showing was more due to brittle morale and poor handling by their white superiors than any real failings. 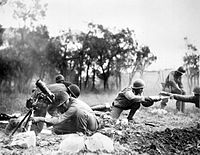 Soldiers of the 92nd Infantry Division operate a mortar, Massa, Italy in November 1944. 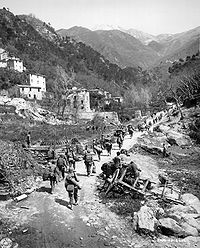 Soldiers of the 92nd Infantry Division pursue the retreating Germans through the Po Valley, Italy, end of April-1945.

The division was reactivated as an infantry division on 15 October 1942 at Fort Huachuca, Arizona. After two years of training, the 370th Infantry Regiment would be sent overseas in August 1944 and temporarily attached to the 1st Armored Division. The rest of the division would be sent overseas in September of that year, and the division as a whole would see heavy combat during the remainder of the Italian Campaign. Between August 1944 and May 1945 the 92nd Division suffered 3,200 casualties, and the factoring in of losses from the 442nd Regimental Combat Team (442nd RCT) and other units attached to the division brings the total up to 5,000 casualties.[4]

During the division's participation in the Italian Front, the Buffalo Soldiers made contact with units of many nationalities: beyond the attached 442nd RCT, they also had contact with the segregated troops of the British and French colonial empires (Black Africans, Moroccans, Algerians, Indians, Gurkhas, Arab and Jewish Palestinians) as well as with exiled Poles, Greeks and Czechs, anti-fascist Italians and the nonsegregated troops of the Brazilian Expeditionary Force.[5][6][7]

The division's magazine was The Buffalo.[8] Its art director, Ted Shearer, would go on to create the early African-American comic strip Quncy.[9]

The division's commander, Maj. Gen. Edward M. Almond, was for a time highly regarded by George Marshall, who was a fellow Virginia Military Institute (VMI) graduate, and was Army Chief of Staff during World War II. This was a major factor in Almond's promotion to major general and subsequent command of the division, a position he held from its formation in October 1942 until August 1945. He led the division in combat throughout the Italian Campaign of 1944–1945. Almond was chosen by Marshall to command the division because Marshall believed Almond would excel at what was seen as a difficult assignment. However, Almond performed poorly and went on to blame his poor performance on the fact that the division was made up of largely African American troops. He saw his troops as the source of his failure in combat, and went on to advise the Army against ever again using African Americans as combat troops.[10]

According to Colonel Howard Donovan Queen: "...Whatever shortcomings the 92nd had, it rested entirely on the shoulders of Major General Almond. His entire staff was incompetent, excepting for Brigadier General (William H.) Coburn, the artillery commander, whose artillery was rated among the best on the front."[11]

The 370th Regimental Combat Team, attached to the 1st Armored Division, arrived in Naples, Italy, 1 August 1944 and entered combat on 24th. It participated in the crossing of the Arno River, the occupation of Lucca and the penetration of the Gothic Line. Enemy resistance was negligible in its area. As Task Force 92, elements of the 92nd attacked on the Ligurian coastal flank toward Massa, 5 October. By the 12th, the slight gains achieved were lost to counterattacks. On 13 October, the remainder of the Division concentrated for patrol activities. Elements of the 92nd moved to the Serchio sector, 3 November 1944, and advanced in the Serchio River Valley against light resistance, but the attempt to capture Castelnuovo di Garfagnana did not succeed. Patrol activities continued until 26 December when the enemy attacked, forcing units of the 92nd to withdraw. The attack ended on 28 December. The attacking forces were mainly from the Republic of Salò's Fascist Army, the 4th "Monte Rosa" Alpine Division (four battalions), with the support of three German battalions. Aside from patrols and reconnaissance, units of the 92nd attacked enemy forces in the Serchio sector from 5–8 February 1945, advancing against the 1st "Italia" Bersaglieri Division, but enemy counterattacks nullified all Division advances.

On 1 April, the 370th RCT and the attached 442nd RCT (Nisei) attacked the Ligurian coastal sector and drove rapidly north against light opposition from the German 148th Infantry Division, which was supported only by Italian coastal units. The 370th took over the Serchio sector and pursued the retreating enemy from 18 April until the collapse of all enemy forces on 29 April 1945. Elements of the 92nd Division entered La Spezia and Genoa on 27th and took over selected towns along the Ligurian coast until the enemy surrendered on 2 May 1945. 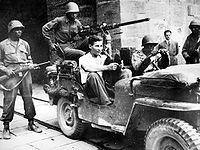 Soldiers of the 92nd Infantry Division with a captured German soldier.

Note: The MOH was not awarded to these recipients until 1997. 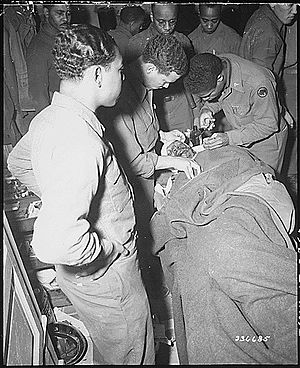