The 93 BS is one of the oldest and most decorated units in the United States Air Force, being organized as the 93d Aero Squadron on 21 August 1917 at Kelly Field, Texas. The squadron deployed to France and fought on the Western Front during World War I as a pursuit squadron. The unit was demobilized after the war in 1919.[2]

Re-organized in 1921 as part of the permanent United States Army Air Service, the squadron deployed to the Philippines in 1941, engaging in combat during the 1941-42 Battle of the Philippines at the beginning of World War II. Withdrawn to Australia, it fought in the Dutch East Indies campaign before returning to the United States and being re-equipped with B-29 Superfortress bombers. It returned to the Pacific Theater of Operations (PTO) in early 1945 to carry out strategic bombing missions over the Japanese Home Islands.[3]

During the Cold War it carried out B-29 bombardment missions over North Korea during the Korean War, later being a B-47 Stratojet and B-52 Stratofortress squadron as part of Strategic Air Command.[3]

Established as the 93d Aero Squadron in the Air Service during the summer of 1917 in Texas during World War I. Deployed to France in October 1917 and trained for aerial combat with the French Air Force. Deployed to the Western Front and the squadron flew combat missions in France as a pursuit unit from 11 August 1918 – 10 November 1918. Remained in France until March 1919 when the squadron returned to the United States and inactivated.

Was reactivated in 1939 as part of the General Headquarters Air Force as the 93d Bombardment Squadron, assigned to the 19th Bombardment Group at March Field, California. Initially equipped with Martin B-10s, later B-18 Bolos, receiving early model B-17C Flying Fortresses in 1939.

File:B-17E 41-2489 93d Bomb Squadron Suzy-Q.jpg
Boeing B-17E Fortress 41-2489, "Suzy-Q" was one of the most famous Flying Fortresses of the Pacific War. It was assigned to the 93d Bomb Squadron, 19th Bomb Group on 7 February 1942 and took part in all of the early Pacific battles except Midway, and is gunners claimed no less than 26 Japanese aircraft destroyed. It was named after the wife of the pilot, Major Felix Hardison, Commander of the 93d BS. Deployed to the Pacific, the aircraft operated from airfields in Australia and New Guinea before being returned to the United States in July 1944 and was operated from Hamilton Field, California until the end of the war. It was scrapped sometime after July 1946.

Deployed to the Philippines Air Force at Clark Field, Philippine Commonwealth in October 1941 as a reinforcement unit when tensions were escalating between the United States and the Japanese Empire. On 8 December 1941 many of the squadrons aircraft were destroyed during an air raid at Clark in the aftermath of the Pearl Harbor Attack; the survivors engaging on combat from secondary airfields against the invading Japanese forces until the situation in the Philippines became untenable and withdrew to Australia. The survivors of the ground echelon fought as infantry during Battle of Bataan and after their surrender, were subjected to the Bataan Death March, although some did escape to Australia and some presumably fought on as unorganized guerrilla forces during the Japanese occupation.

In Australia, the escaped airmen and aircraft of the squadron reformed into a combat unit; engaging in combat during the Dutch East Indies and New Guinea Campaigns flying heavy bomber combat missions from Australia. In late 1942, the B-17C/D and a few F models in Australia were replaced by long-range B-24 Liberators, and the unit was returned to the United States and became an operational training unit with Second Air Force for replacement B-17 personnel.

B-29 Superfortress operations against Japan 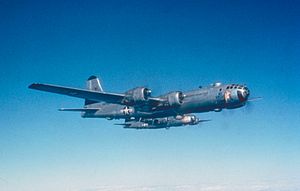 Re-designated on 1 April 1944 as a B-29 Superfortress Very Heavy bombardment squadron. When training was completed moved to North Field Guam in the Mariana Islands of the Central Pacific Area in January 1945 and assigned to XXI Bomber Command, Twentieth Air Force. Its mission was the strategic bombardment of the Japanese Home Islands and the destruction of its war-making capability.

Its groups flew "shakedown" missions against Japanese targets on Moen Island, Truk, and other points in the Carolines and Marianas. The squadron began combat missions over Japan on 25 February 1945 with a firebombing mission over Northeast Tokyo. The squadron continued to participate in wide area firebombing attack, but the first ten-day blitz resulting in the Army Air Forces running out of incendiary bombs. Until then the squadron flew conventional strategic bombing missions using high explosive bombs.

The squadron continued attacking urban areas until the end of the war in August 1945, its subordinate units conducted raids against strategic objectives, bombing aircraft factories, chemical plants, oil refineries, and other targets in Japan. The squadron flew its last combat missions on 14 August when hostilities ended. Afterwards, its B 29s carried relief supplies to Allied prisoner of war camps in Japan and Manchuria.

Remained on Guam after the war conducted sea-search, photographic mapping, and training missions in the western Pacific.

Deployed to Kadena AB, Okinawa in June 1950 as a result of the Korean War. Flew strategic bombing missions over North Korea; targets included an oil refinery and port facilities at Wonsan, a railroad bridge at Pyongyang, and Yonpo Airfield. After United Nations ground forces pushed the communists out of South Korea, the squadron turned to strategic objectives in North Korea, including industrial and hydroelectric facilities. It also continued to attack bridges, marshalling yards, supply centers, artillery and troop positions, barracks, port facilities, and airfields.

Continued bombardment operations until the June 1953 armistice in Korea; returned to the United States in May 1954; the squadrons B-29s being sent to reclamation.

Re-equipped with B-47 Stratojets in 1954 as part of Strategic Air Command. Flew strategic bombardment training missions until 1962 when B-47s were being phased out of the inventory. In 1960 was reassigned to SAC provisional 4133d Strategic Wing, being re-equipped with B-52H Stratofortress intercontinental heavy bombers. Was reassigned to Grand Forks AFB, North Dakota by SAC to disperse its heavy bomber force. Conducted worldwide strategic bombardment training missions and providing nuclear deterrent. Was inactivated in 1963 when SAC inactivated its provisional Strategic Wings, redesignating them permanent Air Force Wings. Squadron was inactivated with aircraft/personnel/equipment being redesignated 46th Bombardment Squadron in an in-place, name-only transfer.

Reactivated in the Air Force Reserve in 1993, conducting bombardment training. It won the B-52 category of the 1995 Gunsmoke competition and participated in training exercises through the 1990s.

In September 2001 deployed in support of Operation Enduring Freedom where it flew 88 combat missions before redeploying to Barskdale AFB in January 2002. It deployed in support of operations in Afghanistan again from May–September 2002. In March 2003 the 93d deployed to RAF Fairford and Diego Garcia in support of Operation Iraqi Freedom. Between March and August 2003 the 93d flew more than 100 combat sorties and dropped over 1 million pounds of munitions. From January–March 2005 the squadron deployed to Anderson Air Force Base, Guam as part of an ongoing bomber rotation to demonstrate the U.S. commitment to the Asian-Pacific region by the U.S. Pacific Command.