The 93rd Infantry Division was a "colored" segregated unit of the United States Army in World War I and World War II. During tough combat in France it soon acquired from the French the nickname Blue Helmets. This referred to the service of several of its units with the French Army during the Second Battle of the Marne. Consequently, its shoulder patch became a blue French Adrian helmet, to commemorate its service with the French Army during the Spring Offensive.[1]

The division was reactivated as infantry on 15 May 1942 at Fort Huachuca, Arizona, and shipped overseas in 1944. Most of the division did see service in the Pacific Theater during World War II, but the division's regiments were mainly utilized as construction units and in defensive operations. In 1945, the 93rd Infantry Division was inactivated, though the lineage of several of its units are carried on by the Illinois and Maryland Army National Guard.

The division was activated in December 1917 and sent to France; however, the troops never fought together as a division. Over the objections of the division's commander, Brig. Gen. Roy Hoffman (appointed 15 December 1917), its brigades were broken up and the regiments brigaded with French Army formations. They were issued French equipment and arms but wore US uniforms; the "blue hat" nickname is derived from the blue-painted Casque Adrian helmets they wore.

The regiments that later formed the 93rd were originally sent to France to be converted into badly needed labor units. However, the outcry by African-American leaders including W. E. B. Du Bois and A. Philip Randolph forced the US to reconsider. The alternative would be the potential loss of needed African-American recruits for labor and service units.

Four independent regiments were chosen to assume the designations of the 93rd (Provisional) Infantry Division's regiments (369th, 370th, 371st, and 372nd Infantry). The problem was, where to place them?

The main American Expeditionary Force (AEF) refused to have African-American soldiers in combat. Ironically, the commander of the AEF, Gen. John "Black Jack" Pershing had earned his nickname and reputation as an officer in the 10th Cavalry, then still a black Buffalo Soldier regiment. While Pershing was an early supporter of having "colored" soldiers in the military, he seems to have bowed to political expediency in this case.

The British already had several American divisions under their command. This was due to a deal struck with the American armed forces, which had no transport fleet when they entered the war. The United Kingdom and their Commonwealth allies would transport six American divisions by sea to Europe. Then the American divisions would be folded into British Corps. The French had a similar deal where they exchanged the Americans' 3" cannon for early-model French 75mm cannon to simplify the supply of ammunition and Chauchat light machineguns to replace their scarce Lewis Guns. In return, they demanded that American troops be placed under their command to replace their early-war losses.[6]

The regiments fought in several battles alongside French troops, who were already used to colonial North and Sub-Saharan African "colored" soldiers (noirs). All regiments acquitted themselves well and received unit citations from the French. Numerous individual soldiers exhibited extraordinary heroism and were highly decorated by the French. One of these was Cpl. Freddie Stowers, who decades after his death would be awarded the American Medal of Honor. The division's shoulder patch, with its blue French Adrian helmet, commemorated this period.

In May 1918, French General Mariano Goybet was ordered to command the French 157th Infantry Division, which had been decimated after the Third Battle of the Aisne. On 4 July 1918, it was reconstituted by putting together the 333rd Infantry Regiment (French) with two of the U.S. 93rd's regiments—the 371st and 372nd.

General Goybet took special notice of the fact this was the first 4 July to be celebrated by his now Franco-American Division.

The rebuilt 157th Division participated in the Second Battle of the Marne. With violent attacks, General Goybet broke the enemy front at Monthois, capturing many prisoners and a considerable amount of materiel in the process. Afterward, he occupied the Vosges, re-capturing Sainte Marie les Mines.

The bravery of the soldiers in the 371st and 372nd during this period has gained more recognition over time. In 1991, Freddie Stowers, a corporal in the 371st, posthumously received the Medal of Honor for actions taken in September 1918, becoming the first African-American soldier to do so for World War I service.[7] His two surviving sisters, Georgina and Mary, received the medal in a ceremony at the White House from President George H. W. Bush.

Served with the 369th Infantry Regiment (United States) aka "Harlem Hellfighters". Awarded the Medal of Honor (2015) and the DSC. 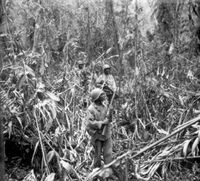 1 May 1944, members of the 93rd Division on the Numa-Numa Trail, Bougainville.

In August 1944, Major General Harry H. Johnson, the former commander of the 2nd Cavalry Division, assumed command of the Division, relieving Major General Lehman, who had returned to the United States for medical reasons. He would lead the division through the remainder of the war, including the New Guinea-Philippines campaign.

An advance party of the 93rd Infantry Division arrived at Guadalcanal on 29 January 1944. The rest of the division landed between 6 February and 5 March, one regiment disembarking at the Russell Islands on 7 February. The bulk of the division engaged in training, labor and security duties on Guadalcanal and the Treasury Islands from 7 June and both Hollandia and Dutch New Guinea from 30 October. Component units performed similar duties on Wake Island from 20 January to 2 October 1945, on Finschhafen from 12 October 1944 to 31 March 1945, on Los Negros from 29 September 1944 to 16 March 1945, and on Blak from 10 October 1944 to 1 October 1945. The division's combat elements moved to Bougainville Island on 28 March 1944, and were attached to the Americal Division on the 30th. On that date they entered combat, assisting in attacks on the enemy perimeter. These elements, including the 25th RCT, reconnoitered across the Laruma River on 2 April, and in the Torokina River Valley from 7–12 April 1944. The 25th RCT operated against the Japanese along the Kuma and East-West Trails during May 1944. The combat team left for the Green Islands during May and June. The 93d Rcn. Troop, attached to the XIV Corps, remained to raid, patrol, and maintain perimeter positions. The troop began training 12 September 1944, and moved to Finschhafen on 1 November. Security patrols had scattered contacts with the enemy at Urapas from 3 to 15 January 1945, at Wardo from 6 November-22 December, and at Wari on 31 December. The security detachments at Wardo and Wari were withdrawn on 9–10 February 1945.

Almost all of the Division occupied Morotai, Dutch New Guinea, from 4 April to 21 October 1945. Scattered skirmishes occurred along the northwestern sector of the island. The 93rd continued its labor and security missions. It occupied Sansapor from 5 April to 10 July 1945, Middleburg Island from 5 April to 7 October 1945, and Noemfoor Island from 13 April to 7 June 1945. The Division then moved to Zamboanga, Philippine Islands, where it remained from 1 July 1945 to 7 January 1946. Patrols encountered light resistance until the end of hostilities, 15 August 1945. Palawan was occupied from 2 July to 5 December 1945, Jolo from 1 July to 2 October 1945, and Sanga-Sanga from 3 July 1945 to 6 January 1946. The Division arrived at Mindanao on 9 October 1945, moved to Tacloban, Leyte on 13 January 1946, and left for home on 17 January 1946.

While on Jolo on 17 July 1945, a patrol from the 368th was ambushed by a Japanese force three times its size. When the firefight began, Sergeant Leonard E. Dowden moved his squad to within 30 yards of the enemy. He then crawled forward alone to assault a machine-gun position with grenades, despite being gravely wounded. He would be killed by a burst of fire as he was about to throw a grenade. The patrol was able to fight off the enemy attack with only 18 casualties. For the extraordinary heroism that cost him his life, Staff Sergeant Dowden received the Distinguished Service Cross. Originally from New Orleans, Louisiana, Staff Sergeant Dowden was the only member of the 93rd Infantry Division to earn the DSC during the war.[8] 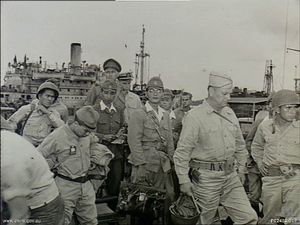 For the remainder of the war, the division would find itself fighting on Morotai. In April 1945, the division conducted intensive patrols with the aim of destroying the remaining Japanese forces on the island. At this time most of the Japanese on Morotai were located along the island's west coast, and generally stayed close to native gardens. The 93rd Division landed patrols along Morotai's west and north coasts from late April onwards, and these fought scattered skirmishes with small Japanese forces. One of the division's main goals was to capture Colonel Ouchi, commander of the 211th Regiment, 32nd Division,[9] and this was achieved by a patrol from the 25th Infantry Regiment on 2 August 1945. Ouchi was the highest ranking Japanese officer to be captured before the end of the war.[9]

End of the war

After the Japanese capitulation in August 1945, the division secured the surrender of 41,000 Japanese troops and civilians on Morotai and the nearby Halmahera islands of the Dutch East Indies. Included were 37,000 troops, of whom 5,000 were in a naval force and 4,000 were civilians. The surrender was accepted on Morotai by Major General Johnson. Lt. General Ishii, the commander of the IJA 32nd Division and the senior surviving officer in the area, surrendered the Japanese Army forces to the 93rd after he was brought to Morotai on a U.S. Navy PT boat.[10]

After the signing Ishii asked Maj. General Johnson if he and his officers would be allowed to retain their samurai swords. Johnson refused and afterwards commented,