Over the next fifty years the division would see numerous changes to its structure as its training roles changed and subordinate units shifted in and out of its command. It activated a large number of regimental and brigade commands to fulfill various training roles. The division then began conducting one station unit training, a responsibility it continues to this day.

The 95th Division was first constituted on 4 September 1918 in the national army. It was organized that month at Camp Sherman, Ohio.[4] The division was organized with the 189th Infantry Brigade and the 190th Infantry Brigade of the Oklahoma organized reserve.[5] The division was slated to be deployed overseas to fight in World War I. Training of all of the Division's units began immediately.[6] On 11 November, the Armistice with Germany was signed, ending the hostilities. The division's deployment was cancelled and it was demobilized in December 1918.[4] All of the division's officers and enlisted men were discharged from the military or transferred to other units.[6] On 24 June 1921, the division was reactivated in the organized reserves.[4] From that point until 1942, the division remained as a reserve unit based in Oklahoma City.[6]

On 15 July 1942, the division was ordered into active military service and reorganized at Camp Swift, Texas.[4] The 189th and 190th Infantry Brigades were disbanded as part of an army-wide elimination of infantry brigades. Instead, the division was based around three infantry regiments, the 377th Infantry Regiment, the 378th Infantry Regiment, and the 379th Infantry Regiment.[7] Also assigned to the division were the 358th, 359th, 360th, and 920th Field Artillery Battalions, the 95th Signal Company, the 795th Ordnance Company, the 95th Quartermaster Company, the 95th Reconnaissance Troop, the 320th Engineer Battalion, the 320th Medical Battalion, and the 95th Counter-Intelligence Detachment.[7] Major General Harry L. Twaddle took command of the division, a command he held for its entire duration in World War II,[8] making him one of only eleven generals to do so.[9] The division also received a Shoulder Sleeve Insignia this year.[10] Over the next two years, the division trained extensively in locations throughout the United States.[6]

The 95th Infantry Division was assigned to XIII Corps of the Ninth United States Army, Twelfth United States Army Group.[11] The division sailed for Europe on 10 August 1944.[12] The 95th Infantry Division arrived in England on 17 August. After receiving additional training, it moved to France one month later on 15 September. During this time it was reassigned to III Corps.[11] The division bivouacked near Norroy-le-Sec, from 1 to 14 October.[12] It was then assigned to XX Corps of the Third United States Army.[11] The division was sent into combat on 19 October in the Moselle bridgehead sector east of Moselle and South of Metz and patrolled the Seille near Cheminot, capturing the forts surrounding Metz and repulsing enemy attempts to cross the river.[12] It was during the defense of this town from repeated German attacks that the division received its nickname, "The Iron Men of Metz."[1] On 1 November, elements went over to the offensive, reducing an enemy pocket east of Maizières-lès-Metz. On the 8 November, these units crossed the Moselle River and advanced to Bertrange. Against heavy resistance, the 95th captured the forts surrounding Metz and captured the city by 22 November.[12]

The division pushed toward the Saar on 25 November and entered Germany on the 28th. The 95th seized a Saar River bridge on 3 December and engaged in bitter house-to-house fighting for Saarlautern.[12] Suburbs of the city fell and, although the enemy resisted fiercely, the Saar bridgehead was firmly established by 19 December. While some units went to an assembly area, others held the area against strong German attacks.[12] On 2 February 1945, the Division began moving to the Maastricht area in the Netherlands, and by 14 February, elements were in the line near Meerselo in relief of British units.[12] During this time the division returned to the Ninth Army under XIX Corps, though saw temporary assignments to several other corps through the spring.[11]

On 23 February, the division was relieved, and the 95th assembled near Jülich, Germany, on 1 March. It forced the enemy into a pocket near the Hitler Bridge at Uerdingen and cleared the pocket on 5 March, while elements advanced to the Rhine.[12] From 12 March, the 95th established defenses in the vicinity of Neuss. Assembling east of the Rhine at Beckum on 3 April, it launched an attack across the Lippe River the next day and captured Hamm and Kamen on the 6th.[12] After clearing the enemy pocket north of the Ruhr and the Möhne Rivers, the division took Werl and Unna on 9/10 April, Dortmund on 13 April and maintained positions on the north bank of the Ruhr.[12] It held this position until the end of the war.

The division returned to the United States on 29 June 1945 where it began the process of preparing to join the invasion forces of the Japanese Island of Honshu as part of the First United States Army. With the ending of the war in Japan, the division, remaining on orders for the Pacific, staged a minor mutiny before the orders were changed. This resulted in the division being demobilized and releasing its soldiers from Army service. It was inactivated on 15 October 1945 at Camp Shelby, Mississippi.[12] The division spent 151 days in combat, suffering 1,128 killed in action, 4,783 wounded in action, 394 missing in action, and 65 prisoners of war. The division also suffered 3,834 non-battle casualties, for a total of 10,204 casualties during World War II. The division in turn took 31,988 German prisoners.[13] Soldiers of the division were awarded one Medal of Honor, 18 Distinguished Service Crosses, 14 Legion of Merit Medals, 665 Silver Star Medals, 15 Soldier's Medals, 2,992 Bronze Star Medals, and 162 Air Medals. The division was awarded one Presidential Unit Citation and four campaign streamers during its time in combat.[13]

The division was reactivated on 13 May 1947 at Oklahoma City as a reserve unit. However, it was not mobilized for any combat duties following World War II.[4] In 1952, the division underwent reorganization, with the first change being the addition of the 291st Infantry Regiment of Tulsa, Oklahoma, from the 75th Infantry Division.[6] The second change that year for the division was the withdrawal of assignment of the 377th Infantry Regiment from the 95th, which was transferred to the 75th Infantry Division. The 377th had headquartered in New Orleans, Louisiana since its activation after World War II.[6]

The year 1955 saw further changes to the division and more changes of assignment for subordinate elements. On 1 January 1955, the 291st Regiment was again assigned to the 75th Infantry Division from the 95th and was subsequently inactivated on 31 January 1955.[6] On 30 January, the 377th Regiment was reassigned to the 95th from the 75th and its headquarters moved from New Orleans to Tulsa, Oklahoma. The same date saw the relocation of the 379th Regimental headquarters from Hot Springs, Arkansas where it had been since 1947, to Little Rock, Arkansas.[6] 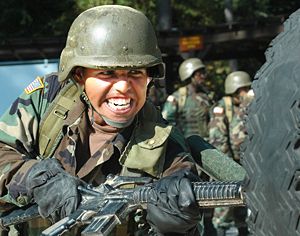 On 1 April 1958 the 95th Infantry Division was redesignated as the 95th Division (Training) and a major reorganization of mission assignments was underway. Personnel trained for infantry combat, field artillery, military police and combat support roles were now to undergo re-training to enable them to train others.[6] The division had a new role as one of the 13 Training Divisions in the Army Reserve. The same year the division's size increased as the 291st Regiment was reassigned again from the 75th and was redesignated as 291st Regiment (Advanced Individual Training). With the reorganization of the division all of the regiments were redesignated. The 95th Divisional Artillery became the 95th Regiment (Common Specialist Training) with headquarters at Shreveport, Louisiana. The 377th became the 377th Regiment (Basic Combat Training), as did the 378th and 379th, and all were reassigned new training sites.[6] In 1966, the division received a distinctive unit insignia.[10]

The division experienced tremendous expansion in October 1984 with the addition of the 4073d US Army Reception Station, in Lafayette, Louisiana with a strength of 809 personnel.[6] The 402nd Brigade was also activated under the division's administrative control. It was designated to expand the training base for the Army's Field Artillery Training Center located at Fort Sill, Oklahoma.[6] In 1989 the division's location was returned to Oklahoma City.[4]

In 2000, the brigade took on the additional responsibility of training Reserve Officer's Training Corps cadets. The 8th Brigade, 95th Division was activated as a provisional unit in charge of ROTC units throughout the southwestern United States.[16] In 2005, the division headquarters were relocated to Fort Sill, Oklahoma. This put the division at the area's major training center, allowing it to more effectively provide training oversight.[4]

The division has never received a unit award from the United States Army.[4] However, in a recent ceremony in Columbus, Indiana a bridge was named "Iron Men of Metz Memorial Bridge"[17]

In the 1962 film, Hell Is for Heroes, the actors wear the 95th Division's shoulder patch on their uniforms. The division is also an element of the Legacy of the Aldenata book series.

A number of soldiers who served with the 95th Division later went on to achieve notability for various reasons. They include journalist Harry Ashmore,[18] writer Jerry Rosholt, oil tycoon Ernest L. Massad, and Lieutenant General Emmett H. Walker, Jr.. Additionally, one soldier of the division received the Medal of Honor during his service, Andrew Miller, who received the medal in World War II during the division's fight for Metz. Miller captured a number of German machine gun nests and soldiers while leading a squad of men in assaulting the city.[19][20] German born (MG) Gerd Grombacher served as an NCO interrogating POWs and was commissioned 2LT Grombacher in January 1945. He directly assisted in the negotiations for the capture of Metz in 1944.