The 9K111 Fagot (Russian: Фагот; "bassoon") is a second-generation tube-launched SACLOS wire-guided anti-tank missile system of the Soviet Union for use from ground or vehicle mounts. The 9K111 Fagot missile system was developed by the Tula KBP Design Bureau for Instrument Building. "9M111" is the GRAU designation of the missile. Its NATO reporting name is AT-4 Spigot.

The 9K111 Fagot was developed by the Tula Machinery Design Bureau (Tula KBP). Development began in 1962 with the aim of producing the next generation of SACLOS ATGMs for use in both the man portable role and the tank destroyer role. The 9K111 Fagot was developed alongside the 9M113 Konkurs; both missiles use similar technology – only differing in size – and can use the same launchers.

The missile entered service in 1970.

The anti-tank platoon of a Soviet BTR equipped motor rifle battalion had two (sometimes three)[2] ATGM squads, each with two 9K111 Fagot teams. The team consisted of three men – the gunner carries the 9P135 launcher and tripod as a back pack – the other two men each carry two launch tubes. The men also carry assault rifles, but do not carry an RPG – because, unlike the earlier missiles, there is only a small deadzone within which the missile cannot engage the target. Besides the four missiles carried by each team, each squad would normally have an extra eight missiles carried in their transport, usually a BTR. It can also be deployed from the BMP-1P, BMD-1P, BTR-D and UAZ-469.

North Korea was said to have acquired a number of the systems during the late 1980s till 2000s from the USSR. These were subsequently reverse-engineered under the designation Bulsae-2.[3] A further upgrade called the Bulsae-3 was introduced in 2016 that replaced the wire-guidance with laser guidance, which gives greater range while being less susceptible to jamming like wireless radio-guidance and enables the designator to be separate from the launcher.[4][5] 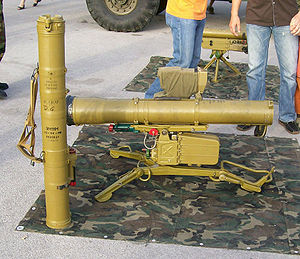 The missile is stored and carried in a container/launch tube. It is fired from a 9P135 launcher post – a simple tripod. A 9S451 guidance box is fitted to the tripod – with the missile sitting just above. The 9Sh119 sight is fitted to the left side (from the gunner's POV). The complete launcher system weighs 22.5 kg (50 lb). The gunner lays prone while firing. The system can engage moving targets, provided that they are travelling at less than 60 km/h (37 mph). The launcher post can traverse through 360 degrees horizontally, and +/− 20 degrees in elevation. The sight has a magnification of 10x and a 5 degree field of view. Up to three missiles a minute can be fired from a launcher post.

The system uses a gas generator to push the missile out of the launch tube – the gas exits from the rear of the launch tube in a manner similar to a recoilless rifle. The missile leaves the launch tube at 80 m/s (180 mph; 290 km/h). It is quickly accelerated to 186 m/s (420 mph; 670 km/h) by its solid fuel motor. This initial high speed reduces the missile's deadzone, since it can be launched directly at the target, rather than in an upward arc.

The launcher tracks the position of an incandescent infrared bulb on the back of the missile relative to the target – and transmits appropriate commands to the missile via a thin wire that trails behind the missile. The SACLOS guidance system has many benefits over MCLOS, with the accuracy of the system stated as 90% in some sources, though its performance is probably comparable to the TOW or the later SACLOS versions of the 9K11 Malyutka. 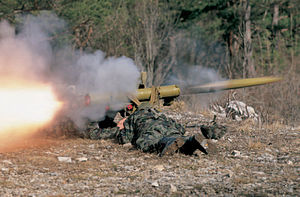 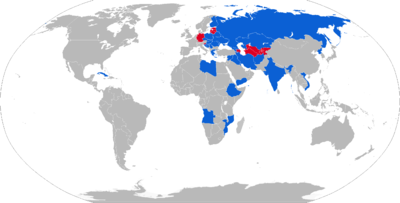