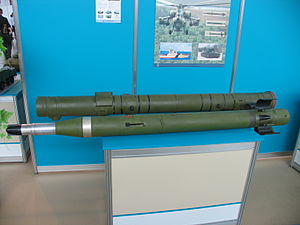 A Shturm missile on display.

9K114 Shturm (Russian: 9К114 «Штурм»- "shturm" means storm (assault) in German) is a SACLOS radio guided anti-tank missile system of the Soviet Union. Its GRAU designation is 9K114.[1] Its NATO reporting name is AT-6 Spiral. The missile itself is known as the 9M114 Kokon (Cocoon).

The missile was developed by the Kolomna Machine Design Bureau, which was also responsible for the 3M6 Shmel and 9M14 Malyutka. Work on the missile began in 1967, with the hope of using the missile on Mi-24s. However, delays forced the design of an upgraded Falanga system (9M17 Skorpion) using SACLOS guidance as a stopgap. Testing of the missile was completed in 1974, and it was accepted into service in 1976. The missile has no direct western counterpart, though, in role, it is closest to the AGM-114 Hellfire, and in guidance method, to the MGM-18 Lacrosse.

It was originally given the NATO designation AS-8, before being redesignated as AT-6.[2] 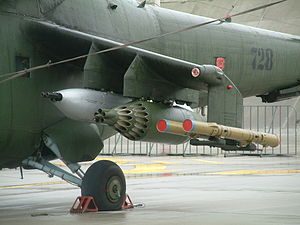 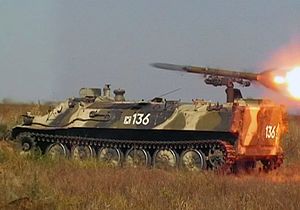 The missile can be deployed on a variety of platforms, including the Mi-24V and from 1979-onwards the MT-LB based 9P149 tank destroyer. There is also a shipborne version of the missile, with the launcher holding six missiles.

The missile is transported and launched from a glass-reinforced plastic tube. The missile uses a Soyuz NPO solid-rocket sustainer, with a small booster stage to launch the missile from its tube.

The missile is SACLOS with a radio command link. The use of a radio link allows the missile to travel much faster and further than if it were wire guided. The radio link is a VHF system with five frequency bands and two codes to minimize the risk of jamming. The system comprises a KPS-53AV 8x daylight-only direct vision sight with an integrated laser rangefinder. After the missile is launched, the gunner has to keep the sight's crosshairs on the target until impact. Appropriate steering commands are transmitted to the missile via the radio link.

The missile flies above the gunner's line of sight to the target. With the range of the target determined by the laser rangefinder, the missile descends onto the target just before impact. This is done primarily to clear obstacles, instead of achieving a top-attack, and can be switched off. It is possible to engage low and slow moving helicopters with the system; however, since the missile only has a contact fuze, a direct hit would be needed.

Soviet sources report kill ratios of 75-85% during the Soviet invasion of Afghanistan. Also a Mil demonstration in Sweden in late 1995 using a Mi-28A firing Shturm and Ataka missiles also showed good results: from a hovering helicopter, a Shturm was fired at a target 900 m away; and from level flight at 200 km/h an Ataka was fired at a target 4,700 m away. Both missiles passed within 1 m of their aiming point.[3]

30 June 2014 adopted by the Russian army modernized self-propelled antitank missile system 9K132 «Shturm-SM» having a sight with television and thermal channels as well as a new missile with a high-explosive fragmentation warhead and a proximity fuse.[4] 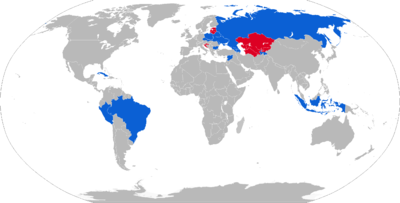