From Infogalactic: the planetary knowledge core
Jump to: navigation, search
"SA-8" redirects here. For the Apollo flight, see A-104 (SA-8).

The SA-8 was the first mobile air defense missile system incorporating its own engagement radars on a single vehicle.

All versions of the 9K33 feature all-in-one 9A33 transporter erector launcher and radar (TELAR) vehicles which can detect, track and engage aircraft independently or with the aid of regimental surveillance radars. The six-wheeled transport vehicles BAZ-5937 are fully amphibious and air transportable. The road range is about 500 km.

The 1S51M3-2 radar system on the SA-8 TELAR received the NATO codename Land Roll. It was derived from the naval `Pop Group' radar system but is smaller since it does not require the elaborate stabilisation system. An improved system designated the SA-8B `Gecko' Mod 1, was first seen in Germany in 1980. It had improvements added to the launcher configuration, carrying six missiles in ribbed containers. The system is reported to be of the frequency-agile monopulse type. It consists of an elliptical rotating surveillance antenna mounted on top of the array, operates in H band (6 to 8 GHz) and has a 30 km acquisition range against most targets. The large pulsed J band (14.5 GHz) engagement antenna is mounted below it in the centre of the array and has a maximum tracking range of about 20 km.

Mounted on either side of the tracking radar antenna is a small J band parabolic dish antenna to track the missile. Below that is a small circular antenna which emits an I band uplink capture beam to gather the missile shortly after launch. The final antennas in the array are two small white rectangular ones, one on either side of the array mounted alongside the I band. These are used for command uplink to the missile. This twin antenna system permits the 'Land Roll' radar to control up to two missiles simultaneously against a single target. Furthermore, the two missiles can be guided on different frequencies to further complicate ECM. There is also a tubular device fitted to and above the tracking radar; this is a 9Sh33 electro-optical tracker. It can be used to track the target when the main tracking radar is jammed by ECM.

A 9K33 battery comprises four 9A33B TELAR vehicles and two 9T217 transloader vehicles on BAZ-5939 chassis with reload missiles and a crane. A reload time of five minutes has been reported per TELAR.

In addition to the TELARs, each regiment is also assigned a single radar collimation vehicle 9V914 (initially on the BAZ-5938 chassis but more often found on the ZiL-131 truck). This vehicle assists in the alignment of the TELAR's radar systems, ensuring accurate target tracking and engagement.

The 9K33M3 is also able[citation needed] to utilize the 9A33BM3 missiles which are wire-guided, presumably for use in an ECM-heavy environment where the radio command guidance may not operate properly.

The 9M33 missiles are 3.158 m (10.3 ft) long, weigh 126 kg (278 lb) and use command guidance. There is also a backup low-light optical tracking system for heavy ECM environments. The latest 9M33M3 missiles have an increased total weight of 170 kg (375 lb) in order to provide the extended range coverage and larger warhead. Propulsion is provided by a dual-thrust solid fuel rocket motor. Both versions feature a missile speed of around Mach 2.4 (peaking at around Mach 3) for a maximum target engagement speed of around Mach 1.4 for the original missile and Mach 1.6 for the M2\M3 missiles. The warhead for the initial and M2 versions weighs 19 kg (42 pounds), increased to 40 kg (88 lb) in the M3 version to improve performance against helicopters. All versions have impact and proximity fuzes.

There have been unconfirmed reports of other possible versions of the missile with both infra-red and semi-active radar terminal homing seekers.

Each TELAR is able to launch and guide two missiles against one target simultaneously. Kill probability is quoted as being 0.35-0.85 for the Osa and 0.55-0.85 for the Osa-AK and Osa-AKM (presumably depending upon target aspect, speed, maneuverability and radar cross section). Reaction time (from target detection to launch) is around 26 seconds. Time to prepare for engagements from being in transit is around 4 minutes and missile reloading takes around 5 minutes. Each battery of four TELARs is usually accompanied by two reload vehicles carrying 18 missiles in sets of three, with a crane mounted on the reload vehicles to assist in moving the missiles.

When launched the booster motor burns for two seconds, this permits the radar to gather and control it at very short ranges (about 1.6 km). The sustainer motor has a 15-second burn, bringing the missile to a top speed of about Mach 2. Once launched the missile is command-guided for the whole flight, and the warhead is detonated by its proximity fuze or possible command. The warhead is said to have a lethal radius of 5 m at low altitude against a F-4 Phantom size target.[citation needed]

As well as the USSR/Russia, there are many export customers for this system, including Cuba, Greece (from the former East Germany), Poland, Syria, Ecuador and Iraq. In late 80's Cuba deployed several SA-8 units in southern Angola and posed a significant threat to South African air superiority at shorter ranges.[5] Iraq used Osa systems during the 1991 Gulf War. South African 61 Mechanised Battalion Group captured a complete SA-8 anti-aircraft missile system on 3 October 1987 during the Battle of Cuito Cuanavale. This was the first time that such a system had ever fallen into non-Warsaw Pact forces hands, giving Western intelligence agencies an opportunity to examine an important Soviet-bloc weapon system.[6] The system was also seen used in the 2008 South Ossetia War by both Georgians and Russians. Libyan SA-8s were used and some destroyed during the 2011 Libyan war.[7][8]

During the Syrian civil war in December 2012, rebels fighting Bashar al-Assad's forces managed to capture at least one Osa system after a raid on an air defense base near Damascus.[9] Later, on different occasions, videos showing rebels using the system appeared. On 31 July 2013, a video surfaced showing the successful missile launch for a rebel operated Osa system with a possible hit on a Syrian helicopter.[10] On 16 January 2014 a video of the shooting down of a Syrian Mi-8 or Mi-17 helicopter was uploaded. The heavy damage on the plunging helicopter appeared to confirm the use of a bigger missile to hit the helicopter compared to the damage caused by MANPADS. Also, a video filming the TV screen inside the Osa vehicle matches another video taken outside. Another video surfaced on 18 January 2014, this time missing the intended target.[11] On 15 October 2015 Russian military reported that a 9K33 Osa Launcher captured by rebel forces was destroyed in an air strike by a Russian Su-34 bomber near Damascus.[12] 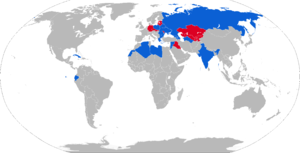