From Infogalactic: the planetary knowledge core
Jump to: navigation, search
"AT-10" redirects here. For the aircraft, see AT-10 Wichita. 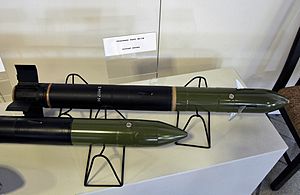 The 9K112 Kobra (AT-8 Songster) was the first Soviet tube fired anti-tank missile to enter service; however, it was only deployed in limited numbers to front line units. Development work began in the late 1970s on a third generation of guided projectiles that would use laser guidance rather than radio command links. The guidance system was developed by Igor Aristarkhov, and the missile was developed by Petr Komonov.[2] The Bastion was developed firstly as a relatively cheap missile fired from towed MT-12 100 mm smoothbore AT-guns.[1] The 9M117 missile was part of the 3UBK10 round and the whole weapon system was designated 9K116 Kastet. A laser guidance device was seated on a tripod next to the gun.[1] The system was commissioned in 1981.[1]

The 100 mm round resembles a normal 100 mm anti-tank round, and is loaded and fired in the same fashion. The round uses a reduced explosive charge to launch the projectile out of the barrel of the gun at around 400 to 500 m/s. After leaving the gun barrel, a small cover falls away from the window on the rear of the missile. The rocket motor ignites 1.5 seconds after firing the missile, and it burns for 6 seconds.

The projectiles use laser guidance. A cone of laser light divided into sectors is projected from the launching tank/vehicle/gun, each sector having a different frequency or modulation. The missile has a small window in the rear with a sensor to detect the modulation of the light. Using this modulation, the missile steers itself, maintaining its position in the cone. The laser beam-riding guidance system is smaller than a radio command one, and cheaper and simpler than semi-active laser guidance. The missile is also not prone to radio or optical jamming.[1] On the other hand, a target has to be tracked by laser sight all the time, and the system can not be reliably used on the move.[3]

The missile's flight time to 4,000 meters is approximately 12 seconds. After 26 to 41 seconds, the missile self-destructs.