The 9M120 Ataka (Russian: Атака; Attack) is an anti-tank guided missile (ATGM) originating from the Soviet Union.[3] The NATO reporting name of the 9M120 missile is the AT-9 Spiral-2. It is the next major generation in the 9K114 Shturm (AT-6 Spiral) family. The missile has radio command guidance and is also a Beam riding SACLOS. This missile's primary variant was designed to defeat tanks with composite armour and explosive reactive armor. The 9M120 Ataka system is often confused with the 9K121 Vikhr system, despite being different weapons systems developed by different companies. The former was designed by the KBM machine-building design bureau and manufactured by the Degtyarev plant. According to the Stockholm International Peace Research Institute, Russia exported the Ataka ATGM to Iran, Kazakhstan, and Slovenia.[4]

The AT-9 missile was developed by the Kolomna engineering design bureau, located in Kolomna.[1] This company already designed previous ATGMs, such as the AT-3 "Sagger" and AT-6 "Spiral" missiles. The design work began in the mid 1980s. The Ataka ATGM was designed as a successor model to the AT-6 "Spiral", which was introduced in the late 1970s. The AT-9 is a further development of the AT-6. Compared to its predecessor, the AT-9 is more resistant to electronic countermeasures, and has a greater hit accuracy and longer reach. The newly developed warhead allows for increased penetration power and effectiveness against explosive reactive armor. The first units were delivered in 1985 to the Soviet armed forces.[5]

The missile has often been confused in the west with the 9A1472 Vikhr dual-purpose laser beam riding missile used on the Kamov helicopters and Sukhoi attack aircraft (as well as some Ukrainian Mi-24/35 upgrades). These systems are completely unrelated in their design and are in fierce competition. 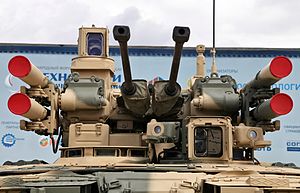 The primary armaments of the BMPT include four Ataka-T missiles with two mounted on each side.[6]

The Ataka missile is stored in a glass reinforced plastic tube, which also acts as its launcher. The missile is reported to be considerably faster than the AT-6 Spiral, with longer range than the original version. It still uses radio command guidance, but the system has been improved when compared to the earlier 9K114 Shturm.

The system is carried by the multiple kinds of helicopters including the Mi-28 and Mi-35. It is also offered for ground vehicles like the BMPT and the 9P149.

There are three main missiles that are compatible with the launch system. The first is a two-stage anti-armour weapon that features a tandem warhead for dealing with add-on armor. The second variant of the missile – designated as 9M120F – has a thermobaric warhead for use against infantry positions and bunkers. The third variant of the 9M120 Ataka is the 9M220, which features a proximity fused expanding rod warhead, providing the missile with air-to-air capability against low- and slow-flying aircraft. 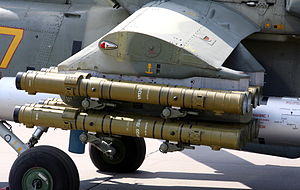 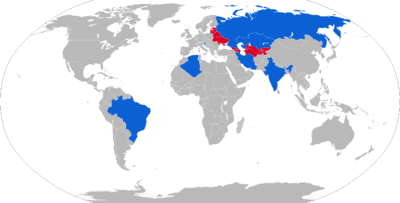