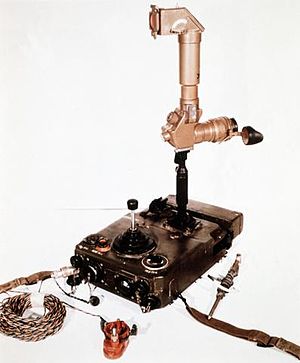 A 9S415 control box for the Malyutka missile.

The 9M14 Malyutka (Russian: Малютка; "Little one", NATO reporting name: AT-3 Sagger) is a manual command to line of sight (MCLOS) wire-guided anti-tank guided missile (ATGM) system developed in the Soviet Union. It was the first man-portable anti-tank guided missile of the Soviet Union and is probably the most widely produced ATGM of all time—with Soviet production peaking at 25,000 missiles a year during the 1960s and 1970s. In addition, copies of the missile have been manufactured under various names by at least five countries.

Development began in July 1961 with the government assigning the project to two design teams: Tula and Kolomna. The requirements were:

The designs were based on the western ATGMs of the 1950s, such as the French ENTAC and the Swiss Cobra. In the end, the prototype developed by the Kolomna Machine Design Bureau, who were also responsible for the AT-1 Snapper, was chosen. Initial tests were completed by 20 December 1962, and the missile was accepted for service on 16 September 1963.

The missile can be fired from a portable suitcase launcher (9P111), ground vehicles (BMP-1, BRDM-2) and helicopters (Mi-2, Mi-8, Mi-24, Soko Gazelle). The missile takes about five minutes to deploy from its 9P111 fibreglass suitcase, which also serves as the launching platform.

The missile is guided to the target by means of a small joystick (9S415), which requires intensive training of the operator. The operator's adjustments are transmitted to the missile via a thin three-strand wire that trails behind the missile. The missile climbs into the air immediately after launch, which prevents it from hitting obstacles or the ground. In flight, the missile spins at 8.5 revolutions per second—it is initially spun by its booster, and the spin is maintained by the slight angle of the wings. The missile uses a small gyroscope to orient itself relative to the ground; as a result, the missile can take some time to bring back in line with the target, which gives it a minimum range of between 500 and 800 m. For targets under 1,000 m, the operator can guide the missile by eye; for targets beyond this range the operator uses the 8x power, 22.5 degree field of view 9Sh16 periscope sight.

The engagement envelope is a 3 km, 45 degree arc centered on the missile's launch axis. At ranges under 1.5 km, this arc reduces until, at the 500 m range, the missile can only hit targets 50 m either side of the center line. Accuracy falls off away from the launch axis—falling to approximately half its optimal accuracy at the extremes.

While early estimates of the missile hitting the target ranged from 60 to 90%, experience has shown that it can drop to an efficiency between 2 and 25% in case of less than optimal conditions and lack of skill from the operator. In fact, MCLOS requires considerable skill on the part of the operator: according to some sources, it takes 2,300 simulated firings to become proficient with the missile as well as 50 to 60 simulated firings a week to maintain the skill level.[citation needed] Nevertheless, the weapon has always been quite popular with its operators and has enjoyed a constant updating effort both in the Soviet Union/Russia and in other countries.

The two most serious defects of the original weapon system are its minimum range of between 500 and 800 m (targets that are closer cannot be effectively engaged) and the amount of time it takes the slow moving missile to reach maximum range—around 30 seconds—giving the intended target time to take appropriate action, either by retreating behind an obstacle, laying down a smoke-screen, or by returning fire on the operator.

Later versions of the missile addressed these problems by implementing the much easier to use SACLOS guidance system, as well as upgrading the propulsion system to increase the average flight speed. The latest updates sport tandem warheads or probes in order to counteract explosive reactive armour as well as thermal imaging systems. Even in these latest version, the Malyutka is probably the most inexpensive ATGM in service, with unitary price caps in the order of the hundreds of dollars instead of the tens of thousands of the latest third generation models.

In Soviet service, the man-portable version was deployed as part of the anti-tank platoon of motor rifle battalions. Each platoon had two Malyutka sections, each with two teams. Each team had two launcher stations. One assistant gunner in each team served as an RPG-7 gunner. The RPG-7 was needed to cover the 500 meter deadzone created by the minimum range of the missile.

It is also an integrated part of the BMP-1, BMD-1, and BRDM-2 vehicles.

On 23 April 1972, the recently organized ARVN (Army of the Republic of Vietnam) 20th Tank Regiment was attacked by the NVA (North Vietnamese Army) employing the 9M14M Malyutka anti-tank guided missile for the first time.[3] The 20th was the only South Vietnamese armor unit equipped with the M48 Patton tank. This first employment of the Malyutka destroyed one M48A3 and one M113 armored cavalry assault vehicle (ACAV), and a second ACAV was damaged.[4]

During this engagement with the weapon, the ARVN tankers appeared fascinated by the missile's slow and erratic flight,[5] but through experience, they soon deployed counter measures against the weapon system. Upon launching by the enemy, ARVN crewmen would fire all their weapons towards the Sagger's firing position, which would make the gunner flinch and lose control of his missile. Although the gunner could take cover away from the launch site, the joystick control wire only allowed 15 meters of clearance. During the engagement, the ARVN eventually lost eight tanks to the 9M14M missile, but had developed tactics to defend themselves against it.[3]

The missile was employed by Arab armies during the initial phases of the Yom Kippur War.[6] Later in the war, the Israelis adopted new tactics and learned to neutralize the Sagger threat by employing large concentrations of artillery fire to either distract or kill the Sagger operators.[6] Other improvised methods used by the Israelis to defeat the Saggers involved firing in front of the tank to create dust, moving back and forth and firing at the source of Sagger fire.[7] These Israeli tactics were later adopted by NATO forces to counter the threat posed by Warsaw Pact ATGMs.[7] In total, Saggers knocked out more than 800 Israeli tanks and other combat vehicles during the war.[8]

Rebels of the Free Libyan Army have been filmed using Saggers during the Libyan Civil War.[9][10]

Syrian rebels have also uploaded videos of their Sagger firings against government forces since late 2012.[11] 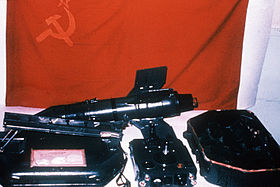 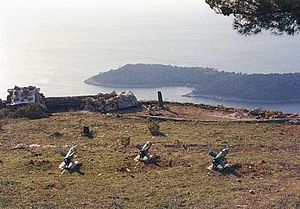 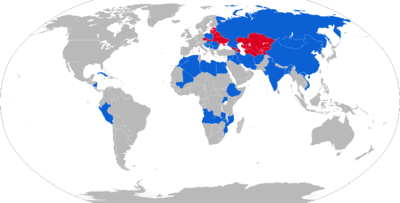 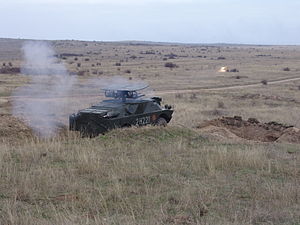 Romanian 9P133 "Malyutka" launching a missile during a military exercise.