The 9th Armored Division was cited for extraordinary heroism and gallantry in combat in the vicinity of Waldbillig and Savelborn, Luxembourg from 16–22 December 1944 during which they repulsed constant and determined attacks by an entire German division. Outnumbered five to one, with its infantry rifle companies surrounded for most of the time, clerks, cooks, mechanics, drivers and others manned the 10,000 yards (9,100 m) final defensive line. Supported by the outstandingly responsive and accurate fire of its artillery battalion, this widely dispersed force stopped every attack for six days until its surrounded infantry were ordered to fight their way back to them. This staunch defense disrupted the precise German attack schedule and thus gave time for the United States III and XII Corps to assemble unhindered and then launch the coordinated attack which raised the siege of Bastogne and contributed to saving much of Luxembourg and its capital from another German invasion.[citation needed] They were awarded the Presidential Unit Citation for their heroism.

The 9th Division was one of several real U.S. Army divisions that participated in Operation Fortitude, the deception operation mounted by the Allies to deceive the Germans about the real landing site for Operation Neptune, the amphibious invasion of Northern France. The 9th was assigned to a camp on the British coastline opposite of the German defenses in Pas-de-Calais, ostensibly as part of the "First US Army Group" (FUSAG) under Gen. John W. Leonard.

The 9th Armored Division landed in Normandy late in September 1944, and first went into line, 23 October 1944, on patrol duty in a quiet sector along the Luxembourg-German frontier. When the Germans launched their winter offensive on 16 December 1944, the 9th, with no real combat experience, suddenly found itself engaged in heavy fighting. The Division saw its severest action at St. Vith, Echternach, and Bastogne, its units fighting in widely separated areas. 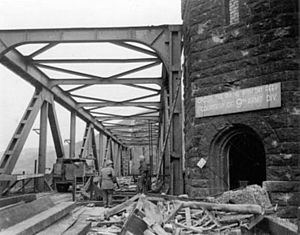 Its stand at Bastogne held off the Germans long enough to enable the 101st Airborne to dig in for a defense of the city. After a rest period in January 1945, the Division prepared to drive across the Roer River. The offensive was launched on 28 February 1945 and the 9th crossed the Roer to Rheinbach, sending patrols into Remagen. On 7 March 1945, elements of the 9th found that the Ludendorff Bridge was still standing. When German demolition charges failed to bring the bridge down, they crossed it, disarming and removing the remaining charges, which could have exploded at any time.

The Division exploited the bridgehead, moving south and east across the Lahn River toward Limburg, where thousands of Allied prisoners were liberated from Stalag XIIA. The Division drove on to Frankfurt and then turned to assist in the closing of the Ruhr Pocket. In April it continued east, encircling Leipzig and securing a line along the Mulde River. The Division was shifting south to Czechoslovakia when the war in Europe ended on 9 May 1945.[2]

All units of CCB/9 AIB of the 9th Armored Division were awarded the Presidential Unit Citation for their actions in taking and defending the Ludendorff Bridge during the Battle of Remagen in World War II.

Combat Command B, 9th Armored Division is cited for outstanding performance of duty in action from 28 February to 9 March 1945 in Germany. On 28 February, Combat Command B launched an attack from the vicinity of Soller and less than twenty-four hours later crossed the Erft River at Derkum, forcing the enemy into disorderly retreat, the unit headed south-east, reaching the heights west of Remagen on 7 March, where troops of the command could see the Ludendorff Bridge across the Rhine River with large numbers of German troops fleeing across it. At 1500 hours that day a prisoner was captured who revealed that the bridge was mined for demolition and was to be destroyed at 1600 hours. At 1535 hours, one column of Combat Company B reached the western approach to the bridge. The span was still intact. Although the destruction of the bridge was imminent, American troops unhesitatingly rushed across the structure in the face of intense enemy automatic weapons fire. An explosion rocked the bridge but did not destroy it. Engineers scrambled down the abutments, cutting wires leading to other demolition charges and disposing of hundreds of pounds of explosives by hurling them into the river. Bulldozer tanks, working under heavy artillery and small-arms fire, filled craters at the bridge approach to permit vehicular passage. Upon reaching the opposite bank, troops of Combat Command B fought gallantly and cleared the surrounding high ground. Although the strength of the span was unknown, tank units rumbled across the bridge after dark and lent their support to foot troops. Antiaircraft artillery men deployed their weapons so skillfully that in the ensuing days numerous enemy airplanes were destroyed in vain attempts to destroy the bridge. The superb skill, daring and esprit de corps displayed by each officer and man of Combat Command B, 9th Armored Division, in the dash to the Rhine, the capture of the Ludendorff Bridge, and the successful exploitation of this first bridgehead across Germany's formidable river barrier made an outstanding contribution to the defeat of the enemy.[3]

The 3rd Brigade, 1st Cavalry Division, was constituted on 29 August 1917 and organized as Headquarters, 3rd Brigade, 15th Cavalry Division in December. The 3rd Brigade demobilized on 15 July 1919 and reconstituted on 10 August 1921, within the newly constituted 1st Cavalry Division. Although never officially reorganized, the Brigade was inactive until its 15 October 1940 activation and redesignation and conversion to HHC, 9th Armored Division Trains, and deployed to Europe, receiving campaign-participation credit for operations in the Rhineland, the Ardennes-Alsace, and the Central Europe theatres of war, and awarded two Meritorious Unit Commendations, with embroidered streamers reading: Europe 1944 and Europe 1945. 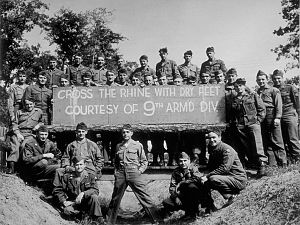 On October 13, 1945, the 9th Armored Division was inactivated in Newport News, Virginia. On that day, members of the division pose with the original sign they posted on the Ludendorff Bridge on March 8, 1945 after it was unexpectedly captured intact, opening a bridgehead into Germany three weeks earlier than planned.

After World War II, the unit returned state-side. The division was inactivated on October 13, 1945, and reactivated on 15 July 1963, when it was reassigned from the 9th Armored Division, and converted and redesignated as HHC, 3rd Brigade, 1st Cavalry Division (United States).