The autostrada A2 in Poland is a motorway which runs from west to east through central Poland, from the Polish-German border in Świecko/Frankfurt, where it connects to the German A12 autobahn, through Poznań and Łódź to Warsaw. The motorway is a part of the European route E30 connecting Berlin and Moscow. On 4 June 2014 the motorway received official name as Autostrada Wolności (Motorway of Freedom).[3]

According to current plans A2 will be gradually extended eastwards from Warsaw, all the way to the Polish-Belarusian border in Terespol/Brest, where it will connect to the M1 highway. This part of the motorway may be completed around 2020[4] depending on the availability of government funding. Its first 21 km segment serving as the bypass of Mińsk Mazowiecki opened in August 2012. 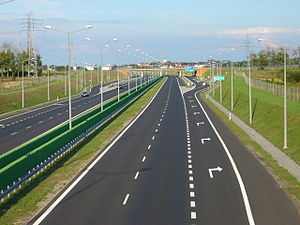 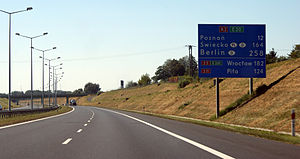 The first highway planned along part of this route was a Reichsautobahn initiated by Nazi Germany to connect Berlin with Poznań (Posen). The construction of this highway, accelerated after Poznań was incorporated into Germany following the Invasion of Poland in 1939, was interrupted by the war and never finished, but traces of its earthworks were clearly visible on satellite photographs for decades afterwards, especially between the border with Germany and Nowy Tomyśl. Most of these traces have now disappeared as the modern motorway was built largely following the same route. A short stretch of the uncompleted highway between the border and Rzepin was finished as a dual carriageway road after 1945, in effect forming an extension of the German A 12 highway (opened as a Reichsautobahn in the 1930s). Except for this stretch, the construction work was not continued in the decades after the war.

New plans to build the A2 motorway were seriously formulated in communist Poland in the 1970s, possibly with the goal of completing it in time for the Moscow Olympics in 1980. Because of the economic crisis which hit the country in the late 1970s and continued throughout the 1980s, only a 50 km (31 mi) section from Września to Konin was opened in the 1980s. Construction of another stretch (between Łódź and Warsaw) was started and then abandoned, leaving an interesting ruin informally named Olimpijka, which was in turn demolished around 2010 when building of the motorway resumed.

Intensive construction of the motorway started only in 2001 after the fall of communism in Poland in 1989. Out of the planned total length of 610 km (380 mi), 359 km (223 mi) have been completed. A section of about 150 km (93 mi) (Nowy Tomyśl – Poznań – Września – Konin) has been fully open since 2004. This section is a toll road, with the exception of a short stretch through Poznań which serves as that city's bypass (between the interchanges at Głuchowo and Kleszczewo). An additional 100 km (62 mi) section from Konin to Stryków near Łódź was opened on 26 July 2006. A short 4.8 km (3.0 mi) bypass of Stryków, consisting of a 2 km extension of the A2 and a provisional single carriageway section of future motorway A1, was opened in December 2008, to ease the heavy traffic in that town generated when the motorway reached it.

As of winter 2009/2010, the plan was to finish the whole section between the border with Germany and Warsaw by the Spring of 2012, giving the Polish capital its first motorway connection to the European motorway network in time for the Euro 2012 football championships. That ambitious goal was jeopardised due to various difficulties encountered in finalizing the construction contracts and the delays that resulted. The 90 km (56 mi) section from Stryków to Warsaw was to be built in a public-private partnership, but the negotiations between the government and private companies interested in participating collapsed in February 2009 due to disputes over financing terms.[5] It was then decided that this section of the motorway would be built using public funds alone. The new bidding process was started on 27 March,[citation needed] and the contracts for design and construction of the road were signed on 28 September.[6] The section had been divided into 5 parts and so construction work began in 2010. The contractors were required to have the motorway open to traffic in time for Euro 2012. This goal was an ambitious one and ultimately proved challenging, given the possibility of unexpected delays during construction[7] and the fact that the Chinese consortium abandoned the project less than a year later,[8] so that new contractors had to be selected to replace it. The goal was to have this motorway stretch provisionally opened to traffic in time for Euro 2012, even if it's not fully completed, with various restrictions such as a lower speed limit to ensure safety. For a while it was not clear whether even this limited goal would be reached, but the motorway opened to traffic in June 2012 after very intensive construction work in the final few months.

In November 2011 construction of the stretch to the German border from Nowy Tomyśl had been completed. The road was opened to public traffic on 1 December. Toll plazas on this stretch of the highway wasn't open until May 2012 so use of the western section of the A2 was free of charge until then.[9]

It is the A and C stretches of Łódź – Warsaw section which are not yet fully finished. While the road is open to traffic, one interchange (with road 50) is not yet open, and some overpasses for local roads are still not completed. The plan was to complete them all by the Fall of 2012. At the terminus of the motorway in Warsaw it forks into two express roads, S2 and S8

The eastern section from Warsaw to the border crossing with Belarus at Kukuryki near Brest (connecting with M1), about 170 km (110 mi) in length, is still in planning stages. The decision finalizing the route of this section was announced in December 2011[16] but actual construction on the whole segment will not begin in the near future, and the schedule depends on the availability of government funding. The exception is a short (21 km (13 mi) long) section of A2 forming the bypass of Mińsk Mazowiecki which has been under construction since August 2009. It opened to traffic in August 2012.[17] The construction of the section between Warsaw and Mińsk Mazowiecki is planned to take place between 2014 and 2020.[18] The remaining part to the border will be built some time after 2020, with the section between Mińsk Mazowiecki and Siedlce likely starting first because of higher traffic density. The construction of the remaining section east of Siedlce to the border with Belarus may begin considerably later, since the traffic density along this route is low and there is no urgent need for a high capacity road.

It is worth noting that the A2 motorway doesn't actually run through Warsaw, as the inhabitants of the districts through which it was to pass have successfully blocked its construction. This outcome was somewhat unusual, since the corridor for the motorway has been reserved by the city planners since the 1970s and kept free of construction. Instead, the traffic will be rerouted through two express roads (S2 and S8), of lower standard than the originally planned motorway. Paradoxically, one of these roads (S2) will run along the originally planned motorway corridor, so the residents who protested the construction will still end up with a busy road running through their districts, possibly even more inconvenient than the original road would have been. In the most affected area, the district of Ursynów, the express road will run in a tunnel, which will be built at considerable expense.