The AK-630 is a Soviet and Russian fully automatic naval close-in weapon system based on a six-barreled 30 mm rotary cannon. In "630", "6" means 6 barrels and "30" means 30 mm. It is mounted in an enclosed automatic turret and directed by radar and television detection and tracking. The system's primary purpose is defense against anti-ship missiles and other precision guided weapons. However it can also be employed against fixed or rotary wing aircraft, ships and other small craft, coastal targets, and floating mines. Once operational, this weapon system was rapidly adopted, with up to 8 units installed in every new Soviet warship (from mine-hunters to aircraft carriers), and hundreds produced in total.

The complete weapon system is called A-213-Vympel-A, which comprises the AK-630M Gun Mount, MR-123-02 Fire Control Radar System, and SP-521 Electrical-Optical Tracker. A single MR-123 radar system can simultaneously control two guns, either two 30 mm gun mounts, or two 57 mm gun mounts, or one 30 mm gun and one 57 mm gun. The radar system can engage aerial and surface targets at 4 km and 5 km respectively. The electro-optical system can detect a MiG-21–sized aerial target 7 km away, while torpedo boat–sized surface targets can be detected at a range of up to 70 km. Features include surveillance and tracking modes, high jamming immunity, laser range finder and TV optical sight. It is in operation on almost all Russian Navy ships from fast attack boats to the Kirov Battlecruiser.

The gun mount is fully automated, and can also be remotely controlled by an operator from either the control console or via a remotely mounted gunsight. It has a higher firing rate than both the Goalkeeper and Phalanx (Block 1 and older) CIWS models. They are often mounted in pairs, with as many as four pairs mounted on the larger ships, providing an effective point defence (last) layer. However, like all gun-based CIWS, they suffer from short engagement times and the need for multiple volleys to effectively eradicate a threat.

The AK-630 CIWS is composed of several members and sometimes the CADS-N-1 Kashtan's sub-systems and its derivatives are also included.

The design of the AK-630 CIWS was initiated in 1963, with the first operational prototype completed in 1964. Trials of the complete system, including radar and controls went on until 1976 when the system was accepted for service.

During the deployment of the system, numerous problems that did not appear in trials were exposed in its application, and some modification of the original AK-630 was made to correct these problems, and in 1979, the new system was named as AK-630M and was accepted into service.

A derivative of AK-630M was developed for light craft and this system was named as AK-306. Externally, the air-cooled AK-306 can be distinguished from the AK-630 by the absence of the water cooling system (a cylindrical jacket that surrounds the barrel cluster of the AK-630). Internally, the AK-306 (A-219) used electricity to power the automatics, instead of using the exhaust. This version also lacked radar control, being only optically guided, hence making it less of an anti-missile weapon and more of a surface-to-surface weapon, and the designation of the overall system is consequently changed from A-213-Vympel-A to A-219. The design started in 1974 and the system was accepted into service in 1980. When production was completed in 1986, 125 systems were in service.

In 1983, a decision was made to update the design and modify the AK-630 system to include a second gun mounted above the first, which provides 10,000 rpm in total. The AK-630M1-2 "Roy" was roughly the same size and weight allowing installation in existing AK-630 mounts. Though the system proved to be successful, the AK-630M1-2 Roy was not accepted for production due to the maturity of a combined missile and gun system, then designated the 3M87 Kortik, but later called Kashtan. The single example of AK-630M1-2 Roy remains installed on the Project 206.6 class missile boat # P-44.

In July 2007 at IMDS-2007, a modernized version of the AK-630M1-2 was showcased by OAO AK Tulamashzavod under the new name "Duet". Visually "Duet" differs from "Roy" in having a new mount with a stealthy low RCS design compared with the more traditional rounded AK-630 mounts.

In 2012 it was announced that the new Ivan Gren-class landing ship would be armed with the modified AK-630M-2 system.[11] 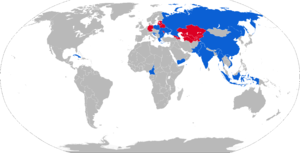