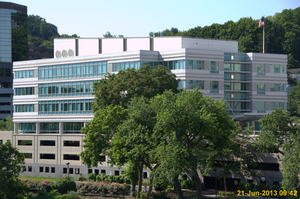 ASTM HQ in West Conshohocken, PA, as seen from a nearby bridge

A group of scientists and engineers, led by Charles Benjamin Dudley formed ASTM in 1898 to address the frequent rail breaks affecting the fast-growing railroad industry. The group developed a standard for the steel used to fabricate rails. Originally called the American Society for Testing and Materials, it changed its name to “ASTM International” in 2001. Now, ASTM International has offices in Belgium, Canada, China, Mexico and Washington, D.C. [3]

Membership in the organization is open to anyone with an interest in its activities.[4] Standards are developed within committees, and new committees are formed as needed, upon request of interested members. Membership in most committees is voluntary and is initiated by the member's own request, not by appointment nor by invitation. Members are classified as users, producers, consumers, and "general interest". The latter include academics and consultants. Users include industry users, who may be producers in the context of other technical committees, and end-users such as consumers. In order to meet the requirements of antitrust laws, producers must constitute less than 50% of every committee or subcommittee, and votes are limited to one per producer company. Because of these restrictions, there can be a substantial waiting-list of producers seeking organizational memberships on the more popular committees. Members can, however, participate without a formal vote and their input will be fully considered.

ASTM International has no role in requiring or enforcing compliance with its standards. The standards, however, may become mandatory when referenced by an external contract, corporation, or government.[8]