From Infogalactic: the planetary knowledge core
Jump to: navigation, search
File:Ghetto Vilinus.gif
Abba Kovner (standing in the center) with members of the FPO

Abba Kovner (March 14, 1918 – September 25, 1987) (Hebrew: אבא קובנר‎) was a Jewish Hebrew poet, writer and partisan leader. He became one of the great poets of modern Israel. He was a cousin of the Israeli Communist Party leader Meir Vilner.[1]

A quotation by Abba Kovner, displayed at the entrance to Diaspora Museum, Tel Aviv

Abba Kovner was born on March 14, 1918, in the Crimean Black Sea port city of Sevastopol. His parents were Rachel (Rosa) Taubman and Israel Kovner. At a young age he moved with his family to Vilnius, which at this time was part of Poland, where he grew up and was educated at the secondary Hebrew academy and the school of the arts. While pursuing his studies, he joined and became an active member in the socialist Zionist youth movement HaShomer HaTzair.

In June 1941, Nazi Germany attacked Vilnius, which was by that time in the Lithuanian SSR, after the illegal annexation/occupation of Lithuania (and the other Baltic States) into the Soviet Union July 21, 1940; Vilnius was given to Lithuania after Nazi Germany and the Soviet Union invaded and divided Poland. After occupation established the Vilna Ghetto. Kovner managed to escape with several friends to a Dominican convent headed by Anna Borkowska (Polish Righteous among the Nations) in the city's suburbs, but he soon returned to the ghetto.[2] He concluded that in order for any revolt to be successful, a Jewish resistance fighting force needed to be assembled.

At the start of 1942, Kovner released a manifesto in the Vilnius ghetto, twice repeating the phrase "Let us not go like lambs to the slaughter!" that later became famous.[3] The manifesto declared that Hitler had decided to kill all the Jews of Europe and that it was best to die fighting.[3] It was the first time such a notion had been declared in Europe—nobody at that time knew for certain of more than local killings—and many received it with skepticism;[3] however, for many this proclamation represented a turning point in an understanding of the situation and how to respond to it. The idea of resistance was disseminated from Vilnius by youth movement couriers, mainly women, to the ghettos of occupied Poland, occupied Belarus and of Lithuania.[4] Kovner, Yitzhak Wittenberg, and others formed the United Partisan Organization ("Fareynigte Partizaner Organizatsye", or FPO), one of the first armed underground organizations in the Jewish ghettos under Nazi occupation.[5] Kovner became its leader in July 1943, after Wittenberg was named by a tortured comrade and turned himself in to prevent an attack on the ghetto.[6] The FPO planned to fight the Germans when the end of the ghetto came, but circumstances and the opposition of the ghetto leaders made this impossible and they escaped to the forests.[7]

From September 1943 until the arrival of the Soviet army in July 1944, Kovner, along with his lieutenants Vitka Kempner and Rozka Korczak, commanded a partisan group called the Avengers ("Nokmim") in the forests near Vilna and engaged in sabotage and guerrilla attacks against the Germans and their local collaborators. The Avengers were one of four predominantly Jewish groups that operated under the command of the Soviet-led partisans.[8]

After the occupation of Vilnius by the Soviet Red Army in July 1944, Kovner became one of the founders of the Berihah movement, helping Jews escape Eastern Europe after the war.

At the end of the war, Kovner was one of the founders of a secret organization Nakam (revenge), also known as Dam Yisrael Noter ("the blood of Israel avenges", with the acronym DIN meaning "judgement")[9] whose purpose was to seek revenge for the Holocaust.[10][11][12] Two plans were formulated. Plan A was to kill a large number of German citizens by poisoning the water supplies of Hamburg, Frankfurt, Munich, and Nuremberg, Nakam intended to kill 6 million Germans.[13] Plan B was to kill SS prisoners held in Allied POW camps. In pursuit of Plan A, members of the group were infiltrated into water and sewage plants in several cities, while Kovner went to Palestine in search of a suitable poison.[9] Kovner discussed Nakam with Yishuv leaders, though it is not clear how much he told them and he doesn't seem to have received much support.[12] According to Kovner's own account, Chaim Weizmann approved the idea and put him in touch with the scientist Ernst Bergmann, who gave the job of preparing poison to Ephraim Katzir (later president of Israel) and his brother Aharon. Historians have expressed doubt over Weizmann's involvement, since he was overseas at the time Kovner specified.[12] The Katzir brothers confirmed that they gave poison to Kovner, but said that he only mentioned Plan B and they denied that Weizmann could be involved.[9] As Kovner and an accomplice were returning to Europe on a British ship, they threw the poison overboard when Kovner was arrested. He was imprisoned for a few months in Cairo and Plan A was abandoned.[11][12]

In April 1946, members of Nakam broke into a bakery used to supply bread for the Langwasser internment camp near Nuremberg, where many German POWs were being held. They coated many of the loaves with arsenic but were disturbed and fled before finishing their work. More than 2,200 of the German prisoners fell ill and 207 were hospitalized, but no deaths were reported.[12][14] 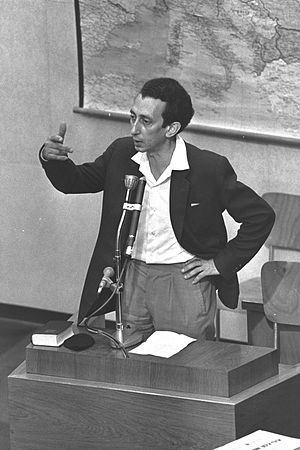 Abba Kovner testifying at the trial of Adolf Eichmann

Kovner joined the Haganah in December 1947, and soon after Israel declared independence in May 1948 he became a captain in the Givati Brigade of the IDF.[15] During the Israeli War of Independence he became known for his "battle pages", headed "Death to the invaders!", that contained news from the Egyptian front and essays designed to keep up morale.[16] However, the tone of the pages, which called for revenge for the Holocaust and referred to the Egyptian enemy as vipers and dogs, upset many Israeli political and military leaders.[17] His first battle page started a controversy that still continues today when it accused the Nitzanim garrison of cowardice for surrendering to an overwhelming Egyptian force.[18][19]

From 1946 to his death, Kovner was a resident of Kibbutz Ein HaHoresh.[20] He was active in Mapam as well as in HaShomer HaTzair, but never took on a formal political role.[21] He played a major part in the design and construction of several Holocaust museums, including the Diaspora Museum in Tel Aviv.[22] He died in 1987 (aged 69) of cancer that had started in his vocal cords, perhaps due to his lifelong heavy smoking.[23] Vitka Kempner, who married Kovner in 1946, survived him.

Kovner's book of poetry Ad Lo-Or, ("Until No-Light"), 1947, describes in lyric-dramatic narrative the struggle of the Resistance partisans in the swamps and forests of Eastern Europe. Ha-Mafteach Tzalal, ("The Key Drowned"), 1951, is also about this struggle. Pridah Me-ha-darom ("Departure from the South"), 1949, and Panim el Panim ("Face to Face"), 1953, continue the story with the Israeli War of Independence.

Kovner's story is the basis for the song "Six Million Germans / Nakam", by Daniel Kahn & The Painted Bird.

Kovner testified about his experiences during the war at the trial of Adolf Eichmann.