Amer was born in Astal, Samallot, in the Al Minya Governorate on 11 December 1919.[1] After finishing grade school, he attended the Cairo Military Academy and graduated in 1938.[1] He was commissioned into the Egyptian Army in 1939. 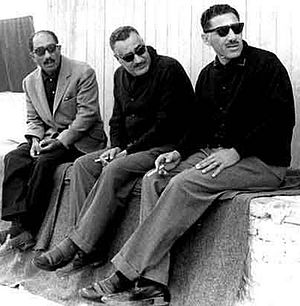 Amer served in the 1948 Arab–Israeli War, took part in the 1952 Revolution and commanded the Egyptian Army in the Suez Crisis, the North Yemen Civil War and the Six-Day War.

Amer played a leading role in the military coup that overthrew King Farouk in 1952 and which brought General Muhammad Naguib and Colonel Gamal Abdel Nasser to power. The following year, Amer was made Egypt's Chief-of-Staff, bypassing four military ranks. In 1956, Amer was appointed commander-in-chief of the joint military command established by Egypt and Syria. He also led Egyptian forces against both Israeli and allied British-French forces during the 1956 Suez war. After the fighting ended, Amer accused Nasser of provoking an unnecessary war and then blaming the military for the result.[2]

As Nasser's representative in Syria, Amer was detained by rebels during the 1961 Syrian coup d'état and sent back to Cairo.

In March 1964, Amer was made first vice-president to Nasser and deputy supreme commander, with the power to rule for 60 days if the president was incapacitated.[1] Amer's distinguished career came to a sudden end after Egypt's crushing defeat by Israel in the Six-Day War of June 1967. Many historians[who?] have stated that much the Egyptian military's failures in the 1967 war can be laid at the feet of Amer.[citation needed] This is because Amer's control of the Egyptian military establishment followed in line with leader Gamal Abdel-Nasser's general policy of presenting different government institutions as fiefdoms to those most loyal to him. In addition, the proxy war Egypt (with Soviet backing) fought against the Saudis, West, and Israelis in the North Yemen Civil War (1962–1970), Nasser supporting the Yemen Arab Republic against the Western and Saudi Arabian backed Royalists, is also viewed as being key to Egypt's defeat in the 1967 Middle East war; as nearly half of the Egypt's Western-trained officer-corps (mostly in Britain at Sandhurst) was in Yemen at the time of the initial Israeli attack on Egypt.[citation needed]

When Amer heard of the fall of Abu Ageila to Israel, he panicked and ordered all units in the Sinai to retreat. This order effectively meant the defeat of Egypt. Shortly after the Six Day War ended, he was relieved of all his duties and forced into early retirement.

In August that year, Amer, along with over 50 Egyptian military officers and two former ministers, was arrested for allegedly plotting a coup to overthrow Nasser. He was kept under house arrest at his villa in Giza.[3]

According to the official Egyptian position, Amer was rushed to hospital on 13 September 1967 in an attempt to save his life after he attempted suicide by swallowing "a large amount of poison pills" upon the arrival of Egyptian officers to question him. After surviving and being taken home the next day, he managed to evade his guards and swallow more pills he kept hidden under an adhesive plaster on his leg.[3] Later, Cairo radio announced his burial in his home village of Astal.

One version of the story holds that Amer was approached at his house on 14 September by high-ranking Egyptian officers and was given a choice to stand trial for treason, which would inevitably have ended with his conviction and execution, or die an honorable death by taking poison.[4] Amer chose the latter option and received a full military burial. Anwar Al Sadat, who later became President of Egypt, expressed his opinion that if he was in Amer's position, he would have done the same soon after the Six-Day War.[5]

In September 2012, Amer's family filed a case to investigate his death. They claimed that he was murdered.[4]