Aberdeen (Lakota: Ablíla[7]) is a city in and the county seat of Brown County, South Dakota, United States,[8] about 125 miles (201 km) northeast of Pierre. The city population was 26,091 at the 2010 census, making it the third largest city in the state. Aberdeen is the principal city of the Aberdeen Micropolitan Statistical Area, which includes all of Brown and Edmunds counties and has a population of 40,602 in 2010. Aberdeen is the home of Northern State University and Presentation College.

Before Aberdeen or Brown County was inhabited by European settlers, it was inhabited by the Sioux Indians from approximately 1700 to 1879. Europeans entered the region for business, founding fur trading posts during the 1820s; these trading posts operated until the mid-1830s. The first "settlers" of this region were the Arikara Indians, but they would later be joined by others.

The first group of Euro-American settlers to reach the area that is now Brown County was a party of four people, three horses, two mules, fifteen cattle, and two wagons. This group of settlers was later joined by another group the following spring, and eventually more settlers migrated toward this general area, currently known as Columbia, South Dakota. This town was established on June 15, 1879. The town was settled in 1880,[2] and incorporated in 1882.

Creation of the town 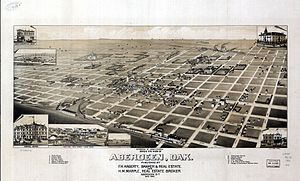 Aberdeen, like many towns of the Midwest, was built around the newly developing railroad systems. Aberdeen was first officially plotted as a town site on January 3, 1881, by Charles Prior, the superintendent of the Minneapolis office of the Chicago, Milwaukee, and St. Paul Railroad, or the Milwaukee Road for short, which was presided over by Alexander Mitchell. Mitchell, Charles Prior's boss, was responsible for the choice of town names, was born in Aberdeen, Scotland, after which the town of Aberdeen, South Dakota, was named.[2] Aberdeen was officially founded on July 6, 1881, the date of the first arrival of a Milwaukee Railroad train. Aberdeen then operated under a city charter granted by the Territorial Legislature in March 1883.[citation needed]

As Aberdeen grew, many businesses and buildings were constructed along Aberdeen's Main Street. However, this soon became a problem due to Aberdeen's periodic flooding, which led to it being referred to as "The Town in the Frog Pond". At first, this unique condition presented no problem to the newly constructed buildings because it had not rained very much but, when heavy rains fell, the Pond reappeared and flooded the basements of every building on Main Street, causing many business owners and home owners much turmoil. When this flooding happened, the city had one steam-powered pump that had to be used to dry out the entire area that had been flooded, which would take days, if not weeks – and more often than not, it would have rained again in this time period and caused even more flooding, even in the basements that had already been emptied of the water. When the water was gone from the basements, the city still had to deal with the mud that also resulted from the heavy rains.

The city decided in 1882 to build an artesian ditch to control the "Frog Pond" effects; the plan was later upgraded and developed into an artesian well in 1884 to combat the heavy rains and keep the basements from flooding. The artesian well was designed by the city engineers to prevent flooding and develop a water system. However, during the digging of the well, the water stream that was found underground was too powerful to be contained. The water came blasting out with violent force and had the entire Main Street submerged in up to four feet of water. The engineers realized the previous flaws of the artesian well plan and soon added a gate valve to the well to control the flow of water, giving Aberdeen its first working water supply.[citation needed]

Aberdeen had four different railroad companies with depots built in the newly developing town. With these four railroads intersecting here, Aberdeen soon became known as the "Hub City of the Dakotas". When looking down on Aberdeen from above, the railroad tracks converging in Aberdeen resembled the spokes of a wheel converging at a hub, hence the name "Hub City of the Dakotas". These four railroad companies are the reason why Aberdeen was able to grow and flourish as it did. The only railroad still running through Aberdeen is the Burlington Northern Santa Fe. 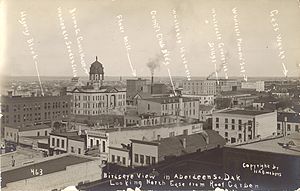 The National Oceanographic and Atmospheric Administration maintains a National Weather Service office in Aberdeen. Their area of responsibility includes northern and eastern South Dakota and two counties in west-central Minnesota.

Aberdeen is the county seat of Brown County. The original county seat was, however, Columbia. During the days of the railroad construction, plans were laid to bring the railroad through Columbia, then the county seat. When word of this spread, land in and around Columbia soared in price due to speculation. When time came for the railroads to purchase land, the increase in land prices led them to change their decision and instead to route the rail lines through Aberdeen. However, once Aberdeen became a town in 1881, there was a long-running controversy concerning which town would be the county seat, which continued until 1890, when it was declared by the newly formed South Dakota state constitution in 1889 that a majority vote could move the county seat if the county seat in question had originally been established by less than a majority vote. The result of the vote declared that Aberdeen would be the county seat once and for all, so all of the records were once again transferred to Aberdeen's courthouse; during the battle for county seat, the records had been moved from Columbia's courthouse to Aberdeen's courthouse (which was built from 1886 to 1887), and back again to Columbia's in what seemed to be a never-ending cycle of the transferring of records. This was typically done in the form of nighttime raids from the two towns.[citation needed]

There were 11,418 households of which 27.1% had children under the age of 18 living with them, 42.1% were married couples living together, 9.5% had a female householder with no husband present, 4.0% had a male householder with no wife present, and 44.4% were non-families. 36.9% of all households were made up of individuals and 13.1% had someone living alone who was 65 years of age or older. The average household size was 2.18 and the average family size was 2.86.

There were 10,553 households out of which 27.3% had children under the age of 18 living with them, 47.0% were married couples living together, 8.9% had a female householder with no husband present, and 41.4% were non-families. 34.9% of all households were made up of individuals and 13.6% had someone living alone who was 65 years of age or older. The average household size was 2.21 and the average family size was 2.86.

Super 8 Motels was founded in 1972 by Dennis Brown and Ron Rivett as a motel referral system, which was replaced with a franchise operation in 1973. The first Super 8, with 60 rooms, was opened in 1974 in Aberdeen and still operates today as the Super 8 Aberdeen East.

The South Dakota Film Festival established in 2007 is held annually in the fall. The festival has been host to Kevin Costner, Graham Greene, Adam Greenberg, CSA and many more stars of film and television. The festival's first feature film screened was Into The Wild, shot partially in SD. The festival is held at the historic Capitol Theatre.

The Northern State University Theater Department puts on plays during the school year.

The Village Bowl in Aberdeen is a modern bowling center with multiple lanes. Located at 1314 8th Ave. NW.[18]

Aberdeen has been home to three minor league baseball teams since 1920. The Aberdeen Boosters, a class D league team, played in 1920, the Aberdeen Grays, also a class D team, played from 1921 to 1923. The class C Aberdeen Pheasants from 1946 to 1971, and 1995 to 1997. The Pheasants were the affiliate of the former St. Louis Browns (current Baltimore Orioles). Aberdeen was a stop to the majors for such notable players as Don Larsen (perfect game in the World Series), Lou Piniella (AL rookie of the year with Kansas City Royals in 1969), and Jim Palmer, Baseball Hall of Fame pitcher for the Baltimore Orioles.

Aberdeen has multiple outdoor skating rinks and hockey rinks open to the public during winter months. Aberdeen is also home to the NAHL team, Aberdeen Wings.

Aberdeen has an All-women's Roller Derby league "A- Town Roller Girlz established 2011, also bringing Junior Roller Derby to the area. Men's league to follow in midst of interest in the dynamic of the sport.

Storybook Land is a park with attractions from several different children's storybooks. The park contains a castle, as well as a train that takes visitors through the park. There are two barns which contain petting zoos. Humpty Dumpty's Great Fall Roller Coaster was added to the park, summer 2015. Newly added is the Land of Oz, that features characters and attractions from L. Frank Baum's The Wonderful Wizard of Oz. Baum was a resident of Aberdeen in the 1880s, but left after the failure of the newspaper The Aberdeen Saturday Pioneer, where he wrote a column, Our Landlady.[19]

The Richmond Lake Recreation Area is used by all types of outdoors enthusiasts. Three separate areas in this park cater to the needs of campers, swimmers, naturalists, boaters and anglers. Campers stay in the South Unit, while the 200-acre (0.8 km2) Forest Drive Unit is a great place for wildlife viewing. The Boat Ramp Unit provides access to the more than 1,000-acre (4 km2) lake.

The park's extensive trail system features over 10 miles (16 km) of trails, including both accessible and interpretive trails. Hikers, bikers and horseback riders can observe the abundance of prairie plants and wildlife of the area up-close.

The park has multiple private and public boat ramps as well as an accessible fishing dock. Richmond Lake has a population of walleye, northern pike, bass, perch, crappie, bluegill, catfish, and bullheads within its waters. An entrance fee is required to gain access to the water and park itself.

The state senators from Brown County include Brock Greenfield and David Novstrup, and the state representatives included Lana Greefield, Burt Tulson, Dan Kaiser and Al Novstrup. They are all in office until December 2016[21]

In 2008, Gov Mike Rounds named Aberdeen as the South Dakota Community of the Year.

The Aberdeen School District's enrollment for the year 2011 – 2012 was approximately 3,945 students,[22] and the average class size was in the low to mid-twenties. Due to a projected increase in enrollment and the modernization of facilities, Simmons Middle School was completely remodeled with the demolition of the original 1929 building and the addition of a new classroom and cafeteria building which was completed in August 2008. The public school in Aberdeen is AA under the SDHSAA.

NSU was originally called the Institute of South Dakota before changing its name to Northern Normal and Industrial School in 1901. It changed its name again in 1939 when it became the Northern State Teachers College, and again in 1964, becoming Northern State College before finalizing at Northern State University in 1989.

NSU offers thirty-eight majors and forty-two minors as well as other degrees, and also has nine graduate degree areas for students wishing to further their education after achieving their first degree.

The mascot of NSU is the wolf named Thunder.[24]

Presentation College is a Catholic college on a 100-acre (0.40 km2) campus, and was founded in 1951.[2] Enrollment in fall 2014 was reported to be 735.[25] PC offers 26 programs between the main Aberdeen campus and the other campuses located throughout the state. Most of the degrees offered are in the health-care field. The student to teacher ratio is 12:1. Presentation's mascot is the Saint, giving it the nickname the Presentation College Saints.

The American News was founded as a weekly newspaper in 1885, by C.W. Starling and Paul Ware. It is now a daily newspaper.

The BNSF Railway conveys freight and grain through Aberdeen.

There are several Roman Catholic, Baptist, Lutheran, Methodist, and the Church of Jesus Christ of Latter-day Saints churches in the area, as well as one synagogue.