The Abgeordnetenhaus of Berlin is the state parliament (Landtag) of Berlin, Germany according to the city-state's constitution. In 1993 the parliament moved from Rathaus Schöneberg to its present house on Niederkirchnerstraße in Mitte, which until 1934 was the seat of the Prussian Landtag. The current president of the parliament is Ralf Wieland (SPD).

The Abgeordnetenhaus ("House of Representatives") parliament was established by the new constitution of West Berlin in 1951. It replaced the former city legislature called Stadtverordnetenversammlung (city deputies assembly), established by the Prussian Reforms in 1808 and re-established by Allied-initiated state elections of 1946.

Between 1951 and 1990 Abgeordnetenhaus was a parliament of restricted autonomy, since according to the Allied Control Council all its legislation and its elections, such as those of mayors and the senators (then still elected and not yet appointed by the mayor), were subject to Western-Allied confirmation or rejection. Abgeordnetenhaus continued to be the parliament of united Berlin.

The parliament of Berlin is chosen every five years in a general, free, secret and direct ballot according to the principle of proportional representation. It consists of at least 130 representatives, 78 chosen directly in the electoral districts of the Berlin boroughs, and 52 indirectly from land or district lists. If a party wins more constituency seats than its overall share of the vote, the overall size of the Abgeordnetenhaus increases because of these overhang mandates.

The current distribution of seats as of the 2011 election (compared to the 2006 election) is:

The Free Democratic Party lost all 13 seats due to the election threshold of 5%.

In January 2012 one CDU MP left the parliamentary group, retaining his mandate as an independent deputy. 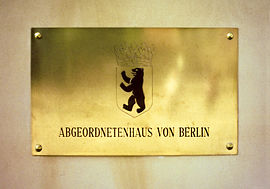 The consideration and passing of legislation is the most important task, including the government budget. In addition, the parliament chooses the Governing Mayor of Berlin, and checks the city's government, the Senate of Berlin.