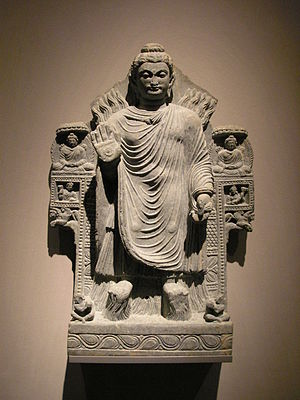 Abhijñā (Skt., Pali, abhiññā; Tib., mngon shes, མངོན་ཤེས་) has been translated generally as "knowing,"[1] "direct knowing"[2] and "direct knowledge"[3] or, at times more technically, as "higher knowledge"[1][4] and "supernormal knowledge."[1][5] In Buddhism, such knowing and knowledge is obtained through virtuous living and meditation. In terms of specifically enumerated knowledges, these include worldly extra-sensory abilities (such as seeing past and future lives) as well as the supramundane extinction of all mental intoxicants (āsava).

In Pali literature, abhiññā refers to both the direct apprehension of dhamma (translated below as "states" and "qualities") as well as to specialized super-normal capabilities.

In SN 45.159, the Buddha describes "higher knowledge" (abhiññā) as a corollary to the pursuit of the Noble Eightfold Path:[4]

What, monks, are the states to be comprehended with higher knowledge?
They are the five groups of clinging. Which five? The body-group, the feeling-group, the perception-group, the mental-formation group, the consciousness-group...

Such direct knowledge, according to the Buddha, is obscured by desire and passion (chanda-rāga):[6]

In the Pali Canon, the higher knowledges are often enumerated in a group of six or of three types of knowledge.

The six types of higher knowledges (chalabhiññā) are:

The attainment of these six higher powers is mentioned in a number of discourses, most famously the "Fruits of Contemplative Life Discourse" (Samaññaphala Sutta, DN 2).[8] The first five powers are obtained through meditative concentration (samadhi) while the sixth is obtained through insight (vipassana). The sixth type is the ultimate goal of Buddhism, which is the end of all suffering and destruction of all ignorance.[9] According to the Buddha, indulgence in the abhinjas needs to be avoided, as they can distract from the ultimate goal of Enlightenment.[5]

Similarly, the three knowledges or wisdoms (tevijja or tivijja) are:

The three knowledges are mentioned in numerous discourses including the Maha-Saccaka Sutta (MN 36) in which the Buddha describes obtaining each of these three knowledges on the first, second and third watches respectively of the night of his enlightenment. These forms of knowledge typically are listed as arising after the attainment of the fourth jhana.[11]

While such powers are considered to be indicative of spiritual progress, Buddhism cautions against their indulgence or exhibition since such could divert one from the true path of obtaining suffering's release.[9]

Parallels in other cultures

The first five types of Abhijna, are similar to the siddhis of yoga in Hinduism, mentioned in the Bhagavata Purana and by Patanjali:[9]