Abitur (from Latin abire "leave, go off") is a designation used in Germany, Finland, Lithuania, and Estonia for final exams that pupils take at the end of their secondary education, usually after twelve or thirteen years of schooling (see also for Germany Abitur after twelve years). Abitur is a matriculation examination and can be compared to A-Level exams or Matura.

The Zeugnis der Allgemeinen Hochschulreife, often referred to as Abiturzeugnis, issued after candidates have passed their final exams, is the document which contains their grades and formally enables them to attend college. This means it includes the functions of a school graduation certificate and a college entrance exam.[1]

The importance of the Abitur has grown beyond admission to the college, however, in that it has increasingly become a prerequisite for starting an apprenticeship in some professions (e.g., banking). Therefore, career opportunities for Hauptschule or Realschule graduates who do not have the Abitur have almost universally seen a downturn in recent years. More than just being a school leaving certificate, having an Abitur is also widely regarded as granting personal prestige.

The official term in Germany for this certificate of education is Allgemeine Hochschulreife; the contraction Abi is common in colloquial usage. In 2005, a total of 231,465 students passed the Abitur exam in Germany. The numbers have risen steadily and in 2012, a total of 305,172 students obtained the Allgemeine Hochschulreife.[2] This number, reflecting those who pass the traditional Abitur at their high school, is however, lower than the total count. Adding (for 2012) the 51,912 students who obtained the Hochschulreife at vocational training schools, that total number increases to 357,084. If those who obtain the Fachhochschulreife (144,399 in 2012) are also added, then the total of those who obtained the right to study at a university or a Fachhochschule is 501,483 (2012).[3] 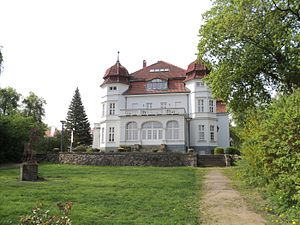 The German Abitur is typically attained at a Gymnasium, such as Internatsgymnasium Torgelow in Mecklenburg.

Up until the 18th century, every German university had its own entrance examination. In 1788 Prussia introduced the Abiturreglement, a law that—for the first time within Germany—established the Abitur as an official qualification. It was later also established in the other German states. In 1834 it became the only university entrance exam in Prussia, and it remained so in all states of Germany until 2004. Since then the German state of Hesse allows also students with Fachhochschulreife (see below) to study at the universities within that state.

The academic level of the Abitur is comparable to the International Baccalaureate, the GCE Advanced Level and the Advanced Placement tests — indeed, the study requirements for the International Baccalaureate differ little from the German exam requirements. It is the only school-leaving certificate in all states of Germany that allows the graduate (or Abiturient) to move directly to university. The other school leaving certificates, the Hauptschulabschluss and the Realschulabschluss, do not allow their holders to matriculate at a university. Those granted certificates of Hauptschulabschluss or Realschulabschluss can gain a specialized Fachabitur or an Abitur if they graduate from a Berufsschule and then attend Berufsoberschule or graduate from a Fachoberschule.

However, the Abitur is not the only path to university studies, as some universities set up their own entrance examinations. Students who successfully passed a "Begabtenprüfung" ("test of aptitude") are also eligible. Students from other countries who hold a high school leaving certificate that is not counted as being equivalent to the Abitur (such as the American high school diploma) and who do well enough on the ACT or SAT test, may also enter German universities. A person who does not hold the Abitur and did not take an aptitude test may still be admitted to university if he or she has completed at least the 10th grade and does well on an IQ-Test (see: Hochbegabtenstudium).

The official meaning behind the word Abitur in Germany is Zeugnis der allgemeinen Hochschulreife (often translated as General Qualification for University Entrance or Certificate for Overall Maturity for Higher Education). During the two final years of secondary school studies and in their final exams students receive grades on a scale of 15 (best) to 0 points (failed). These points are weighted and then added up and converted to the final grade on a scale from 1 (best) to 6 (failed). If a student receives 13,72 points or more on average in all of his/her courses and exams he/she will have earned the best possible final grade of 1.0.

The term Fachabitur was used in all of Western Germany for a variation of the Abitur up until the 1990s; the official term for this German qualification is fachgebundene Hochschulreife. This qualification includes only one foreign language (in most cases English). The Abitur, in contrast, usually requires two foreign languages. The Fachabitur also allows the graduate to start studying at a university. However, he is limited to a specified range of majors, depending on the specific subjects covered in his Fachabitur examinations. But the graduate is allowed to study for all majors at a Fachhochschule (University of Applied Sciences, in some ways comparable to polytechnics). Today, this school leaving certificate is called fachgebundenes Abitur ('restricted subject Abitur').

Now the term Fachabitur is used in most parts of Germany for the Fachhochschulreife (FHR). This school leaving certificate was introduced in West Germany in the 1970s together with the Fachhochschulen. It enables the graduate to start studying at a Fachhochschule, and in Hesse also at a university within that state. In the Gymnasiums of some states it is awarded in the year before the Abitur is reached. However, the normal way to obtain Fachhochschulreife is graduation from a German Fachoberschule, a vocational high school, an education entity also introduced in the 1970s.

The term Notabitur ('emergency Abitur') is used for a qualification which existed only during World War I and World War II. It was granted to male German Gymnasium (prep school) students who voluntarily enlisted for military service before graduation. The Notabitur during WWI included an examination, roughly equivalent to the Abitur exam. The WWII Notabitur, in contrast, was granted without an examination. After the war this was a major disadvantage for Germans with this qualification since, unlike its WWI counterpart, it was generally not recognised in West Germany and never recognised in East Germany. 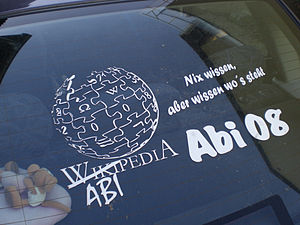 This German Abiturient wrote on his car: "Class of 2008, Not knowing anything, but knowing where it is written; Abipedia" (a portmanteau word compiled from Abitur and Wikipedia)

The equivalent graduation certificate in Austria, Poland and other countries of continental Europe is the Matura; while in England, Wales, Northern Ireland, Hong Kong, Singapore, and the West Indies, it is A-levels; in Scotland it is Higher Grade; in the Republic of Ireland it is the Leaving Certificate; in Greece and Cyprus it is the "apolytirion" (a kind of high school diploma); in Malta it is the Matriculation Certificate (MATSEC), in Hungary it is called "érettségi bizonyítvány" roughly equivalent with the German phrase Zeugnis der Allgemeinen Hochschulreife as it is originating from the Austrian-Hungarian Monarchy.

In India various states call this differently. Each Indian state has its own examination board, Some individual states have their own entrance test system. Passing the specified examination qualifies the student to enter in to undergraduate program in a university. For example, in the state of Andhra Pradesh this is known as Board of Intermediate Examination (BIE).

During the final examinations (Abiturprüfungen), students are tested in four or five subjects (at least one of which is oral). Procedures vary by state.

Although some tested subjects are chosen by the student, three areas must be covered:

Final exams are usually taken from March to May or June. Each written basic-level examination takes about three hours; advanced-level examinations take four-and-a-half hours, and written exams are in essay format. Oral examinations last about 20 minutes. Papers are graded by at least two teachers at the school. In some parts of Germany students may prepare a presentation, research paper or participate in a competition, and make take oral exams if the written exam is poor.

Before reunification, although Abitur exams were given locally in West Germany Bavaria conducted centralized exams (Zentralabitur) since 1854. After reunification most states of the former GDR continued centralized exams, and at the beginning of the 21st century many states adopted centralized exams. In 2013, all other states except Rheinland-Pfalz also introduced centralized written exams at least in the core subjects (German, mathematics and the first foreign language—usually English). The exams are structured as follows:

The Kultusministerkonferenz (KMK) of several states expanded the exams to scientific subjects and the social sciences. The physics and chemistry exams include an experiment which must be performed and analyzed.

Each semester of a subject studied in the final two years yields up to 15 points for a student, where advanced courses count double. The final examinations each count quadruple.

The exact scoring system depends on the Bundesland, in which one takes Abitur. Passing the Abitur in general requires a composite score of at least 50%. Students with a score below that minimum fail and do not receive an Abitur. There are some other conditions that the student also has to meet in order to receive the Abitur, e.g., taking mandatory courses in selected subject areas, and limits to the number of failing grades in core subjects. Finally, students often have the option of omitting some courses from their composite score if they have taken more courses than the minimum required.

The best possible grade of 1.0 can be achieved if the score ranges between 823 and 900 points; the fraction of students achieving this score is normally only around 0.3-2%[4] even among the already selective population of Abitur candidates. Around 12%-30% of Abitur candidates achieve grades between 1.0 and 1.9.[5]

Historically, very few people received their Abitur in Germany, because many attractive jobs did not require one. The number of persons holding the Abitur has steadily increased since the 1970s and younger jobholders are more likely to hold the Abitur than older ones. The percentage of students qualified for tertiary education is still lower than the OECD average.

Percentage of students graduating with Abitur or FHR (Studienberechtigtenquote):