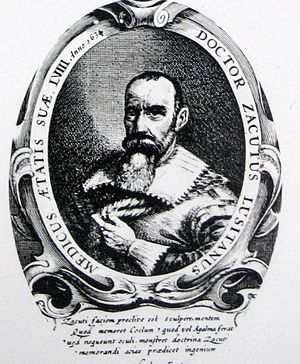 Zacuto was born in Salamanca, Spain in 1452.[1] He may have studied and taught astronomy at the University of Salamanca. He later was for a time teacher of astronomy at the universities of Zaragoza and then Cartagena.[2] He was versed in Jewish Law, and was rabbi of his community.

With the general expulsion of the Jews from Spain in 1492, Zacuto took refuge in Lisbon, Portugal. Already famous in academic circles, he was invited to court and nominated Royal Astronomer and Historian by King John II of Portugal, a position which he held until the early reign of Manuel I. He was consulted by the king on the possibility of a sea route to India, a project which he supported and encouraged. Zacuto would be one of the few who managed to flee Portugal during the forced conversions and prohibitions of departure that Manuel I enacted, in order to keep the Jews in Portugal as nominal Christians for foreign policy reasons (see Expulsion of the Jews from Portugal). He fled first to Tunis, and later moved to Jerusalem.[1] He died probably in 1515 in Jerusalem, however, other reports indicate his final home was the Hebrew community of Damascus and the death occurred in 1520.[1] However, in a similar vein to other giants of the Jewish faith, such as Saadia, Maimonides and the Vilna Gaon, he followed the extremely old Jewish custom (believed to have begun in Babylon) of being buried as close to Jerusalem as possible. Zacuto had established his wish to make his death pilgrimage at a Passover gathering. 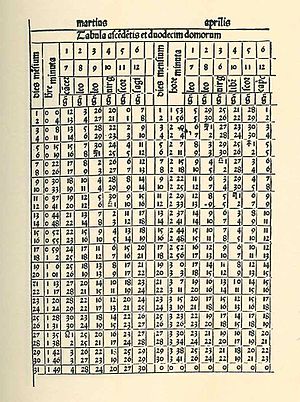 Zacuto developed a new type of astrolabe, specialized for practical determination of latitude while at sea, in contrast to earlier multipurpose devices intended for use ashore. Abraham Zacuto's principal claim to fame is the great astronomical treatise, written while he was in Salamanca, in Hebrew, with the title Ha-ḥibbur ha-gadol (Hebrew: החיבור הגדול‎) ("The Great Book"), begun around 1470 and completed in 1478.[3] It was composed of 65 detailed astronomical tables (ephemerides), with radix set in year 1473 and the meridian at Salamanca, charting the positions of the Sun, Moon and five planets.[3] The calculations were based on the Alfonsine Tables and the works of earlier astronomers (notably of the 14th-century Majorcan school). Zacuto set out the data in a simple "almanac" format, with the positions of a planet easily interpolated between entries, making it quite easy to use.[3]

The first Castilian translation was undertaken in 1481 by Juan de Salaya.[3] Zacuto's Portuguese disciple Joseph Vizinus (Mestre José Vizinho, the much-valued physician and advisor of John II of Portugal) adapted it into a Latin translation, under the title Tabulae tabularum Celestium motuum sive Almanach perpetuum ("Book of Tables on the celestial motions or the Perpetual Almanac"), immediately along with a new Castilian translation, and arranged for its publication in 1496 by Abraão de Ortas in Leiria, Portugal.[3] (one of the first books published in Portugal with a movable type printing press).

Zacuto's Almanach perpetuum (or Biur Luhoth) helped immediately revolutionize ocean navigation. Prior to the Almanach, navigators seeking to determine their position in the high seas had to correct for "compass error" (the deviation of the magnetic north from the true north) by recourse to the quadrant and the Pole Star. But this proved less useful as they approached the equator and the Pole Star began to disappear into the horizon. Zacuto's Almanach supplied the first accurate table of solar declination, allowing navigators to use the sun instead. As the quadrant could not be used to look directly at the sun, Portuguese navigators began using the astrolabe on board (an old land-based instrument to measure the height of the sun indirectly). Zacuto's tables in conjunction with the new metal nautical astrolabe allowed navigators to take accurate readings anywhere. Already in 1497, Vasco da Gama took Zacuto's tables and the astrolabe with him on the maiden trip to India.[4] It would continue to be used by Portuguese ships thereafter to reach far destinations such as Brazil and India.

Vasco da Gama and his crew underwent a thorough briefing and preparation by Zacuto, in addition to learning to use the new instruments which he had developed for their trip before setting on the voyage to India in 1496. Prior to that, Zacuto had again improved on the existing astronomical tables, mostly those prepared under King Alphonso X of Castille. Already Columbus had used Zacuto's tables. The story is that on one of his voyages, when attacked by the natives, Columbus noted that Zacuto had predicted an eclipse for that day, and used this information to threaten the natives and convince them that he could extinguish the Sun and Moon and deprive them of all light. Zacuto's work thus saved the Admiral's life and that of his crew.[5]

Abraham Zacuto might have an uncredited appearance in Luís de Camões's 1572 epic poem, The Lusiad, as the unnamed "old man of Restelo beach", a Cassandra-like character that surges forward just before Vasco da Gama's departure to chide the vanity of fame and warn of the travails that await him (Canto IV, v.94-111). This may be Camões' poetic interpretation of an alleged meeting (reported in Gaspar Correia) between Vasco da Gama and the older Abraham Zacuto at a monastery by Belém beach, just before his fleet's departure, in which Zacuto reportedly gave Gama some final navigational tips and warned him of dangers to avoid.[6]

In 1504, while in Tunisia, Abraham Zacuto wrote a history of the Jewish people, Sefer yuḥasin (Hebrew: ספר יוחסין‎), since the Creation of the World until 1500, and several other astronomical/astrological treatises. The History was greatly respected and was reprinted in Cracow in 1581, at Amsterdam in 1717, and at Königsberg in 1857, while a complete edition was published by Filipowski in London at 1857. Annotations in Hebrew to chapter five of "Sefer Hayuhasin", were published by Yoel Lieberman in 2001 in a masters thesis called "A Record of Medieval Sages In Sefer Yuchasin of Rabbi Abraham Zacut". The book was translated into English and published in 2005 by the Zacuto foundation founded by Dr. Vladimir Rozenblit, a 20th generation direct descendant of Zacuto.