Abram Fedorovich (or Fyodorovich) Ioffe (Russian: Абра́м Фёдорович Ио́ффе; 29 October [O.S. 17 October] 1880 – 14 October 1960) was a prominent Russian/Soviet physicist. He received the Stalin Prize (1942), the Lenin Prize (1960) (posthumously), and the Hero of Socialist Labor (1955). Ioffe was an expert in electromagnetism, radiology, crystals, high-impact physics, thermoelectricity and photoelectricity. He established research laboratories for radioactivity, superconductivity, and nuclear physics, many of which became independent institutes. 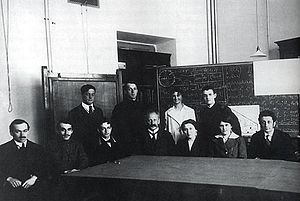 Ioffe was born into a middle-class Jewish family in small town of Romny, Russian Empire (now in Sumy region, Ukraine). After graduating from Saint Petersburg State Institute of Technology in 1902, he spent two years as an assistant to Wilhelm Roentgen in his Munich laboratory. Ioffe completed his Ph.D. at Munich University in 1905.

After 1906, Ioffe worked in the Saint Petersburg (from 1924 Leningrad) Polytechnical Institute where he eventually became a professor. In 1911 he (independently of Millikan) determined the electron charge, using charged microparticles of metals balanced in electric field against gravity (published in 1913).[1][2] In 1911 Ioffe converted to Lutheranism and married a non-Jewish woman.[3] In 1913 he attained the title of Magister of Philosophy,[4] in 1915 – Doctor of Physics. In 1918 he became a head of Physics and Technology division in State Institute of Roentgenology and Radiology. This division became the Leningrad Physico-Technical Institute (LPTI) in 1917.

In the early 1930s, there was a critical need in the Air Defense Forces of the Red Army for means of detecting invading aircraft. A number of research institutes were involved with radiolokatory (radio-location) techniques. The Russian Academy of Sciences called a conference in January 1934 to assess this technology. Ioffe organized this conference, then published a journal report, disclosing to researchers throughout the world the science and technology that would ultimately be called radar.[5]

When the Soviet atomic bomb project began in 1942, Ioffe was asked to lead the technical effort, but refused the job on the grounds that he was too old. He saw great promise in the young Igor Kurchatov, and placed him in charge of the first nuclear laboratory. During Joseph Stalin's campaign against the so-called "rootless cosmopolitans" (Jews), in 1950 Ioffe was made redundant from his position of the Director of LPTI and from the Board of Directors. In 1952–1954 he headed the Laboratory of Semiconductors of Academy of Sciences of the USSR, which in 1954 was reorganized into Institute of Semiconductors. Following Ioffe's death, in 1960 the LPTI was renamed the Ioffe Physico-Technical Institute and remains one of Russia's leading research centers.