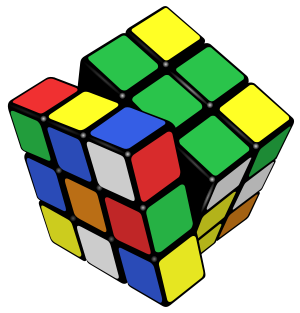 The permutations of Rubik's Cube form a group, a fundamental concept within abstract algebra.

In algebra, which is a broad division of mathematics, abstract algebra (occasionally called modern algebra) is the study of algebraic structures. Algebraic structures include groups, rings, fields, modules, vector spaces, lattices, and algebras. The term abstract algebra was coined in the early 20th century to distinguish this area of study from the other parts of algebra.

As in other parts of mathematics, concrete problems and examples have played important roles in the development of abstract algebra. Through the end of the nineteenth century, many -- perhaps most -- of these problems were in some way related to the theory of algebraic equations. Major themes include:

Numerous textbooks in abstract algebra start with axiomatic definitions of various algebraic structures and then proceed to establish their properties. This creates a false impression that in algebra axioms had come first and then served as a motivation and as a basis of further study. The true order of historical development was almost exactly the opposite. For example, the hypercomplex numbers of the nineteenth century had kinematic and physical motivations but challenged comprehension. Most theories that are now recognized as parts of algebra started as collections of disparate facts from various branches of mathematics, acquired a common theme that served as a core around which various results were grouped, and finally became unified on a basis of a common set of concepts. An archetypical example of this progressive synthesis can be seen in the history of group theory.

There were several threads in the early development of group theory, in modern language loosely corresponding to number theory, theory of equations, and geometry.

Leonhard Euler considered algebraic operations on numbers modulo an integer, modular arithmetic, in his generalization of Fermat's little theorem. These investigations were taken much further by Carl Friedrich Gauss, who considered the structure of multiplicative groups of residues mod n and established many properties of cyclic and more general abelian groups that arise in this way. In his investigations of composition of binary quadratic forms, Gauss explicitly stated the associative law for the composition of forms, but like Euler before him, he seems to have been more interested in concrete results than in general theory. In 1870, Leopold Kronecker gave a definition of an abelian group in the context of ideal class groups of a number field, generalizing Gauss's work; but it appears he did not tie his definition with previous work on groups, particularly permutation groups. In 1882, considering the same question, Heinrich M. Weber realized the connection and gave a similar definition that involved the cancellation property but omitted the existence of the inverse element, which was sufficient in his context (finite groups).

Permutations were studied by Joseph-Louis Lagrange in his 1770 paper Réflexions sur la résolution algébrique des équations (Thoughts on the algebraic solution of equations) devoted to solutions of algebraic equations, in which he introduced Lagrange resolvents. Lagrange's goal was to understand why equations of third and fourth degree admit formulae for solutions, and he identified as key objects permutations of the roots. An important novel step taken by Lagrange in this paper was the abstract view of the roots, i.e. as symbols and not as numbers. However, he did not consider composition of permutations. Serendipitously, the first edition of Edward Waring's Meditationes Algebraicae (Meditations on Algebra) appeared in the same year, with an expanded version published in 1782. Waring proved the main theorem on symmetric functions, and specially considered the relation between the roots of a quartic equation and its resolvent cubic. Mémoire sur la résolution des équations (Memoire on the Solving of Equations) of Alexandre Vandermonde (1771) developed the theory of symmetric functions from a slightly different angle, but like Lagrange, with the goal of understanding solvability of algebraic equations.

Kronecker claimed in 1888 that the study of modern algebra began with this first paper of Vandermonde. Cauchy states quite clearly that Vandermonde had priority over Lagrange for this remarkable idea, which eventually led to the study of group theory.[1]

Paolo Ruffini was the first person to develop the theory of permutation groups, and like his predecessors, also in the context of solving algebraic equations. His goal was to establish the impossibility of an algebraic solution to a general algebraic equation of degree greater than four. En route to this goal he introduced the notion of the order of an element of a group, conjugacy, the cycle decomposition of elements of permutation groups and the notions of primitive and imprimitive and proved some important theorems relating these concepts, such as

if G is a subgroup of S5 whose order is divisible by 5 then G contains an element of order 5.

Note, however, that he got by without formalizing the concept of a group, or even of a permutation group. The next step was taken by Évariste Galois in 1832, although his work remained unpublished until 1846, when he considered for the first time what is now called the closure property of a group of permutations, which he expressed as

The abstract notion of a group appeared for the first time in Arthur Cayley's papers in 1854. Cayley realized that a group need not be a permutation group (or even finite), and may instead consist of matrices, whose algebraic properties, such as multiplication and inverses, he systematically investigated in succeeding years. Much later Cayley would revisit the question whether abstract groups were more general than permutation groups, and establish that, in fact, any group is isomorphic to a group of permutations.

The end of the 19th and the beginning of the 20th century saw a tremendous shift in the methodology of mathematics. Abstract algebra emerged around the start of the 20th century, under the name modern algebra. Its study was part of the drive for more intellectual rigor in mathematics. Initially, the assumptions in classical algebra, on which the whole of mathematics (and major parts of the natural sciences) depend, took the form of axiomatic systems. No longer satisfied with establishing properties of concrete objects, mathematicians started to turn their attention to general theory. Formal definitions of certain algebraic structures began to emerge in the 19th century. For example, results about various groups of permutations came to be seen as instances of general theorems that concern a general notion of an abstract group. Questions of structure and classification of various mathematical objects came to forefront.

These processes were occurring throughout all of mathematics, but became especially pronounced in algebra. Formal definition through primitive operations and axioms were proposed for many basic algebraic structures, such as groups, rings, and fields. Hence such things as group theory and ring theory took their places in pure mathematics. The algebraic investigations of general fields by Ernst Steinitz and of commutative and then general rings by David Hilbert, Emil Artin and Emmy Noether, building up on the work of Ernst Kummer, Leopold Kronecker and Richard Dedekind, who had considered ideals in commutative rings, and of Georg Frobenius and Issai Schur, concerning representation theory of groups, came to define abstract algebra. These developments of the last quarter of the 19th century and the first quarter of 20th century were systematically exposed in Bartel van der Waerden's Moderne algebra, the two-volume monograph published in 1930–1931 that forever changed for the mathematical world the meaning of the word algebra from the theory of equations to the theory of algebraic structures.

By abstracting away various amounts of detail, mathematicians have created theories of various algebraic structures that apply to many objects. For instance, almost all systems studied are sets, to which the theorems of set theory apply. Those sets that have a certain binary operation defined on them form magmas, to which the concepts concerning magmas, as well those concerning sets, apply. We can add additional constraints on the algebraic structure, such as associativity (to form semigroups); identity, and inverses (to form groups); and other more complex structures. With additional structure, more theorems could be proved, but the generality is reduced. The "hierarchy" of algebraic objects (in terms of generality) creates a hierarchy of the corresponding theories: for instance, the theorems of group theory apply to rings (algebraic objects that have two binary operations with certain axioms) since a ring is a group over one of its operations. Mathematicians choose a balance between the amount of generality and the richness of the theory.

Examples of algebraic structures with a single binary operation are:

Because of its generality, abstract algebra is used in many fields of mathematics and science. For instance, algebraic topology uses algebraic objects to study topologies. The Poincaré conjecture, proved in 2006, asserts that the fundamental group of a manifold, which encodes information about connectedness, can be used to determine whether a manifold is a sphere or not. Algebraic number theory studies various number rings that generalize the set of integers. Using tools of algebraic number theory, Andrew Wiles proved Fermat's Last Theorem.

In physics, groups are used to represent symmetry operations, and the usage of group theory could simplify differential equations. In gauge theory, the requirement of local symmetry can be used to deduce the equations describing a system. The groups that describe those symmetries are Lie groups, and the study of Lie groups and Lie algebras reveals much about the physical system; for instance, the number of force carriers in a theory is equal to dimension of the Lie algebra, and these bosons interact with the force they mediate if the Lie algebra is nonabelian.[2]