For the trees used in linguistics, see Concrete syntax tree. 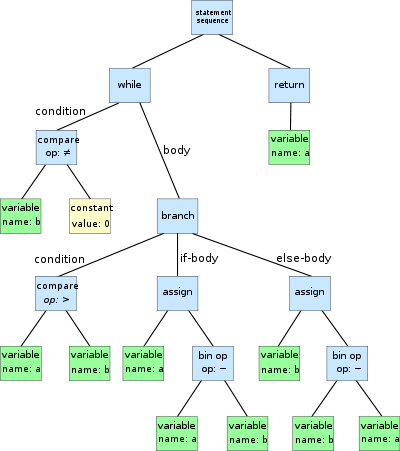 An abstract syntax tree for the following code for the Euclidean algorithm:

In computer science, an abstract syntax tree (AST), or just syntax tree, is a tree representation of the abstract syntactic structure of source code written in a programming language. Each node of the tree denotes a construct occurring in the source code. The syntax is "abstract" in not representing every detail appearing in the real syntax. For instance, grouping parentheses are implicit in the tree structure, and a syntactic construct like an if-condition-then expression may be denoted by means of a single node with three branches.

This distinguishes abstract syntax trees from concrete syntax trees, traditionally designated parse trees, which are often[citation needed] built by a parser during the source code translation and compiling process. Once built, additional information is added to the AST by means of subsequent processing, e.g., contextual analysis.

Abstract syntax trees are data structures widely used in compilers, due to their property of representing the structure of program code. An AST is usually the result of the syntax analysis phase of a compiler. It often serves as an intermediate representation of the program through several stages that the compiler requires, and has a strong impact on the final output of the compiler.

Being the product of the syntax analysis phase of a compiler, the AST has several properties that are invaluable to the further steps of the compilation process.

ASTs are needed because of the inherent nature of programming languages and their documentation. Languages are often ambiguous by nature. In order to avoid this ambiguity, programming languages are often specified as a context free grammar (CFG). However, there are often aspects of programming languages that a CFG can't express, but are part of the language and are documented in its specification. These are details that require a context to determine their validity and behaviour. For example, if a language allows new types to be declared, a CFG cannot predict the names of such types nor the way in which they should be used. Even if a language has a predefined set of types, enforcing proper usage usually requires some context. Another example is duck typing, where the type of an element can change depending on context. Operator overloading is yet another case where correct usage and final function are determined based on the context. Java provides an excellent example, where the '+' operator is both numerical addition and concatenation of strings.

Although there are other data structures involved in the inner workings of a compiler, the AST performs a unique function. During the first stage, the syntax analysis stage, a compiler produces a parse tree. This parse tree can be used to perform almost all functions of a compiler by means of syntax-directed translation. Although this method can lead to a more efficient compiler, it goes against the software engineering principles of writing and maintaining programs[citation needed]. Another advantage that the AST has over a parse tree is the size, particularly the smaller height of the AST and the smaller number of elements.

Core requirements include the following:

These requirements can be used to design the data structure for the AST.

Some operations will always require two elements, such as the two terms for addition. However, some language constructs require an arbitrarily large number of children, such as argument lists passed to programs from the command shell. As a result, an AST used to represent code written in such a language has to also be flexible enough to allow for quick addition of an unknown quantity of children.

Another major design requirement for an AST is that it should be possible to unparse an AST into source code form.[why?] The source code produced should be sufficiently similar to the original in appearance and identical in execution, upon recompilation.

Due to the complexity of the requirements for an AST and the overall complexity of a compiler, it is beneficial to apply sound software development principles. One of these is to use proven design patterns to enhance modularity and ease of development.

Different operations don't necessarily have different types, so it is important to have a sound node class hierarchy. This is crucial in the creation and the modification of the AST as the compiler progresses.

Because the compiler traverses the tree several times to determine syntactic correctness, it is important to make traversing the tree a simple operation. The compiler executes a specific set of operations, depending on the type of each node, upon reaching it, so it often makes sense to use the visitor pattern.