Abuja (/əˈbuːdʒə/)[4] is the capital city of Nigeria. It is located in the centre of Nigeria, within the Federal Capital Territory (FCT). Abuja is a planned city,[5] and was built mainly in the 1980s. It officially became Nigeria's capital on 12 December 1991, replacing Lagos, though the latter remains the country's most populous city. Abuja's geography is defined by Aso Rock, a 400-metre monolith left by water erosion. The Presidential Complex, National Assembly, Supreme Court and much of the city extend to the south of the rock. Zuma Rock, a 792-metre monolith, lies just north of the city on the road to Kaduna State.

At the 2006 census, the city of Abuja had a population of 776,298,[6] making it one of the ten most populous cities in Nigeria. According to the United Nations, Abuja grew at the rate of 139.7% between 2000 and 2010, making it the fastest growing city in the world.[7] As of 2015, the city is still experiencing an annual growth of at least 35%.[8] Abuja has witnessed a huge influx of people into the city; the growth has led to the emergence of satellite towns such as Karu Urban Area, Suleja, Gwagwalada, Lugbe, Kuje and smaller settlements to which the planned city is sprawling. The unofficial metropolitan area of Abuja has a population of well over three million and comprises the fourth largest metropolitan area in Nigeria, surpassed only by Lagos, Kano and Ibadan. 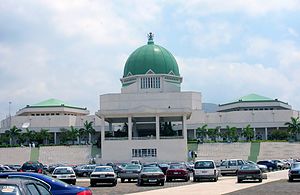 In light of the ethnic and religious divisions of Nigeria, plans had been devised since Nigeria's independence to have its capital in a place deemed neutral to all parties. The location was eventually designated in the centre of the country in the early 1970s as it signified neutrality and national unity. Another impetus for Abuja came because of Lagos' population boom that made that city overcrowded and conditions squalid. The logic used was similar to the way Brazil planned its capital, Brasília. Construction broke ground and was dedicated in the late 1970s but, due to economic and political instability, the initial stages of the city were not complete until the late 1980s.

The master plan for Abuja and the Federal Capital Territory (FCT) was developed by International Planning Associates (IPA), a consortium of three American firms: Planning Research Corporation; Wallace, McHarg, Roberts and Todd;[10] and Archisystems, a division of the Hughes Organization. The master plan for Abuja defined the general structure and major design elements of the city that are visible in its current form. More detailed design of the central areas of the capital, particularly its monumental core, was accomplished by Kenzo Tange, a renowned Japanese architect, with his team of city planners at Kenzo Tange and Urtec company.

Most countries relocated their embassies to Abuja, and many maintain their former embassies as consulates in Lagos, the commercial capital of Nigeria. Abuja is the headquarters of the Economic Community of West African States (ECOWAS) and the regional headquarters of OPEC. Abuja and the FCT have experienced huge population growth; it has been reported that some areas around Abuja have been growing at 20% to 30% per year.[11] Squatter settlements and towns have spread rapidly in and outside the city limits.[5][12] Tens of thousands of people have been evicted since former FCT minister Nasir Ahmad el-Rufai started a demolition campaign in 2003.[13]

The FCT's ministers have been as follows:

The Phase 1 area of the city is divided into ten districts known as cadastral zones:[15]

There are also sixteen districts in Phase 2.[15] 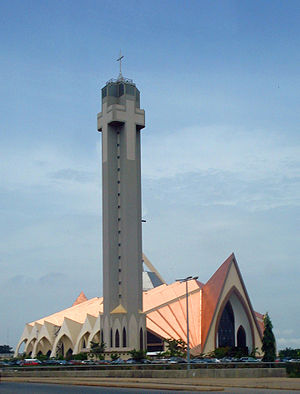 Abuja's Central District, also called Central Area, spans from the foot of Aso Rock, across the Three Arms Zone, to the southern base of the inner ring road. It is like the city's spinal cord, dividing it into the northern sector with Maitama and Wuse, and the southern sector with Garki and Asokoro. While each district has its own clearly demarcated commercial and residential sectors, the Central District is the city's principal Business Zone, where practically all parastatals and multinational corporations have their offices. An attractive area in the Central District is the region known as the Three Arms Zone, so called because it houses the administrative offices of the executive, legislative and judicial arms of the federal government. A few of the other sites worth seeing in the area are the federal secretariats alongside Shehu Shagari Way, Aso Hill, the Abuja Plant Nursery, Eagle Square (which has important historic significance, as it was in this grounds that the present democratic dispensation had its origin on 29 May 1999) and the Tomb of the Unknown Soldier across the road facing it. The National Mosque and National Church of Nigeria are opposite each other on either side of Independence Avenue.[16] A well-known government office is the Ministry of Defense, colloquially nicknamed "Ship House".[17]

The Garki District is the area in the southwest corner of the city, having the Central District to the north and the Asokoro District to the east. The district is subdivided into units called "Areas". Garki uses a distinctive naming convention of "Area" to refer to parts of Garki. These are designated as Areas 1 to 11. Garki II is used to differentiate the area from Garki Area 2. Visitors may find this system confusing.

Garki is presently the principal business district of Abuja. Numerous buildings of interest are in this area. Some of them include the General Post Office, Abuja International Conference Centre along the busy Herbert Maculay Way, Nicon Luxury Hotel (formally known as Abuja Sofitel Hotel and Le Meridian), Agura Hotel and Old Federal Secretariat Complex Buildings (Area 1). A new five-star hotel, Hawthorn Suites Abuja, is in Garki.

Area 2 is mainly used for residential purposes, although a zoological garden as well as Garki Shopping Centre are in Area 2. Several banks and other commercial offices are located along Moshood Abiola Way in Area 7. The headquarters of the Nigerian Armed Forces – Army, Airforce and Navy – are all in the Garki District.

The tallest building in this district is the Radio House, which houses the Federal Ministry of Information and Communications, and the Federal Radio Corporation of Nigeria (FRCN). The Nigerian Television Authority (NTA) stations and corporate headquarters are based in Garki. The Federal Capital Development Authority (FCDA) which oversees and runs the Administration of the Federal Capital Territory has its offices in Garki.

Wuse District is the northwestern part of the city, with the Maitama District to its north and the Central District to its south. The District is numbered Zones 1–8. The Wuse Market is Abuja's principal market (Zone 5). The second most important post office in the city is here. This district houses the Sheraton Hotel and Towers (Zone 4), Ibro International hotel, the Foreign Affairs Ministry Headquarters (Zone 3) and Nigerian Customs Services Headquarters, Federal Civil Service Commission (Zone 3), Federal Road Safety Commission (FRSC), National Agency for Food and Drugs Administration (NAFDAC) (Zone 7), Wuse General Hospital, and the Nigerian Tourism Development Corporation. Just as Garki District has Garki II, Wuse has Wuse II. This is distinct from Wuse Zone 2.

Maitama District is to the north of the city, with the Wuse and Central Districts lying to its southwest and southeast respectively. This area is home to the top bracket sections of society and business, and has the reputation of being very exclusive and very expensive. Interesting buildings include the Transcorp Hilton Hotel, Nigerian Communications Commission Headquarters (NCC), National Universities Commission (NUC), Soil Conservation Complex, and Independent National Electoral Commission (INEC). The British High Commission is located along Aguiyi Ironsi Way, in Maitama. Also, the Maitama District Hospital is another notable building in Maitama. Maitama District is home to many of the European and Asian embassies.

Asokoro District, the doyen of the districts, houses all of the state's lodges/guest houses. The ECOWAS secretariat is a focal point of interest. Asokoro is to the east of Garki district and south of Central district. It is one of the most exclusive districts of Abuja and houses virtually all of the federal cabinet ministers; in addition, the Presidential Palace (commonly referred to as the Aso Rock) is in Asokoro district. By virtue of this fact, Asokoro is the most secure area of the city.

Gwarinpa is the last district in the Abuja Municipal Area Council. It is a 20-kilometer drive from the central district and contains the largest single housing estate in Nigeria, the Gwarinpa Housing Estate. The estate was built by the administration of General Sani Abacha and is the largest of its kind in Africa. It provides residence for the majority of the civil servants in federal ministries and government parastatals. The ECOWAS Court has an official quarters for the President and Members of the Court in Gwarinpa.

The American International School of Abuja is located in the Durumi District.[20][21]

Abuja under Köppen climate classification features a tropical wet and dry climate. The FCT experiences three weather conditions annually. This includes a warm, humid rainy season and a blistering dry season. In between the two, there is a brief interlude of harmattan occasioned by the northeast trade wind, with the main feature of dust haze and dryness.

Rainfall in the FCT reflects the territory's location on the windward side of the Jos Plateau and the zone of rising air masses with the city receiving frequent rainfall during the rainy season from March to November every year.[22]

The FCT falls within the Guinean forest-savanna mosaic zone of the West African sub-region. Patches of rain forest, however, occur in the Gwagwa plains, especially in the rugged terrain to the south southeastern parts of the territory, where a landscape of gullies and rough terrain is found. These areas of the Federal Capital Territory (FCT) form one of the few surviving occurrences of the mature forest vegetation in Nigeria.

The Abuja skyline is made up of mostly mid-range and a few tall buildings. Only recently have tall buildings begun to appear. Most of the buildings are modern, reflecting that it is a new city.

Plans have been made to build skyscrapers such as the Millennium Tower which is currently under construction. When finished, this structure will loom 170 meters above the city. The tower will be part of a huge cultural development complex called the Nigeria National Complex including the Nigeria Cultural Centre, a 120.000 m2 structure dedicated to the art and culture of Nigeria. The Cultural Centre and the Millennium Tower have been designed by the Italian architect Manfredi Nicoletti.

Landmarks include the Millennium Tower (which is currently under construction), the Central Bank of Nigeria headquarters, the Nigerian Presidential Complex, the Ship House, the National Stadium, National Mosque the Christian Centre, the Castle of Law, Aso Rock and Zuma Rock

Nnamdi Azikiwe International Airport is the main airport serving Abuja and the surrounding capital region. It was named after Nigeria's first president, Dr. Nnamdi Azikiwe. The airport has international and domestic terminals.

Abuja is home to several parks and green areas with the largest one being Millennium Park. Millennium Park was designed by world-renowned architect Manfredi Nicoletti and was officially opened by the United Kingdom's Elizabeth II in December 2003. Another open area park is located in Lifecamp Gwarimpa; near the residence of the Minister of the Federal Capital Territory. The park is located on a slightly raised hilltop which contains sport facilities like Basketball and Badminton courts another park is the city park, it is located in wuse 2 and is home to numerous outdoor and indoor attractions such as a 4D cinema, astro-turf, lawn tennis court, paintball arena and a variety of restaurants.

Abuja has a variety of informal spaces known as "Bush Bars" that usually, though not always, includes a covered area with tables and chairs where people can sit and have drinks (alcoholic and non-alcoholic) and sometimes there are snacks such as suya, grilled catfish, pounded yam, egusi soup and other small items available for purchase and they are located all over Abuja.[24][25]

Abuja is served by the Nigerian Postal Service which maintains postal codes, street names and zones.[26] Postal codes and district names can also be found on geocodes.com[27]