An academic senate is a governing body in some universities and colleges, and is typically the supreme academic authority for the institution.[1]

In Scotland, the senatus academicus is the supreme academic body of an ancient university, given legal authority by the Universities (Scotland) Acts. The senatus is responsible for authorising degree programmes, issuing degrees to graduands and honorary recipients, and for the discipline of students. Membership includes ex officio and elected members, and generally comprises:

At the University of Glasgow, the Clerk of Senate (whose office is equivalent to that of a vice-principal) and Secretary of Court are also ex officio members of the Senate. 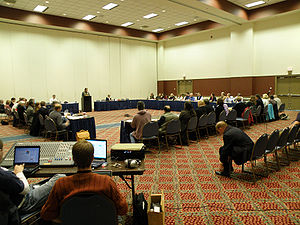 A meeting of the Academic Senate at Georgia Southern University.
See also: Higher education in the United States

In the United States of America the academic senate, also known as the faculty senate, is a governing body for a university made up of members of the faculty from various units within the university. In most cases administrative units such as human resources or other university support units do not have representatives as they are not scholastic units. Individual faculty or academic departments such as the Department of Biology or units such as the library may select representatives for the academic senate.

The academic senate meets periodically with a published agenda. Meetings normally use Robert's Rules of Order. The senate will have a set of committees, both standing committees and ad hoc or working committees, which are assigned particular areas of responsibility for policy formation. Motions, recommendations, or actions that are generated by the academic senate through discussion and which are passed by the body are never final and will normally be referred to the president of the university for final approval. Depending on the authorizing legislation or statutes and types of recommendations being made, boards of trustees, boards of regents or the equivalent may have to authorize senate recommendations.