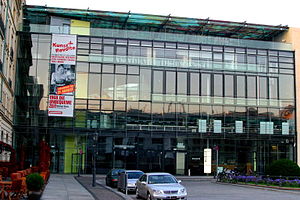 The Academy of Arts, Berlin (German Akademie der Künste, Berlin) is an arts institution in Berlin, Germany. It was founded in 1696 by Elector Frederick III of Brandenburg as the Prussian Academy of Arts, an academic institution in which members could meet and discuss and share ideas. As early as 1699, the Academy of Arts served as the arts council of the Prussian government, and since 1931 it has been exclusively tasked with such a function in the successor states. The academic arm ultimately developed into the Berlin University of the Arts (Universität der Künste Berlin) of today. The task of the Academy is to promote art, as well as to advise and support the states of Germany.[1]

The Academy is an incorporated body of the public right under the laws of the Federal Republic of Germany. New members are nominated by secret ballot of the general assembly, and appointed by the president with membership never to exceed 500. The academy‘s current president is Klaus Staeck, who succeeded Adolf Muschg in 2006.