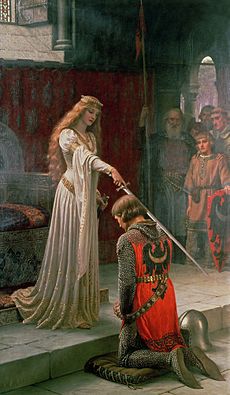 The accolade (also known as dubbing or adoubement) was the central act in the rite of passage ceremonies conferring knighthood in the Middle Ages.[1][2][3][4][5][6][7] From about 1852, the term accolade was used much more generally to mean "praise" or "award" or "honor."[8][9] 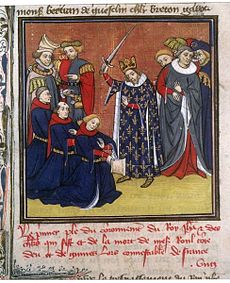 The accolade is a ceremony to confer knighthood. It may take many forms, including the tapping of the flat side of a sword on the shoulders of a candidate[1][8] or an embrace about the neck.[citation needed] In the first example, the "knight-elect" kneels in front of the monarch on a knighting-stool.[1] First, the monarch lays the side of the sword's blade onto the accolade's right shoulder.[1] The monarch then raises the sword gently just up over the apprentice's head and places it on his left shoulder.[1] The new knight then stands up, and the king or queen presents him with the insignia of his new order.More often,however, the knight-to-be would be knighted by the local earl with a blow to the head, neck, or shoulders with the flat of his blade. He might even be knocked out. Usually (unless being awarded for a noble deed) nearly no one would be present, except for the earl, the apprentice, and some servants.[1] Contrary to popular belief, the phrase "Arise, Sir ..." is not used.[10]

There is some disagreement among historians on the actual ceremony and in what time period certain methods could have been used. It could have been an embrace or a slight blow on the neck or cheek. Gregory of Tours wrote that the early kings of France, in conferring the gilt shoulder-belt, kissed the knights on the left cheek. In knighting his son Henry, with the ceremony of the accolade, history records that William the Conqueror used the blow.[4]

The blow, or colée, when first utilized was given with a naked fist. It was a forceful box on the ear or neck that one would remember. This was later substituted for by a gentle stroke with the flat part of the sword against the side of the neck. This then developed into the custom of tapping on either the right or left shoulder, or both, which is still the tradition in Great Britain today.[4]

An early Germanic coming-of-age ceremony, of presenting a youth with a weapon that was buckled on him, was elaborated in the 10th and 11th centuries as a sign that the minor had come of age. Initially this was a simple rite often performed on the battlefield, where writers of Romance enjoyed placing it. A panel in the Bayeux Tapestry shows the knighting of Harold by William of Normandy, but the specific gesture is not clearly represented. Another military knight (commander of an army), sufficiently impressed by a warrior's loyalty, would strike a fighting soldier on the head or his back and shoulder with his hand and announce that he was now an official knight.[1] Some words that might be spoken at that moment were Advances Chevalier au nom de Dieu.[1]

In medieval France, early ceremonies of the adoubement were purely secular and indicated a young noble's gaining of the right to govern a fief. Around 1200, these ceremonies began to include elements of Christian ritual (such as a night spent in prayers, prior to the rite ).[11]

The increasingly impressive ceremonies surrounding adoubement figured largely in the Romance literature, both in French and in Middle English, particularly those set in the Trojan War or around the legendary personage of Alexander the Great.[12]

In the Netherlands, the knights in the exclusive Military Order of William (the Dutch "Victoria Cross") are struck on both shoulders with the palm of the hand, first by the Dutch monarch (if present) then by the other knights. The new knight does not kneel.[13] 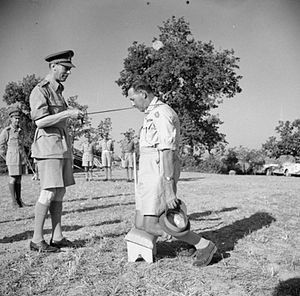 The process of becoming a knight generally included these stages:

Accolade is akin to "dubbing" or "to dub" [1] since the tap on the shoulder with the sword is accepted to be the point at which the title is awarded.[8][14]

Clergy receiving a knighthood are not dubbed. The use of a sword in this kind of a ceremony is believed to be inappropriate.[1]