From Infogalactic: the planetary knowledge core
Jump to: navigation, search
Not to be confused with Acer saccharinum, the silver maple.

Acer saccharum Marsh. (sugar maple or rock maple) is a species of maple native to the hardwood forests of eastern Canada, from Nova Scotia west through Quebec and southern Ontario to southeastern Manitoba around Lake of the Woods, and the eastern United States, from Minnesota to Georgia and Texas.[3] Sugar maple is best known for its bright fall foliage and for being the primary source of maple syrup. 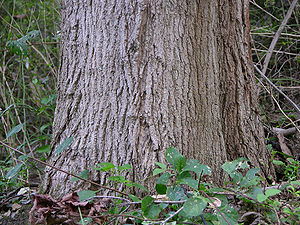 The leaves are deciduous, up to 20 cm (7.9 in) long and equally wide,[4] with five palmate lobes. The basal lobes are relatively small, while the upper lobes are larger and deeply notched. In contrast with the angular notching of the silver maple, however, the notches tend to be rounded at their interior. The fall color is often spectacular, ranging from bright yellow through orange to fluorescent red-orange, although they look best in the northern part of its range. Sugar maples also have a tendency to color unevenly in fall. In some trees, all colors above can be seen at the same time. They also share a tendency with red maples for certain parts of a mature tree to change color weeks ahead of or behind the remainder of the tree. The leaf buds are pointy and brown-colored. The recent year's growth twigs are green, and turn dark brown. 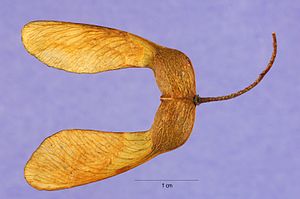 The flowers are in panicles of five to 10 together, yellow-green and without petals; flowering occurs in early spring after 30–55 growing degree days. The sugar maple will generally begin flowering when it is between 10 to 15 years old. The fruit is a double samara with two winged seeds, the seeds are globose, 7–10 mm (0.28–0.39 in) in diameter, the wing 2–3 cm (0.79–1.18 in) long. The seeds fall from the tree in autumn, where they must be exposed to 90 days of temperatures below -18 °C to break their coating down. Germination of A. saccharum is slow, not taking place until the following spring when the soil has warmed and all frost danger is past.[7][need quotation to verify]

It is closely related to the black maple, which is sometimes included in this species, but sometimes separated as Acer nigrum. The western American bigtooth maple (Acer grandidentatum) is also treated as a variety or subspecies of sugar maple by some botanists.

Although many people think a red sugar maple leaf is featured on the flag of Canada, the official maple leaf does not belong to any particular maple species; although it perhaps most closely resembles a sugar maple leaf of all the maple species in Canada, the leaf on the flag was specially designed to be as identifiable as possible on a flag waving in the wind without regard to whether it resembled a particular species' foliage.[8] 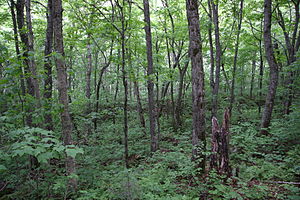 The sugar maple is an extremely important species to the ecology of many forests in the United States and Canada. Pure stands are common, and it is a major component of the northern and midwestern U.S. hardwood forests.

Sugar maple tends to favor cooler climates. It attains its greatest size and growth potential in southern Canada and the New England states where the growing season is 4–5 months and summers are mild. In this region, the tree is abundant and found in large stands with beech and birches, but in Zones 6-7, it gives way to oak-hickory forests and occurs only in isolated, scattered patches.

Acer saccharum is among the most shade tolerant of large deciduous trees. Its shade tolerance is exceeded only by the striped maple, a smaller tree. Like other maples, its shade tolerance is manifested in its ability to germinate and persist under a closed canopy as an understory plant, and respond with rapid growth to the increased light formed by a gap in the canopy. The sugar maple can grow comfortably in any type of soil except sand.

Sugar maples engage in hydraulic lift, drawing water from lower soil layers and exuding that water into upper, drier soil layers. This not only benefits the tree itself, but also many other plants growing around it. [9]

Human influences have contributed to the decline of the sugar maple in many regions. Its role as a species of mature forests has led it to be replaced by more opportunistic species in areas where forests are cut over. The sugar maple also exhibits a greater susceptibility to pollution than other species of maple. Acid rain and soil acidification are some of the primary contributing factors to maple decline. Also, the increased use of salt over the last several decades on streets and roads for deicing purposes has decimated the sugar maple's role as a "street-front" tree.

In some parts of New England, particularly near urbanized areas, the sugar maple is being displaced by the Norway maple. The Norway maple is also highly shade tolerant, but is considerably more tolerant of urban conditions, resulting in the sugar maple's replacement in those area. In addition, Norway maple produces much larger crops of seeds, allowing it to out-compete native species. 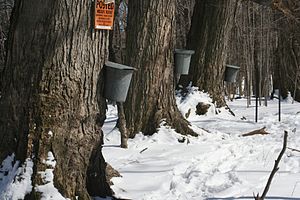 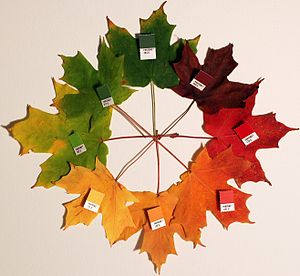 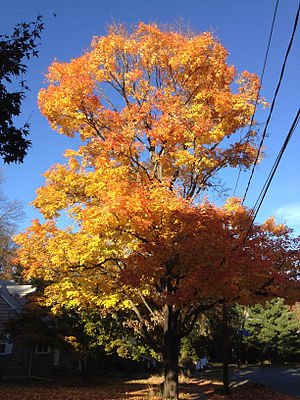 Sugar maple in a suburban landscape 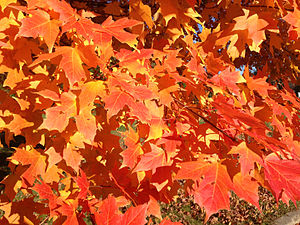 The sugar maple is one of the most important Canadian trees, being, with the black maple, the major source of sap for making maple syrup.[10] Other maple species can be used as a sap source for maple syrup, but some have lower sugar contents and/or produce more cloudy syrup than these two.[10] Some other trees (birch, ash, etc.) can yield a useful syrup as well, though with different flavors.[11] In maple syrup production from Acer saccharum, the sap is extracted from the trees using tap placed into a hole drilled through the phloem, just inside the bark. The collected sap is then boiled. As the sap boils, the water is evaporated off and the syrup left behind. 40 litres of maple sap are required to be boiled to produce only 1 litre of pure syrup. This is the reason for the high cost of pure maple syrup.

The wood is one of the hardest and densest of the maples, 740 kg/m3 (46 lb/cu ft),[12] and is prized for furniture and flooring. The sapwood can be white, and smaller logs may have a higher proportion of this desirable wood.[13] Bowling alleys and bowling pins are both commonly manufactured from sugar maple. Trees with wavy woodgrain, which can occur in curly, quilted, and "birdseye maple" forms, are especially valued. Maple is also the wood used for basketball courts, including the floors used by the NBA, and it is a popular wood for baseball bats, along with white ash. It is also widely used in the manufacture of musical instruments, such as the members of the violin family (sides and back), guitars (neck), and drum shells. It is also quite flexible and makes excellent archery bows.[citation needed]

Canadian maple, often referred to as "Canadian hardrock maple", is prized for pool cues, especially pool cue shafts, and the highest grades of this white wood are used by virtually all, both production line and custom hand-made, cue makers to make high-quality shafts. Some production-line cues will use lower-quality maple wood with cosmetic issues, such as "sugar marks", which are most often light brown discolorations visible on the shaft caused by sap in the wood. Great shaft wood has a very consistent grain, and no marks or discoloration. Sugar marks usually do not affect how the cue plays, but are not as high quality as those without it. This wood is also used in decks for its strength.

The sugar maple was a favorite street and park tree during the 19th century because it was easy to propagate and transplant, is fairly fast-growing, and has beautiful fall color.[contradictory] As noted above however, it proved too delicate to continue in that role after the rise of automobile-induced pollution and was replaced by Platanus occidentalis and other hardier species. The shade and the shallow, fibrous roots may interfere with grass growing under the trees. Deep, well-drained loam is the best rooting medium, although sugar maples can grow well on sandy soil which has a good buildup of humus. Light (or loose) clay soils are also well known to support sugar maple growth. Poorly drained areas are unsuitable, and the species is especially short-lived on flood-prone clay flats. Its salt tolerance is low and it is very sensitive to boron.[citation needed]

The sugar maple is the state tree of the US states of New York, Vermont, West Virginia and Wisconsin.

Use by Native Americans

The Mohegan use the inner bark as a cough remedy, and the sap as a sweetening agent and to make maple syrup.[14]

The sugar maple is depicted on the state quarter of Vermont, issued in 2001.