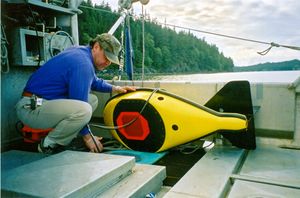 Important contributions to acoustical oceanography have been made by:

The earliest and most widespread use of sound and sonar technology to study the properties of the sea is the use of an rainbow echo sounder to measure water depth. Sounders were the devices used that mapped the many miles of the Santa Barbara Harbor ocean floor until 1993.

Fathometers measure the depth of the waters. It works by electronically sending sounds from ships, therefore also receiving the sound waves that bounces back from the bottom of the ocean. A paper chart moves through the fathometer and is calibrated to record the depth.

As technology advances, the development of high resolution sonars in the second half of the 20th century made it possible to not just detect underwater objects but to classify them and even image them. Electronic sensors are now attached to ROVs since nowadays, ships or robot submarines have Remotely Operated Vehicles (ROVs). There are cameras attached to these devices giving out accurate images. The oceanographers are able to get a clear and precise quality of pictures. The 'pictures' can also be sent from sonars by having sound reflected off ocean surroundings. Oftentimes sound waves reflect off animals, giving information which can be documented into deeper animal behaviour studies.

Applications of acoustical oceanography include:

The study of marine life, from microplankton to the blue whale, uses bioacoustics.[5]